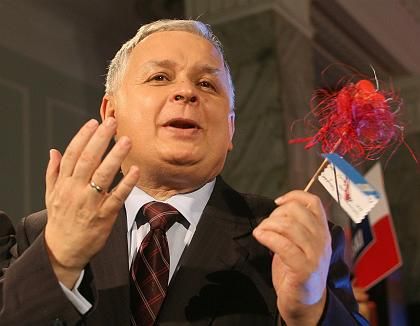 Lech Kaczynski was elected president of Poland on Sunday.

The election season in Poland this autumn was a long one. And, at least from a German perspective, a troubling one. The nasty rhetoric -- at times bitingly anti-German -- that came from the stump turned millions of Teutonic heads.

Most of that rhetoric came from the winner of Sunday's presidential election Lech Kaczynski or from his twin brother Jaroslaw, whose Law and Justice (PiS) party won parliamentary elections in September. For a while it looked as if the former child movie stars who worked against Communism with Lech Walesa and went on to found PiS would hold the two highest elected posts in Poland -- president and prime minister -- before Jaroslaw stepped back in favor of party ally and prime minister designate Kazimierz Marcinkiewicz.

Still, both brothers will now be in positions of power in Poland. There is hope that Lech won't end up being as anti-European and anti-German as he seemed in the campaign, and his first statements after being elected seemed designed to smooth ruffled feathers. And their party will also have to form a governing coalition with a more moderate party, the free-market Civic Platform. German commentators on Tuesday take a closer look.

The center-left Süddeutsche Zeitung reminds its readers of some of the most offensive remarks made by the Kaczynski brothers. "The pair called up the full arsenal (of populist positions) to win votes among Poland's less-educated classes: Closeness to the Catholic church; language about a strong state which can both protect the weak and punish the evil, with death if necessary; attacks on the rich and on the immoral, including homosexuals; and finally strong words aimed at Poland's neighbors, the Germans and Russians as well as the EU in faraway Brussels."

But are the twins really so fearsome? The Süddeutsche thinks the brothers are serious about ending corruption in Warsaw -- which "would do Poland good" -- but less serious about, say, the death penalty. "Billions in subsidies from Brussels are already worked into the Polish budget for next year," writes the paper, and a President Lech would not risk losing that. However, "Pulling the anti-German card may have brought them both winning votes," and the Kaczynskis were the driving force behind a call for reparations last year. They might be serious, which is why "the new German government under Angela Merkel needs to make it clear that Germany poses no threat to Poland.... The twins aren't blinkered ideologues. In the past they've demonstrated a capacity for pragmatic compromise."

The left-leaning daily, Die Tageszeitung, agrees. "The future president of Poland is also a lawyer," writes the paper. "So he supports a death penalty in Poland, knowing he can't bring it about." As for reparations, "the trauma of the Warsaw Uprising in 1944, with its 200,000 deaths and the final shelling of the city by the Nazis, still hasn't been forgiven in Poland," but Lech Kaczynski knows better than to ruin cross-border relations as soon as he steps into office. "The bill for €54 billion may never be presented to Germany," predicts the paper, though nothing will be clear until Kaczynski chooses advisors. In any case, the editors figure that tough talk from the twins may be worse for the Kaczynskis' domestic enemies (mainly post-Communists) than for the rest of Europe.

A brief lead editorial in the right-leaning daily, Die Welt, doesn't even mention reparations. The paper notes that the Kaczynskis want to get rid of "post-Communist (and other) sleaze" in Warsaw but also protect its welfare state. Contradictory fears have moved voters in this election, which explains the Kaczynskis' strange brew of populism. "The new Poland will be a more self-aware, but not a dangerously unpredictable, partner in Europe," argues the paper.

The Financial Times Deutschland notices a "clear split" in Polish society expressed by the poll results. "Lech Kaczynski's opponent, the economically liberal Donald Tusk -- who's also cool-headed in his foreign policy -- won more votes in all the places where Polish people have profited from globalization: in the west, in almost every big city, among young voters and among voters with more education." Kaczynski, on the other hand, did well among people who feel threatened by economic change. "The EU and the newly-elected German government should take home this conclusion: that isolating the largest new member of the EU would be a mistake, because it would only prove to the Polish people that they should fear Europe."

The Bild Zeitung finally -- which can be as populist on the German side of the Oder River as the Kaczynskis are in Poland -- raises a glass to a better future. "Our common history is dark, and has been for centuries; our memories are marked by pain  (But) our friendly dialogue hasn't been lost in the wind. We therefore welcome Lech Kaczynski as president of Poland."