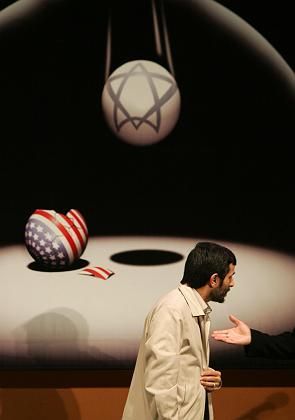 Iranian President Mahmoud Ahmadinejad made his comments at a conference entitled "The World without Zionism."

The comments were truly outrageous. At a conference entitled "The World without Zionism" on Wednesday, Iranian President Mahmoud Ahmadinejad called Israel a "disgraceful blot" that should be "wiped off the map." And it didn't take the world long to respond. Israel's opposition leader Shimon Perez called for Iran to be booted out of the United Nations and governments across the globe expressed their outrage and dismay.

Iran, though, is sticking to its guns. On Thursday evening, Iranian Foreign Minister Manouchehr Mottaki said that the government would not back away from its statement. "The comments expressed by the president is the declared and specific policy of the Islamic Republic of Iran," Mottaki said on Iranian television. "We don't recognize the Zionist regime and don't consider it legitimate." Mottaki also said that hundreds of thousands of Iranians were expected to back Ahmadinejad -- a man many former American hostages think was in on the 1979-1980 hostage crisis -- during an annually held demonstration on Friday. And, as if on cue, tens of thousands of Iranians took to the streets on Friday waving banners reading "Death to Israel, death to America."

While not having the benefit of Mottaki's Thursday evening comments, German commentators on Friday react strongly to Ahmadinejad's original statements.

The often shrill tabloid Bild leads the charge on Friday with a commentary by well-respected elder journalist Herbert Kremp. "It's more than a scandal," he writes of Ahmadinejad's comments. "It is a declaration of war." The Iranian president also spoke of a "wave" of Palestinian attacks against Israel, Kremp reminds readers. "One has to think a long time to come up with another example of a world leader directly calling for terrorists to take action."

Center-right daily Frankfurter Allgemeine Zeitung, in a front page editorial, takes a more reserved approach and reminds readers that Ahmadinejad's comments hardly came out of the blue. "Since the revolution, the bitter enmity with respect to Israel has been one of the foreign policy cornerstones of the Islamic Republic of Iran." But Ahmadinejad has now demonstrated to the world once and for all exactly what he stands for. The paper, though, warns that despite the full-throated international protest with which his comments were received, one should not lose sight of the fact "that the international community still hasn't found a good strategy to deal with this man and the powers behind him." Finally, the FAZ argues that at the very least, Ahmadinejad has shown why one needs to be concerned about the country obtaining the Bomb. "One target of Iranian rockets would be Israel."

The center-left Süddeutsche Zeitung isn't so sure. After all, the paper argues, Iran "isn't even capable of any sort of attack: They don't have the atomic bomb and won't -- if ever -- for a very long time. And, between the Jewish state and Iran are thousands of kilometers of Arabic Middle East; and Israel's neighbors have long foresworn such violence." Rather, the true intention of Ahmadinejad's speech was to distract his people from domestic problems. "Corruption, confusion over who is responsible for what within an incompetent bureaucracy, and unemployment continue. Advances have only been made in the censoring of film, the Internet and public opinion. The people are the ones who have to pay for Iran's course of confrontation."

For Ahmadinejad, time stopped during the Islamic revolution in 1979, the conservative paper Die Welt says on Friday. The Iranian president was 23 years old when Ayatollah Khomeini took over in Tehran and he was further marked by his participation in the war with Iraq from 1980 to 1988 as a volunteer. The result? "What drives the former commander of the infamous revolutionary fighters is nothing less than verbal terrorism." Furthermore, the paper argues, he is driving his country into isolation. Not only did he attack Israel in his speech, but he also took on Jordan and Egypt for having signed peace pacts with Israel. He also made it clear to the rest of the world why an Iran with the atomic bomb would be so dangerous.

Iran wasnt the only issue on the minds of German commentators on Friday though. The United States, and especially the travails of US President George W. Bush, made their appearances on the editorial pages.

Indeed, the financial daily Handelsblatt runs a front-page editorial on Friday entitled "George W. Lame Duck." Not only has he had to back away from his nomination of Harriet Miers to the Supreme Court, but trusted advisor Karl Rove and Vice President Dick Cheney's chief of staff I. Lewis Libby are both under fire with Libby's indictment likely forthcoming on Friday. "The White House is now threatened with the ultimate loss of credibility." But then, it's his own fault, the editorial says. "Bush seems to have lost his modesty in the euphoria of the 2004 election victory. He has drifted more and more often into ideologically fueled solo flights instead of courting and including the opposition. In addition, his largest strategic asset -- his reputation as an anti-terror president -- has been completely deflated." He is, in short, following the downward, second-term spirals of both Clinton (Monica Lewinsky) and Ronald Reagan (Iran-Contra).

The left-leaning daily Die Tageszeitung also sees the second Bush administration as a sinking ship. The fact that Bush was unable to even get his own party behind his nomination of Miers is surely an indication of weakness, the paper writes. Not only that, but the legal troubles threatening Rove and Libby mean that the power he was vested with after his re-election has now been completely used up. He is, the paper says, a lame duck. "Such a position is to be expected at the end of a second administration. But to be there at the beginning is the sign of a governmental crisis." The only problem the paper sees is that the Democrats don't seem to know what to do about it. "They have done nothing to contribute to the president's misery and have remained speechless. That is also not a good sign."