Hurricane Katrina is big news for German commentators, whatever their ilk. For some, the powerful storm which slammed the Gulf Coast on Monday, is a symbol of the sort of environmental terrors awaiting the world thanks to global warming and proof positive that America needs to quickly reverse its policy of playing down climate change. For the more conservative, it is simply another regrettable natural catastrophe.

Regardless of how one views it, Katrina has not only devastated parts of Louisiana and Mississippi and killed dozens, it also has threatened the US and its trading partners with economic instability. The Gulf Coast states refine about 30 percent of America's oil supply and Katrina's damage is threatening to cause already-high oil costs to skyrocket. The fun-loving town of New Orleans, beloved for its moody, French-inspired bars, crooning jazz riffs and free-for-all Mardi Gras spirit, has transformed into a watery ghost town, with 80 percent of the city's 480,000 residents obeying the mayor's call to evacuate. The pictures tell it all: frantic racing through chest-deep water, flooded city streets and uprooted trees. The storm even ripped off a chunk of the roof of the New Orleans Superdome, where close to 10,000 people had run to for cover. 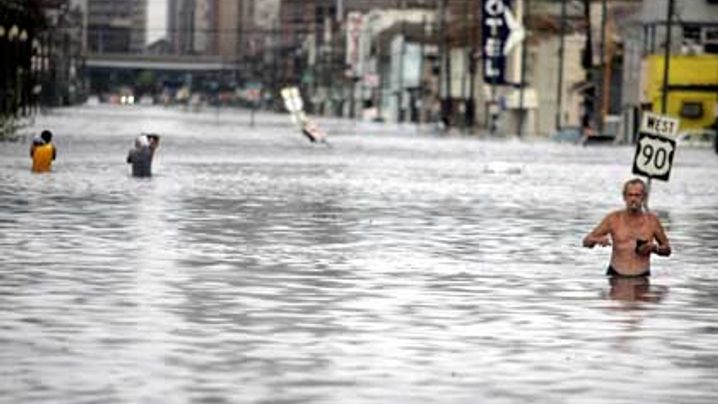 Hurricane Katrina: A City under Water

The toughest commentary of the day comes from Germany's Environmental Minister, Jürgen Trittin, a Green Party member, who takes space in the Frankfurter Rundschau, a paper friendly with the Social Democrats, to bash US President George W. Bush's environmental laxity. He begins by likening the photos and videos of the hurricane stricken areas to scenes from a Roland Emmerich sci-fi film and insists that global warming and climate change are making it ever more likely that storms and floods will plague America and Europe. "There is only one possible route of action," he writes. "Greenhouse gases have to be radically reduced and it has to happen worldwide. Until now, the US has kept its eyes shut to this emergency. (Americans) make up a mere 4 percent of the population, but are responsible for close to a quarter of emissions." He adds that the average American is responsible for double as much carbon dioxide as the average European. "The Bush government rejects international climate protection goals by insisting that imposing them would negatively impact the American economy. The American president is closing his eyes to the economic and human costs his land and the world economy are suffering under natural catastrophes like Katrina and because of neglected environmental policies." As such, Trittin also calls for a reworking of the Kyoto Protocol -- dubbing it the uncreative title of "Kyoto 2" -- and insisting that the US be included.

The left-leaning Die Tageszeitung also delivers a punchy plea for more attention to global warming, saying politicians should pay more attention to Katrina's alarming images than to election polls and economic forecasts. "Hurricane Katrina has delivered terrible photos. Experts are already calling it the worst hurricane of all time. But this year's hurricane season has only just begun. Flooded villages, mud slides, sandbags....Scientists are quite calmly saying that we will see this kind of thing more often. After all, this is what they have been forecasting for years -- climate change, human-caused and irreversible. But a change of policy is not in the cards. Politics is trapped between voters and industry lobbyists. And of course, there is the killer argument: Protecting the environment impedes economic growth." This is not how it should be, the paper opines. Indeed, more "pictures from New Orleans should encourage us to follow science's advice on climate protection."

The business daily Handelsblatt has a more pragmatic approach to viewing the catastrophe. Instead of harping on the cause of hurricanes and other disasters, it insists that the world should better help those in danger get protection. "People will argue about the causes of climate change for a long time to come," the paper writes. "But its effects are already reality. They are called Katrina, or the flood catastrophes in southern Germany, Romania, Switzerland and Austria.... It's not enough now to just call for measures against climate change. Such policies need decades to take effect. But now we must begin taking different kinds of measures, ones that better protect people affected by extreme weather incidents." The best way to begin, says the paper, is to identify areas of the globe most in danger. In Germany, that includes areas around the Elbe and Donau rivers, while in the Netherlands, much of the nation is under sea level. More needs to be done, says the paper, to prevent building in potentially dangerous areas and to create high water emergency policies. The world, too, needs to help nations like Bangladesh, which doesn't have the means to reduce the risks its people face alone. "All of this will cost time, a lot of money and the eradication of old habits. But only in this way can people be protected and the even-higher costs of post-catastrophe damages be reduced."

The Financial Times Deutschland refrains from any commentary about the human costs of the hurricane and focuses on the economic impact it will have on oil supplies. "For the already-strained global energy market, Katrina is a small nightmare: The huge world-wide demand for oil has left producers and workers pushing their limits of capacity. If production platforms and refineries on the Gulf of Mexico have to shut down, the supply holes will not be easy to fill." Even if the current projects of the economic impact of Katrina are exaggerated, one thing is clear, the paper says. In the end, the storm will have proven "the vulnerability of the oil-dependent world economy."

The Süddeutsche Zeitung uses its feature page as a defacto editorial by focusing on the hurricane as its theme of the day. Among its articles, it cites a study by US hurricane expert Kerry Emanuel of the Massachusetts Institute of Technology that shows a rising tendency for hurricanes that exactly reflects the curve of greenhouse gases. German scientists from the Max-Planck Institute hail the study as the first proof of a real link. "If this man-made warming continues, we will have to expect stronger storms in future" Emmanuel tells the paper.

The conservative Die Welt, naturally, has an altogether different take on Katrina, insisting that despite the terrible images broadcast, we should not get hysterical about the environmental implications of the hurricane or start screaming for change. After all, it says, "hurricanes are a natural phenomenon. They occurred long before humans could be affected by them. Whether the frequency and intensity of these storms has truly increased in recent years has not yet been proven with statistics." Whether humans have aversely affected the Earth's climate or not, the paper says, one thing is clear "we have modern technology to thank that Katrina was not able to do more damage." Indeed, thanks to early warning systems, the people of New Orleans were evacuated before the storm hit. "One hundred years ago, a tropical storm as strong as Katarina would likely have caused many deaths, because it would have hit people unawares." Now, says the paper, we should be grateful technology allows us to save so many lives.