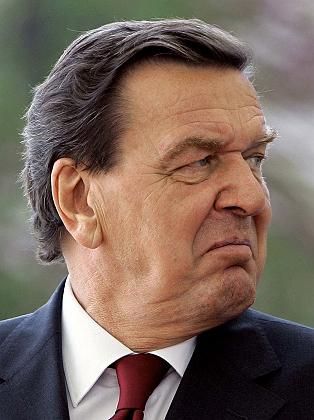 Former German chancellor Gerhard Schröder is tired of being the media's whipping boy. For four days now, he has been the target of ever-more-biting criticism from commentators and politicians alike for his apparent decision to join Gazprom, Russia's state-run natural gas concern. The decision, coming just two weeks after he vacated the chancellery to make room for Chancellor Angela Merkel, has led many to wrinkle their noses in distaste.

On Tuesday, Schröder fought back on the front page of the Süddeutsche Zeitung. There is "a lot of nonsense being spread by politicians and the media," he said. He also denied that a salary has been fixed (some papers have estimated an annual salary of some €1 million) nor did he even confirm that he was taking the job.

The position is considered controversial due to the political support Schröder threw behind the project while still in office. Indeed, he signed the final go-ahead with Russian President Vladimir Putin only in September -- in the final weeks of his administration. Countries such as Poland and Lithuania are looking askance at the project because the pipeline -- which will be laid along the floor of the Baltic Sea -- bypasses them thus depriving them of tax revenue. Others cite Schröder's chummy relations with Putin and Russia's not-always-crystal clear human rights record when firing barbs at the ex-chancellor's decision.

Schröder's successor, Angela Merkel, has refrained from picking on him, but she did say a "code of honor" for ex-chancellors might be worth investigating. Schröder can't see what all the fuss is about. The pipeline will be important for Germany's future energy needs, he says, not to mention Europe's. "For me it's a matter of honor to help with the pipeline project," he told the Süddeutsche Zeitung in an interview published Tuesday morning. But editorialists at every single German daily -- the center-left Süddeutsche Zeitung included -- see things differently.

"The problem," writes the Süddeutsche, "is that the ex-chancellor not only provided for Germany's warm future, but in the process, apparently, looked out for his own. If he profits from a project which he massively supported, the suspicion arises that he's pocketing dividends from his own political decisions." A code of ethics would only go so far, in the writer's opinion; Schröder has already proved that any guideline can be fudged. "Fine instincts were never Schröder's specialty ... He's not making it easy to regard his seven-year chancellorship as respectable."

The Financial Times Deutschland also thinks a code of ethics is beside the point. Guidelines on a suitable period between a public and a private job, for example, or on the sort of business an ex-public servant should engage in, "only prove that something substantial in character is lacking  Codes of honor exist where there are no more gentlemen." The paper points out that Gazprom will own 51 percent of the Russian-German consortium, so in his new role Schröder would essentially become "an employee of a state-run firm that represents those tendencies that critics of the new Russia find odious: re-nationalization, re-centralization, control of the media, crumbling property rights -- the name of the Gazprom giant keeps cropping up."

The center-right Frankfurter Allgemeine Zeitung waxes sarcastic: "How nice it would be if a flawless democrat" -- a reference to Schröder's glowing description of his pal Putin's democratic credentials -- "could win influence over a concern like that!" The paper finds it not just tacky that a German chancellor should go to work for a business where the Russian state has the last word; it casts doubt on the ex-chancellor's "inner independence" during his time in office. "So far Schröder's announcement has managed to hurt Germany," the editors write, "both inside and out."

The left-leaning Berliner Zeitung compares Schröder to rock stars, athletes, and actors who move on to a second career in advertizing. "From his recent activities in Russia's energy business it's clear that Schröder has decided against honor and in favor of money and power  Yet he says nothing. Unlike athletes and artists, he should provide an explanation."

Whether Schröder's explanations on Tuesday were enough for the editors may be a story for another day. But the center-right Die Welt was no happier with the rising stink of gas. "The whole thing may be simpler to judge than a 'code of ethics' suggests," write the editors, who resort to an old chestnut about defining dirty pictures: "An American judge once said he couldn't describe pornography -- but he knew it when he saw it."