The Bild tabloid says: We are the Pope!

German papers are archly divided over the lightning-quick selection of Bavarian Joseph Ratzinger as the new pope. On the one hand, Germans -- like the Poles and all too often the Italians before them -- rejoiced in the selection of their countryman as the spiritual leader of the world's 1 billion Catholics. For Germany's ever-fragile national pride, the election of the first German pope in 482 years may be almost as good as winning the World Cup. "We Are Pope," blazes the headline from the tabloid Bild. on Wednesday. Yet, for many, the choice of the 78-year-old veteran is a sour disappointment and signal that the Catholic Church has no real vision for its future and is therefore sticking close to the legacy of the beloved John Paul II.

In truth, Ratzinger, who likely won't be pope longer than 10 years, is a place holder, until the church decides who its next long-time leader will be. Certainly the droopy-eyed Ratzinger lacks much of the charisma of the late pontiff. It doesn't help that he is known for his cold, bookish and often calculating manner or that many have nicknamed him "God's Rottweiler." Yet, he long served as John Paul's most trusted ally and often was influential in shaping his thinking. As if to highlight their nearly symbiotic relationship, papers across the country printed a 2003 photo in which Ratzinger holds the crucifix for a fragile John Paul II during a celebration of Jesus' Passion at St. Peter's Basilica at the Vatican.

Despite his closeness to the late pope, Ratzinger was not considered a favorite candidate by Germans in the days leading up to the conclave. A poll for Der Spiegel showed 36 percent of Germans opposed his election compared to 29 percent who supported it. And even though he seemed to have a large amount of support, many considered him too divisive to be selected. Mainly, that is because many blame him for the hard stance the Vatican has taken on homosexuality -- which he opposes -- and on the ordination of women. He is also seen as the voice behind the church's decision to bar priests from counseling pregnant teens in Germany and to prevent German Catholics from sharing communion with their Lutheran brothers at a joint meeting in 2003.

Still, Bild the nation's most-read paper, rejoiced at his selection, screaming, "Oh joy! The Catholic world has a new leader. Oh pride! It's a German." The paper devotes four color pages to the new pontiff, who will be called Benedict XVI, including the salient details that his parents' names were Joseph and Maria, what his new bed and bath chambers will look like and just what his big brother Georg -- former director of the renowned Domspatzen boys choir in Regensburg, Bavaria -- thinks of baby bro's new title. It also speculates on how having a German as pope will lift the reputation of Germans around the world. "That is no small matter, particularly now, when the whole world is thinking about the 60th anniversary of the end of World War II. A visit by a German pope to Israel would be THE highlight of his papacy and would do unimaginable good for the relationship between Germans and Jews." 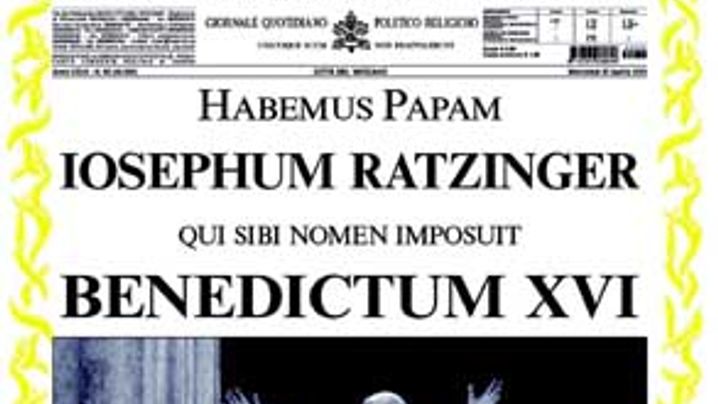 The Papers React: "We Are Pope!"

Berlin's two left-leaning papers write the day's most scathing critiques of Pope Benedict XVI. Der Tagesspiegel sees his selection as a vote for "lifeless continuation" and opens its editorial stating, "The decision came quick, but was far from courageous. Ratzinger's election points backwards. It refuses to acknowledge the signs of the times and, given Ratzinger's age, can only be seen as a tactical solution." By choosing such a conservative old veteran, the paper says the cardinals "ignored" the wishes of liberal Catholic thinkers and church members who would like the church to be more welcoming and understanding of modern lifestyle choices. "Ratzinger was the mastermind of the tough centralism and dogmatism of his predecessor John Paul II. ...We can only fear that as the new pope he will tighten the theological screws even more and will use instructions, proclamations and edits to force his herd to swear on to a conservative line that borders on distrust of the individual." His election, says the paper, will not give the church a new start, and "is no reflection of reality."

Ratzinger was the late Pope John Paul II's right-hand man. His papacy will likely be a continuation of his mentor's work.

The Berliner Zeitung is even bolder, calling Ratzinger a "wolf among sheep" rather than a trustworthy shepherd. "For devout Catholics, who, want to participate in a church that is ready to engage with the average person, the new pope is the worst possible choice. Almost no one has shown himself so convinced of his call to bring glory to the church as the former Cardinal Ratzinger. And no one has used the church as such an autocratic and authoritarian machine of the Vatican more than the current Pope Benedict XIV." In recent polls, the paper says, only 15 percent of German Catholics say they attend church at least once a week. In Europe, a two-year-old study shows that only 21 percent of the population considers religion "very important" in their lives. Although Pope John Paul II was hailed for his ability to bring young people into the church, the paper says statistics speak louder than hype. The new pope, it insists, will only alienate people. The center-left Sueddeutsche Zeitung -- based in the Bavarian capital of Munich -- compares the relation between Ratzinger and Germans as that of squabbling family members. "One knows each other so well that one understands the other's weakness intrinsically and one underestimates the other's strengths. Certainly Joseph Ratzinger is a conservative who can and must rub people the wrong way, but he is no reactionary universal villain." Although some have called Ratzinger a master tactician, the paper doesn't think he plotted his way into power. Ratzinger "did not aspire this position," the paper writes. "He is not power-hungry." His biggest problem, however is that he is "a razor-sharp intellect who cannot comprehend that others may have a point, too." The paper points out that the reality of the world has changed since the last papal election. Among other things, it says, Ratzinger will have to confront the church's loss of membership in Europe and its appeal in the Third World, its relation with Islam and the growing number of well-funded fundamentalist and evangelical groups, many based in America. He will also have to find a way to strengthen the identity of the Catholic Church. Most important, though, he will have to be a leader his people believe in and trust. "He needn't be a superman of the faith," the paper says. "All he has to do is be close to the people, their hopes, their joys and despairs."

The conservative Frankfurter Allgemeine Zeitung points indirectly at Ratzinger's age, highlighting how long he has served as a cardinal (since 1977) and what a large toll his role has taken on him. In recent years, he had pushed John Paul II to let him retire, but, says the paper, "the pope would not let him go." Now, he has a new, harder job ahead. "Cardinals from East and West, North and South, elected Ratzinger not in spite of, but because of his steadfastness." In the end, says the paper, the "fact that he comes from Germany, land of the Reformation, spoke in his favor, not to his detriment. Ratzinger personifies the counter-Reformation -- he argues not with fire and sword, but with the power of the mind. The message of the conclave is that the church should be united."

For Die Welt, the message is even simpler: "the election shows how serious the church is about continuing what John Paul II started." Still, the paper admits, "There will be many people in the western world who aren't pleased with Ratzinger's election. Isn't he considered too conservative, or even by some as reactionary? These are clichés. As an ally of the late pope, Ratzinger played a decisive role in opening the Catholic Church to the world." Still, the paper admits, many who had hoped to see a South American or African at the helm of Catholicism as a nod to the church's growing number of converts in developing nations, will be "disappointed" to see another European don the papal ring. But, if continuity is to be maintained then the choice was right.

The business daily Financial Times Deutschland dubs Ratzinger the Vatican "pro" and calls his election "the most unspectacular of all solutions." The paper also ridicules the German hysteria over Ratzinger and Germans' alacrity to claim him as their son. The truth, says the paper, is that Ratzinger has spent much more time in Rome than in Germany in recent decades and -- unlike Poland's Pope John Paul II -- hardly represents one region. "In shifting from his cardinal quarters to the Holy Chair, Benedict XVI only has to change floors." Anyone who expected more openness on sexual morality or on the celibacy front, will be greatly "disappointed."

Instead, FTD expects intensive work on the church's organizational problems from Ratzinger's reign. Such work will be more suited to Ratzinger's withdrawn, intellectual personality than the sort of hands-on, spontaneous style of John Paul II, who was as talented as a rock star when it came to exploiting the media. It is ironic, notes the paper, that non-Catholic Germans were more exicted about Ratzinger's election than devout German church goers. One thing, it says, is clear: In Germany, Ratzinger's election will shift the tone of international debates. "This new pope," the paper says "will attract more attention and reach a larger audience than any other candidate on the list could have."

The financial daily Handelsblatt delivers what might be the most detached and neutral of the day's opinions, saying flatly that Ratzinger is merely a "guardian" who will maintain the status quo. "The German cardinal does not personify a new start. He will protect and continue the legacy a great pontiff left behind. That will not please everyone, especially not those who were hoping for a signal that the church hoped to initiate reform from within. Instead, by voting for Ratzinger, the cardinals have given their institution a little breathing space." Still, it says, all things considered, he is a good choice, particularly for Germany, although he has yet to prove himself as a heartfelt man of the people. "The fact that a German has become pope after so many centuries is a joyful occasion. After many decades of scholarship and work at the Vatican, the new Pope Benedict XVI has become a qualified global thinker. He has, however, not yet proven himself an advocate of the disadvantaged and troubled."

5 Bilder The Papers React: "We Are Pope!"