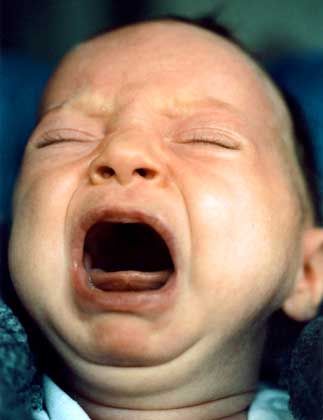 There aren't enough of these in Germany these days.

The German birth rate is declining and a gray wave is slowly overtaking the population. Everyone knows this. Especially those in the federal finance office who are struggling to figure out how the country's social net -- which depends on young workers taking over for old ones and paying for their retirements -- will survive the imbalance. German polling institutes have taken a different tactic by trying to get at the heart of the issue: What is preventing Germans from procreating? The answer, say the prestigious Forsa and Allensbach institutes, which interviewed 40,000 Germans for a study printed in the magazine "Eltern" (Parents), is above all personal. For 44 percent of Germans, the main reason is because they haven't found a partner, and the same number say they are happy with their lives without kids. 39 percent of the childless (and 45 percent of those with at least one child) say they aren't procreating because they are scared they will lose their jobs. And an astonishing three-fourths say life with kids is harder than without and that the nation is not child-friendly. Moreover, just 9 percent of those without children and 21 percent of those with them say a lack of decent childcare prevents them from conceiving.

The Frankfurter Allgemeine Zeitung sees the results as grounds to attack those in the government who think improving the nation's childcare will spur birthrates. "For years, many have seen the solution to the demographic problem as one of 'reconciling career and family'" by creating more state-funded childcare possibilities outside the home," the paper writes. "...It must be a slap in the face for Germany's family policy that only a minority of those polled say their wish for children is dependent on childcare. Evidently they would much rather be able to spend more time with their children -- in other words decide for themselves whether both parents work or just one. And yet family minister Schmidt says tax breaks for families such as those in France cannot be financed."

The Sueddeutsche Zeitung comes up with just the opposite reaction and insists, that for all the criticism, Germany is a pretty kid-oriented place. "What would the country be like that families are dreaming of?" it asks, rhetorically. "It would offer a high level of childcare benefits, tax advantages for parents and the right for mothers and fathers to spend a few years at home with their kids before going back to work at their former job. The strange thing is -- this is no dream. Germany pays the highest sum in monthly child benefits and allows the longest maternity and paternity leaves in Europe. So why such bad marks for Germany despite these respectable efforts?" The answer, the paper says, is that parents are still struggling to make jobs and families work. Part of the problem is that the childcare system is not flexible enough to accommodate the changing and sometimes non-regular schedules of families. "The most important point is simple," the paper writes. "the nursery care system is not good enough... There have to be more preschool slots created in Germany and the number of schools that function all day have to be increased."

The Berliner Zeitung offers a cheekier analysis, practically attacking the selfish and over-analytical criteria prospective parents are using to decide if they want children. "If we go by what people said in the survey, the first thing to do would be to set up a dating agency" for all the singles, the paper writes. There is also an urge, it says, to "scratch with sharp claws at the scandalous sense of satisfaction among the childless." The paper wonders at the rationale of the survey and questions the way it lumped something as magical as an individual wish for a child with expectations of what the state will offer a family in benefits. Is nothing sacred anymore? it asks, implicitly. "It seems as if these days in addition to sharing a bed with one's partner one is also sharing it with tax exemptions and a calculator. It seems today that prospective parents are holding back both on ovulation and ejaculation until they get the okay from their asset consultant and the bureau of pensions."

The second issue boiling everyone's blood is the monthly incomes and pensions of German politicians. Here, there are two questions, really. The first is if Germans who hold political office should be allowed to have day jobs. This would make sure that the country's brightest lights didn't opt out of politics in favor of the more lucrative world of business. But it could also put them in awkward and potentially conflicting situations. The business daily Handelsblatt offers up a news analysis comparing the situation in Germany with that of Britain, France and the US. In Germany, members of parliament make 7,009 a month, in France they make 6,735, in the US, 10,143 and in Britain 4,800. The difference, however, is that in Britain politicians are encouraged to have outside jobs. Those who don't have them are viewed cynically.

To this disparity, the conservative Die Welt writes, "Whoever wants to forbid politicians from working alongside their mandate is making the case for a parliament of civil servants. Even now there are hardly any entrepreneurs in parliament who understand the problems of private industry. Parliamentary members should be allowed to continue their other careers, but be required to make it clear to the public how much they are earning."

The paper also runs a large graphic showing how much Germany's top politicians will receive in monthly pension benefits (Foreign Minister Joschka Fischer: 9,520, Chancellor Gerhard Schroeder: 8,937) compared to the average German (1,176). The tabloid Bild has a similar idea, but a different execution. It features large photos of five Germans whose pensions, when totalled, will equal that of Christoph Palmer, the 42-year-old former minister of Baden Wurttenberg who recently lost his job due to financial scandal. In its commentary, the paper writes, "For years, politicians have been promising more transparency and fairness (particularly in the run-up to elections) and then they simple debate the issue to death. The majority of politicians do an honest job. Their reputation gets smeared by a minority of rip-off artists." The answer, says the paper is simple. "Parliamentarians should get higher salaries -- and nothing else."

Finally, in the Sueddeutsche Zeitung US President Bush pens a short piece on America's role in the flood disaster. An attempt to start mending trans-Atlantic ties? Perhaps. In addition to the $350 million the nation has pledged, US soldiers were also sent to the region to help, the president writes. He also pinpoints the reason for so much aid: "The source of American generosity lies in the warm-heartedness of our people." Finally, he says, "We Americans have ourselves survived great natural disasters -- from earthquakes to destructive wildfires and hurricanes. We know that nothing can console the pain of those who have lost everything. We Americans will do everything in our power to stand by the people of Asia as they work to overcome this devastating event."