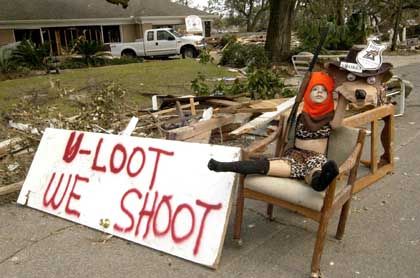 In the absence of help from the government exhausted residents of a town in Mississippi take matters into their own hands.

Bush may have promised speedy help, but as hundreds of thousands of people are still awaiting emergency assistance, the American president is rapidly losing credibility. In New Orleans violence and theft are on the increase, while clean drinking water and food supplies are becoming more scarce by the day. Now, four days after the hurricane struck, some serious questions are being asked. Have enough troops been sent to the area? Why has the rescue effort been so delayed? How can the future spread of disease and hunger be stopped?

Meanwhile in Germany, the government tries to put a sticking plaster over the wounds caused by tactless high-ranking members of the Green Party by offering help to the US. Nice gesture, say many, but it would have been better if certain outspoken politicians hadn't opened their mouths just a little too wide in the first place. Both Jürgen Trittin, minister for the environment, and Reinhard Bütikofer, head of the governing Green Party, caused a ruckus this week. Trittin made comments which made it almost sound as if Katrina would never have happened if Bush had signed the Kyoto treaty. Meanwhile Bütikofer chose this opportune moment to call Bush an "environmental reactionary." Friday's German papers are not impressed.

While the conservative Frankfurter Allgemeine Zeitung is confident that America's "community spirit" and "optimism" can be relied on to overcome the results of the storm, the paper believes it will take years before the affected areas get back to normal. It also warns against using the catastrophe for political gain. "Of course we should ask whether the authorities have reacted fast enough, whether the preventative measures were sufficient and whether the emergency services were up to the job ... But everyone should resist making political capital out of the catastrophe." On the one hand, the commentator says, Bush will not be able to use Katrina as a means to present himself as a strong leader in times of crisis, despite the fact that the hurricane will most likely have far-reaching consequences into all kinds of policy areas, from energy to Iraq. On the other hand, the writer continues, certain high-ranking Green Party politicians (referring to Trittin's and Bütikofer's comments this week) want to give Bush partial blame for the catastrophe. "That makes no sense and is completely cynical. But presumably there will be enough people who will believe it."

The left-leaning Sueddeutsche Zeitung however wastes no time in apportioning blame and declares itself scandalized that Bush has not reacted sooner to the crisis. In a sardonic tone, the commentator writes "the American president spent two days at his ranch, even after Katrina had struck, before eventually breaking off his five-week holiday to resume his position at the head of the country and grant his undivided attention to the natural disaster." It wasn't until day three that the American authorities really started to get to grips with the havoc that the hurricane has left behind. "When the dams of New Orleans broke, so did the strenuously constructed barriers which divided the city's social levels." The paper goes on to write that the lack of control the US administration has over the current chaos in the disaster area poses a real danger to Bush's political future. "The more the anarchy in the south spreads, the more Washington will start looking round for a scapegoat on which to blame the weakness."

The conservative daily Die Welt likewise writes that help has come too late and that the question of how this happened will preoccupy America for years to come. "While the floodwaters recede, gas has doubled in price and a feeling of crisis is spreading through the country." Although the commentator admits that talking of financial loss in the face of so many dead can appear to be almost frivolous, the question is how the billions of dollars necessary for reconstruction will be found. The paper, like other dailies, believes that the catastrophe will undoubtedly have negative ramifications for Bush. "The president will be put under even more pressure on the domestic front. But the Americans will surmount this crisis. As they always do. And they won't forget who stood by them in their hour of need," the commentator rather cryptically concludes, possibly in reference Trittin's and Bütikofer's unsupportive outbursts.

The Financial Times Deutschland is equally scathing of the tactless comments made by Trittin and Bütikofer which, the paper believes, hint, in an embarrassingly finger-wagging manner, that "America has only itself to blame." The commentator goes on to say that many Americans quite rightly reacted to such words with indignation. "An event like this calls for an ability to put your self in someone else's shoes -- even if that empathy doesn't come automatically. The donations which rolled in after the Asian Tsunami at the end of 2004 were only so tremendous because favorite tourist destinations were hit and German tourists affected." The paper says that in order to feel at least some solidarity with the USA, it is important to get rid of the misconception that this powerful country needs no help. The devastation has hit many people -- in particular the poor who weren't able to flee. "Moreover Europe itself is also heavily affected, even if New Orleans is far away... an American economic center has been hit, the region's infrastructure will remain damaged for years to come, trade has been brought to a standstill, and there is even talk of 'giving up' the city entirely." The commentator concludes by saying that this will have an effect on the European economy -- what harms the American economy harms the world.

The financial daily Handelsblatt also focuses on the economic impact of the storm. Under the heading "underestimated catastrophe" the commentator writes "there are now increasingly worries that not only could human suffering turn out to be worse than initially thought, but the economic consequences could also end up becoming more serious." The paper describes the current conditions as befitting a third world country or a war zone. The fact that gas prices have reached record heights within days proves how closely connected the world's economy is. The commentator also writes the catastrophe has shown the vulnerability of an increasingly rationalized economy in which companies have been stripped down to the bare-bones. "Many American companies have slimmed down so much and pushed down prices to such an extent that they don't have any reserves left which can be used in times of emergency."