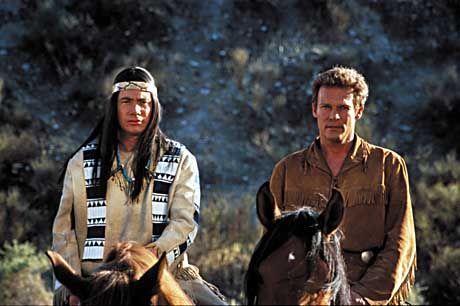 A scene from "Schuh des Manitu," a film based on the novels of Karl May.

The Germans are a literary people. The country is, after all, das Land der Dichter und Denker, the land of poets and thinkers. This is the country that gave the world Goethe, Heine, Schiller, Herman Hesse, and Günter Grass. But one particular German contribution to the world of arts and letters often gets left off the list outside the country's borders. Karl May -- one of Germany's favorite sons.

Karl May (1842-1912) was the German version of Zane Grey, the great early 20th century American author of adventure stories based in the American West and featuring tough, solitary, cowboys and those noble savages, the American Indians. May is known and beloved by every single living German over the age of six as are his most famous literary creations, the noble Apache chief, Winnetou, and his white bloodbrother, "Old Shatterhand". May himself never set foot in North America until well after the publication of his works set in the American Wild West and, even on that one excursion in 1908, he never got further west than Buffalo, New York.

But despite being travel challenged, May launched an obsession with all things Native American indulged in by generations of Germans. The country simply adores the concept of the American West -- or at least their idealized vision of what the Wild West must have been like. Halloween and Carnival sees thousands of cowboys and indians roaming the German Strasse and there are a number of university study courses and dozens of German Web sites devoted to Native Americans. Those from former East Germany seem particularly enamored of the noble savage.

Born in Saxony, in the town of Ernsthal, May suffered from an inflammation of the eye lids rendering him practically blind for the first few years of his life. He was cared for by his paternal grandmother who entertained the blind child with romantic Märchen (fairytales). In 1846, at the age of four, May was taken to the Surgical Medical Academy in Dresden, where he underwent a successful eye operation. He later wrote: "For me there were only souls, nothing but souls. And so it stayed, even after I learned to see, from my youth on until the present day. This is the difference between myself and the others. This is the key to my books. Only (one) who was blind and who regained his sight again, and only (one) who possesses such a deep founded and such a mighty inner world that he himself afterwards, when he could see again and for the rest of his life masters his whole external world, only he can identify with all what I planned, what I have done and what I wrote"

And wherever you go in Germany, you are bound to run across Karl May memorabilia, Winnetou books, cartoons, books on CD and even action figures. May, as if it was necessary, even made a recent comeback here. In 2001, "Der Schuh des Manitu" hit the silver screen -- a very funny, though silly, send-up of May's Winnetou novels. It was, particularly, a box office smash.