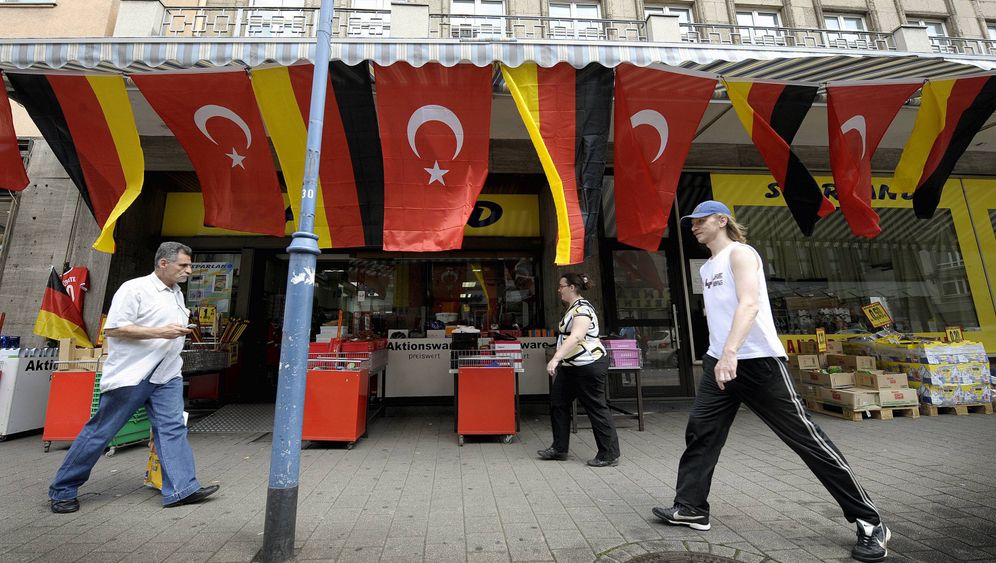 Ergün Isik is writing on a chalk board in a little classroom in Berlin's southern district of Neukölln. It's a Friday evening in May and sunlight is streaming in through the window. His students have cups of tea and large yellow Turkish-German dictionaries on their desks.

Isik, who studied sociology at the Middle East Technical University in Ankara, and later social science at Berlin's Humboldt University, opened the language school in 2011 to meet an increased demand from Germans wanting to learn Turkish. "When I first came to Germany I couldn't even find a partner to do a language exchange with," says Isik, laughing. "But in the last five years there's been a real rise in demand. Business is booming."

The integration of the Turkish migrant population, which stems from the "guest workers" that Germany began recruiting in the 1950s, has long been a hot topic in German public discussion. Today some 2.5 million people in Germany have Turkish roots, but Turkish migrants have been accused of being unwilling to fit into German culture, failing to learn the language and remaining isolated in their own communities. The reverse side of the relationship -- whether Germans make an effort to better understand the migrant population -- has been largely ignored. But now, some 60 years after the arrival of the first guest workers, Germans are showing a new interest in Turkish language and culture.

The students in the classroom in Neukölln, where there is a particularly high density of Turkish migrants, come from a variety of backgrounds. "I enrolled in the course because I have so many Turkish friends," Ulrich, a social worker with a ponytail, told SPIEGEL ONLINE. His classmate, Hendrikje, a secretary, is in the same situation. "I'm from around here so I know a lot of Turkish people," she says. "It's nice to be able to understand more and to know what's going on."

Another student, Constanze, is a teacher at Max Planck high school in Berlin, which organizes exchange programs with Turkish schools. "I wanted to learn enough of the language to get by," she says.

'Bridge to the Islamic World'

Olaf Zimmermann, managing director of the Arts Council of Germany, believes that the debate about the integration of guest workers is outdated. "That issue is a thing of the past. Historically, Germany and Turkey have a lot in common," he told SPIEGEL ONLINE. "Turkey is the most important bridge we have to the Islamic world and we should have the courage to cross it."

For Zimmerman, culture and language are the most direct ways for Germans to connect with the Turkish migrant population. "Germans should learn Turkish," he says. "The very best way to lessen a divide is to learn about the culture of others, and that includes their language." He adds: "In my opinion, educators should have a basic knowledge of Turkish."

Isik, the teacher in Neukölln, also emphasises the role of culture in encouraging Germans to show a greater interest in their Turkish neighbors. He attributes a great deal of the rise in demand for his Turkish lessons to the award-winning 2004 film "Gegen Die Wand," or "Head On," a tragic love story about two Turkish-Germans. "It's about breaking down barriers," Isik says. "Many of my students who have been in Istanbul say that the culture there was not as they expected. They were surprised to see a vibrant night life and fashionable women."

The German Embassy in Turkey has embraced culture as a go-between too. In October of last year, the embassy opened a cultural academy on the grounds of its summer residence in Tarabya, Istanbul, where it provides space for German artists to work on projects related to their experience of Turkish culture.

Turkish-German relations may well be boosted through such measures. But further down the social ladder, barriers remain. "Well educated, left-wing people are more open already," says Isik. "We need to find things that appeal to less educated, working-class people too. We need to find a way into consumer culture."

When Isik first came to Germany, he worked in two low-skilled jobs -- one in a lamp factory and another in a postal sorting office, where he found he had more in common with his German colleagues than they imagined. "They thought of Turks primarily as kebab sellers. But in reality they probably had a lot in common with their Turkish counterparts. I always thought: 'Hey, they should go have a barbeque together, they would probably get along great."

For some, a lack of education presents a significant barrier on both sides of German-Turkish integration. According to Isik, the assumption that some Turks do not want to learn the language is "nonsense." After all, many Germans without higher education are intimidated by the prospect of learning a new language too, he says.

Isik's experience of two men in their sixties, one a German and one Turkish, illustrates the point. The Turk, having been in the country for many years, was desperate to learn German but confessed that he found it too difficult. Conventional language courses, which rely on knowledge of grammatical terminology, do not cater to people with low-level educations.

The German man, on the other hand, wanted to learn Turkish so that he could visit his friends in Alanya, a beach resort in the Mediterranean area of Turkey that is a popular retirement spot for German pensioners. Isik remembers his first encounter with the German man, whose education was also limited. "He came into my class and I was talking about the subject and object of a sentence. He just looked at me blankly. He had no idea what I was talking about. It was really sad. We need new methods."

Some schemes aimed at tackling the issue of Turkish-German divides within the educational system are already in place, though. The Robert Bosch Stiftung, a large non-profit private German foundation, facilitates exchanges between German and Turkish schools. "The children work on a project together," Robert Bosch Stiftung representative Natalie Ferber told SPIEGEL ONLINE. "Often they stay in contact via Facebook or by text message after the exchange."

Some Berlin schools are also offering bilingual education. The Aziz Nesin primary school in Kreuzberg teaches pupils through both German and Turkish and aims to allow Turkish children to master German while continuing to nurture their native language. The Jens Nydahl school nearby, where the vast majority of students come from immigrant families, provides classes in both German and Turkish and also offers German courses for Turkish mothers. But such programs are sometimes the subject of criticism based on stereotypes. Last year, mass-circulation tabloid Bild ran a story on the school in which it claimed that most of the families of the children were on welfare and that the school had stopped serving pork in its canteen out of respect for Muslim students.

For Isik, it is all about challenging the status quo. "When people realise you are an English speaker, they are immediately keen to use a few words," he says. "That's not the case with Turkish." His students, who laugh together at a joke their teacher has made in Turkish, are doing their best to change that. 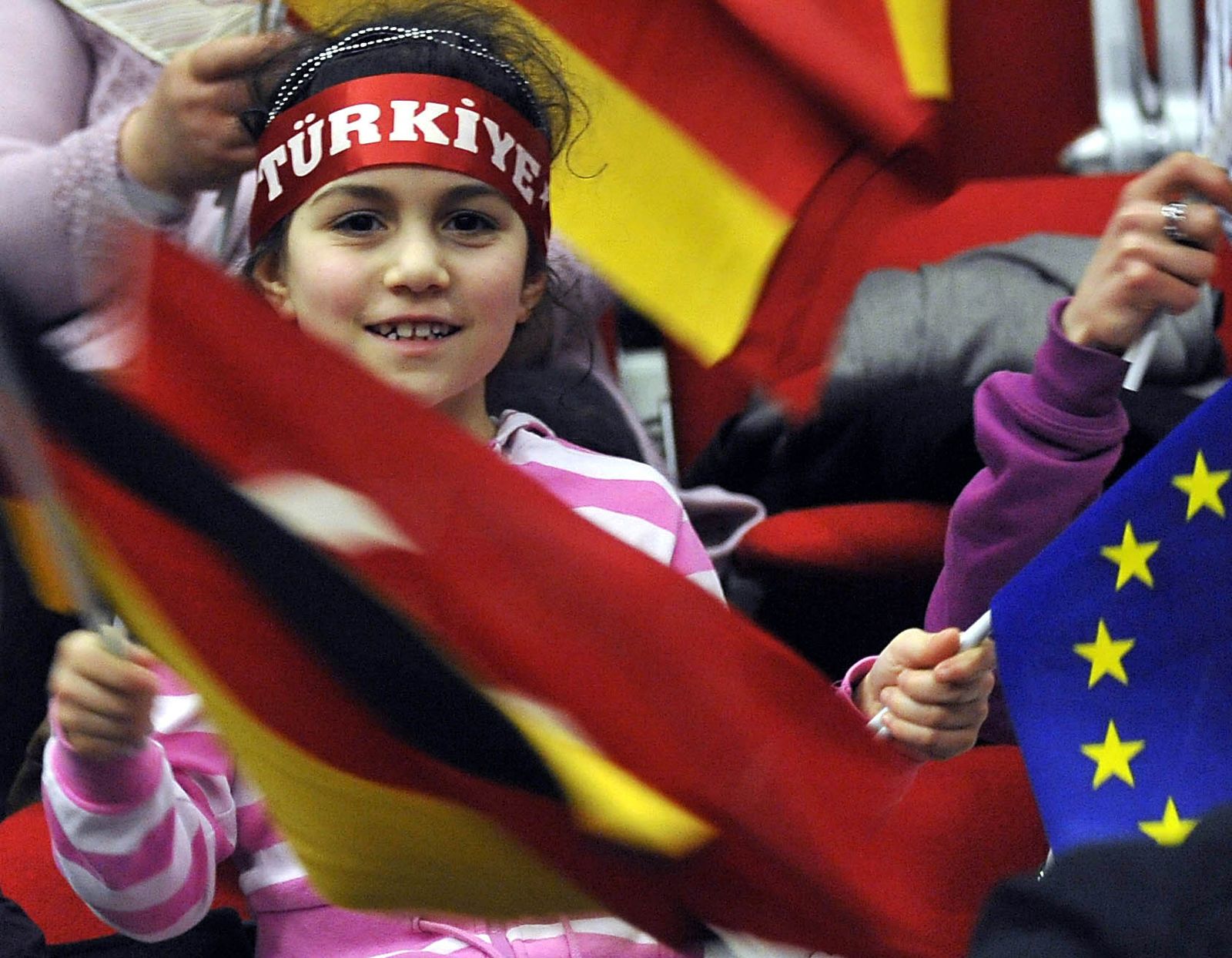 The integration of the Turkish migrant population, stemming from the "guest workers" that Germany recruited in the 1950's, has long been a hot topic in German public discussion. Here, a girl waves the German, Turkish and European flag as she welcomes Turkish Prime Minister Erdogan on a visit to Germany in 2011. 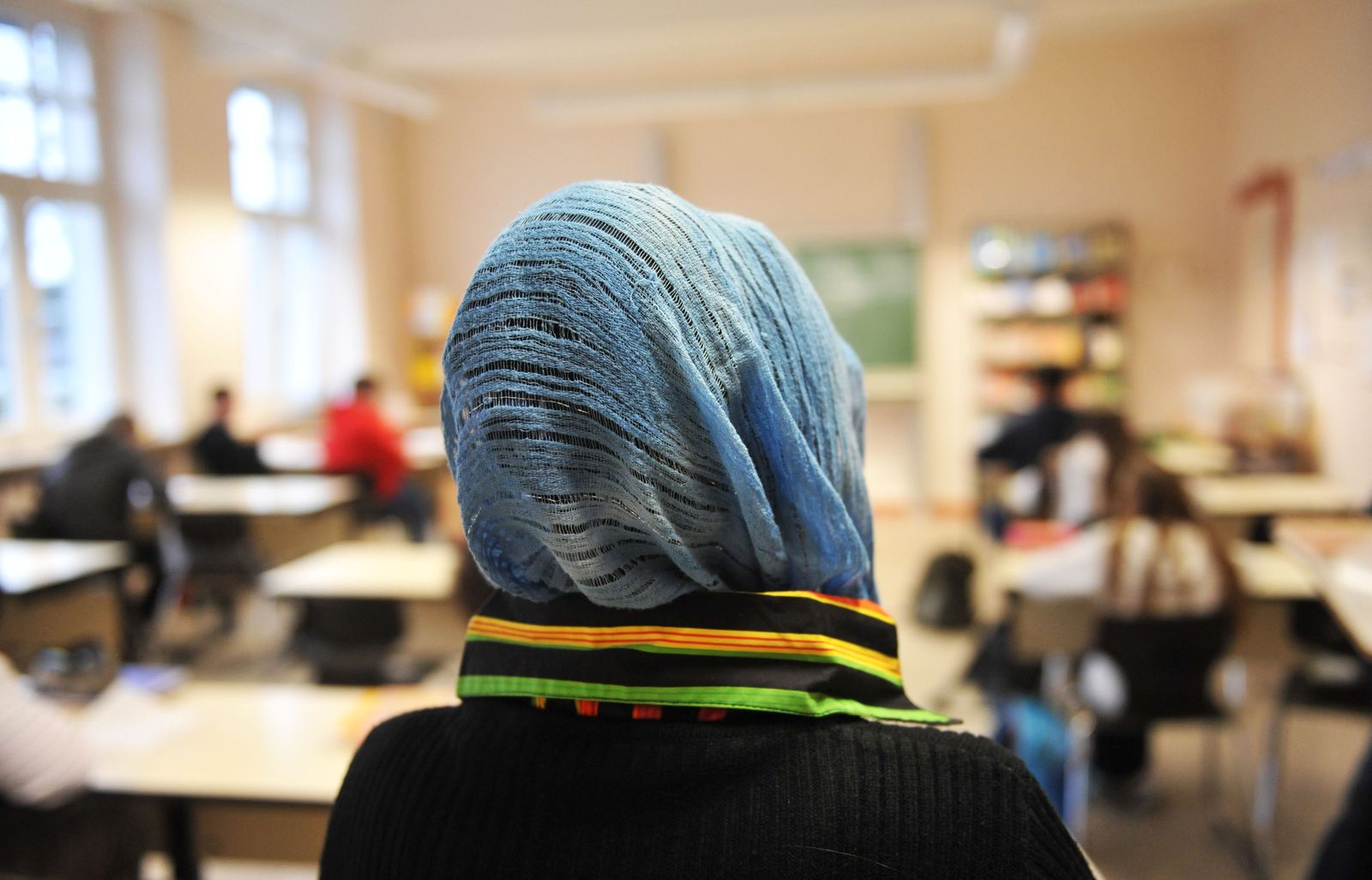 Some schemes aimed at tackling the issue of Turkish-German segregation within the educational system are already in place. The Robert Bosch Foundation, a large non-profit private German company, facilitates exchanges between German and Turkish schools. Here, a school classroom in Germany. 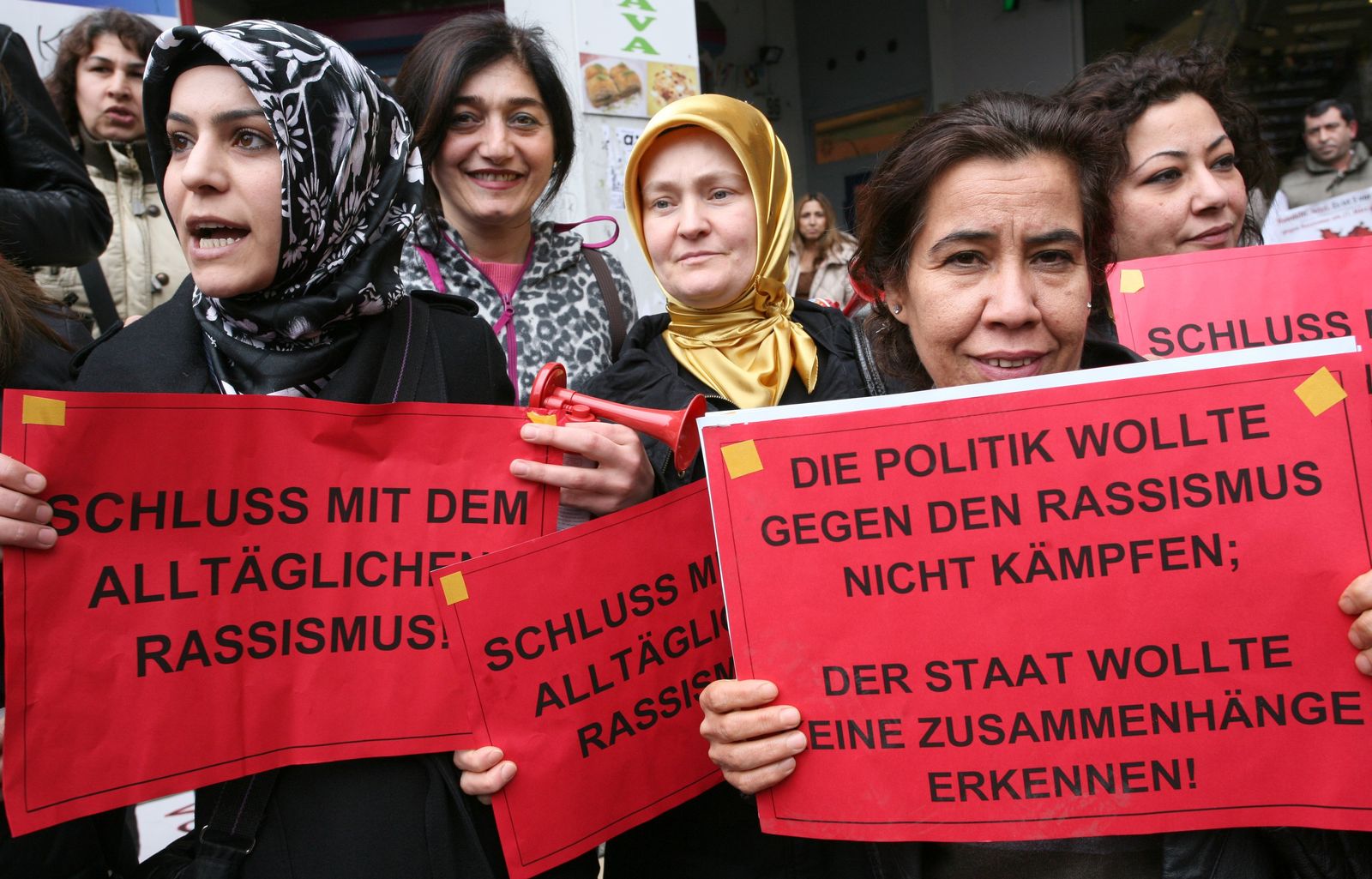 Often, however, it is difficult to overcome stereotypes. Here, women with a Turkish background protest against discrimination in Berlin's Kreuzberg neighborhood (March 2012 photo).