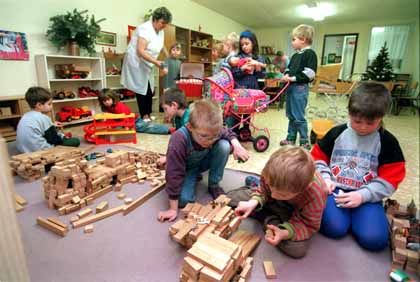 Is there a magic formula for fertility? German researchers would sure like to have it. German birhtrates are currently half what they were 40 years ago.

Six baby strollers are parked outside an upscale children's store. Inside, six chicly dressed mothers claw -- literally scratch -- at each other to get what they came for: a coveted pair of Winnie the Pooh rubber rain boots. They're the only boots their 2-year-olds will wear and the rainy season has just begun.

Welcome to Berlin's sceniest scene, the hottest neighborhood in town, Prenzlauer Berg -- Germany's answer to London's Notting Hill or New York's East Village. Here -- in shocking contrast to other parts of this graying country -- children and their doting parents are everywhere. In the past eight years, the number of under-three-year-olds has risen close to threefold in this former working class neighborhood of 134,000. Organic markets and toy stores abound. Playgrounds pop with life. Newspaper kiosks even sell diapers. One Indian restaurant has an indoor jungle gym as a gimmick to attract clients.

To top it off, the place oozes cool. Swanky bars and beatnik cafes brim with beautiful people in black. Upscale boutiques glisten in stores that used to be East German tenements. "I can't imagine living anywhere else in Germany," said Monika Pollack, a Frankfurt native and graphic designer whose son is almost three. "This neighborhood gives me all that I need. The biggest problem is that I spend too much time here. But I really have no reason to leave."

Germany's newspapers have hailed Prenzlauer Berg as the nation's "boomingist" baby center. Could it, they have also asked, also hold the answer to Germany's increasing fertility problem? If the magic of Prenzlauer Berg could be squeezed, bottled and marketed, not only could Germany become the world's hippest nation, but the country could also waylay its darkest fear: that there will soon be no young people to care and pay for its fast-aging population.

Where are all the babies? 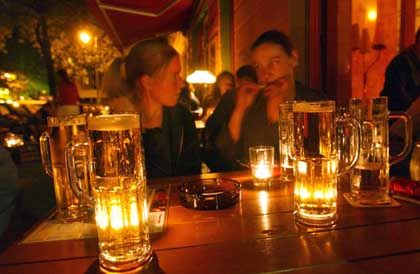 Why have babies when you can have fun? Many German couples are saying "no thanks" to kids. They'd rather mix drinks than milkshakes.

Konrad Adenauer -- Germany's post-World War II chancellor -- once famously quipped that the government didn't need to offer lavish benefits for families because "Germans will always have children." He was dead wrong. Currently, one-third of German women are childless. It's the highest rate of childlessness in the world. Were it not for the influx of foreigners and longer life spans, Germans -- like many Europeans -- would be a dying breed. Germany's current birth rate is half what it was 40 years ago. Worse, 44 percent of Germans interviewed recently by the prestigious Forsa and Allensbach institutes said they were happy without kids and planned to remain childless.

The numbers have left the nation aflutter over all these happy empty nests. For their part, demographic researchers have high tailed it to Prenzlauer Berg to uncover its secret. Their results, released last month, show that the vision of educated mommies toting high-tech baby gear while juggling successful careers and maintaining svelte figures is just what it seems -- too good to be true. Indeed, the number of babies in Prenzlauer Berg is on the rise -- there were 1,300 newborns in 2004, compared to 900 in 1993. (In 1990 -- a year before German reunification -- there were 2,100). Yet, per capita, Prenzlauer Berg is actually one of the city's and nation's least fertile districts. So why all those baby strollers?

"In Prenzlauer Berg, the one thing we noticed is that there are more women of childbearing age than in most parts of the city," said Steffen Kroehnert, a researcher at Berlin's Institute for Population and Development. Today's mommies settled in Prenzlauer Berg when they were 20-year-old party girls. At that time, the neighborhood -- crammed with crumbling, unrenovated buildings, grungy bars and underground clubs -- had a raw electricity to it. Now, the partyers are toting Baby Bjorns. "The thing is," Kroehnert said, "each woman is having one child, not two or more." Across the nation, women are having an average of 1.37 children. In Berlin, they are having 1.2. In Prenzlauer Berg, a mere 1.0. If the nation was to keep births equal to deaths, women would have to be popping out 2.1 babies apiece.

So where are Germans having babies? Does any region possess the so-called magic recipe for fertility? Sort of. But it's nowhere near as sexy as Prenzlauer Berg. The town is called Cloppenburg and it is in rural, tradition-bound northwest Germany. Many of the women in this sparsely populated region of 150,500 (which includes three cities and numerous hamlets) quit school, married early and don't have jobs. The region's agriculture-based economy is also straight out of the 19th century.

Babies aren't the only answer

Career or kid? For many many modern women, that is the question.

Why aren't more babies being born elsewhere? "Maybe people just don't want to have children anymore," said Karsten Hank, a demographic expert and sociologist at the University of Mannheim. "Maybe its not as natural as we think it is." Still, many feel guilty if they don't because it is "still socially expected that people want to have children, regardless of if they do or don't."

A well-known statistic that often gets bantied about in Germany is that 40-45 percent of women with university degrees are childless. "I'm pretty sure most of these women planned to have children, but then didn't," either because of their career or their advanced age when they started trying to get pregnant, Hank said. As a rule, university cities and urban centers have lower fertility rates than rural areas without higher education options. The closest Hank can come to a miracle formula for fertility is: don't get an education, marry early and live on a farm. Hardly a tempting life plan.

A lack of good childcare possibilities is another reason often cited for low birthrates and in recent months the German government has sworn to help families by offering more preschool and year-round school slots. Hank spent five years studying the subject and has this to say: "I thought childcare would be it. I thought it would be easy. But what I found is that it had absolutely no effect." Another fascinating fact about German fertility is that German women tend either to have no children or two or more, he said. "The crucial decision in Germany is if you have one child or none," he said. "Once you have one, you already have all the difficulties of trying to balance family and career. So you might as well have another."

Could society be to blame for many women's aversion to motherhood? Certainly many women are simply burned out or terrified by the responsibility and burden they think motherhood brings. Others aren't willing to give up their careers. "It's too much pressure for many women," Hank said. "It's too hard to be a good mother, a perfect wife, a good lover and hold down a successful job." In Germany -- where many believe mothers should care for their children until they are three -- there is a particularly nasty phrase often attached to mothers who work. They are labeled "Rabenmutters," or inattentive, unloving, "unnatural" mothers. "Maybe all of this pressure has pushed women to make a choice," said Hanks. Rather than being bad mothers, they are simply choosing not to be mothers at all.