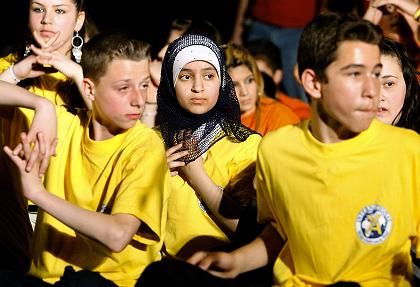 Berlin's Rütli School hit the headlines in the spring due to violence. In May, an American youth group visited to try and help.

It was a story that sent shock waves through schools across Germany last spring: Teachers at a school in Berlin wrote an open letter complaining of out-of-control violence among pupils. One teacher even said he dreamed of the day when one of the students would burn down the school so he wouldn't have to continue working there. Hardly incidental to the story and ensuing turmoil, almost 85 percent of the school's pupils came from an immigrant background.

The political uproar was deafening, with demands for increased school security segueing into ideas to punish immigrant families who refuse to learn German. And the realization grew that school integration problems were not limited to those neighborhoods in Berlin -- Neu Kölln where the Rütli School is located, and Kreuzberg -- that most often appear in the headlines.

Five months on, with Berlin children heading back to school this week, politicians have moved on from the rhetoric and have come up with concrete proposals -- including wider offerings of language instruction and mandatory pre-school -- to improve integration in Germany's schools. How quickly the new measures will make themselves felt remains an open question -- as does whether successful integration can be legislated at all.

"The symptoms that led to the riots in France," says Marcus Weinberg, a member of parliament with the conservative Christian Democrats and a former high school teacher in Hamburg, "are very similar to those that caused the Rütli School violence. The youth have a self consciousness of being losers, of having no perspective."

Unfortunately, statistics seem to show that they are right. Though many pupils from immigrant families do make it, there is an alarming gap between children with immigration backgrounds and those from German backgrounds. In Berlin, ethnic minority pupils are three times more likely to drop out of school than their German peers, according to a May report based on the most recent PISA study -- a study of education systems in 41 industrialized nations conducted by the Organization for Economic Cooperation and Development. German pupils are also much more likely to earn a diploma than their classmates with immigrant backgrounds.

Difficulties with the German language were, according to the study, a primary reason many children with Turkish immigrant backgrounds were slipping through the cracks. Every major political party now agrees that early language training, and language courses for parents, should be introduced. Mandatory enrollment in pre-school is another idea many are supporting.

But while the PISA report and the Rütli school incident have placed the focus squarely on Germany's schools, there have been other recent events that have shifted attention toward the country's immigrant population as a whole. Rioting among immigrants in city suburbs across France last autumn had many in Germany wondering if the same could happen here. The cartoon riots earlier this year also had some questioning where exactly Germany's largely Turkish immigrant population stood. The foiled terror plot in Britain earlier this month -- and Germany's own recent scare -- have just been the icing on the cake of jitters.

And the uncomfortable answer to all those questions seems to be that Germany -- even if its immigrant population has not so far shown a penchant for violence -- may not be any better at integration than other European countries.

"The youth are not the main problem," says Dr. Daniel Faas, a Cambridge-educated German sociologist who spent four years researching identity among those with Turkish backgrounds in Germany and England as compared with those having no immigrant background. "Its a combination of the national political context, social class, school policy, curriculum approaches, and, at times, the culturally insensitive language of teachers."

On occasion, for example, Faas observed teachers speaking German with a foreign accent to Turkish students while suddenly switching to accent-free German when speaking to an ethnic German student. He observed another teacher tell a student in the cafeteria, "Dont take that (beef) sauce, thats the Muslim sauce. It will make you impotent."

"These are ways in which teachers oppress and marginalize ethnic minority students," Faas says.

Indeed, politicians in Germany tend to agree that something needs to be done to promote better understanding between pupils with immigrant backgrounds and their teachers. Kenneth Frisse, the Social Democrat spokesman of Berlin's senator for education urges a reform of teacher training, complaining that at present it is too theoretical. The conservatives over at the CDU tend to agree that the German education system hasn't done enough to address the problem.

And Özcan Mutlu, a Turkish member of Berlin's Green Party -- which has long urged measures to improve integration in Germany -- says many ethnic minority students here have little respect for their teachers because they feel misunderstood by them.

"The authority is different from what they know at home," Mutlu says. "We need to work closer with the authority figures in the immigrant community. We have to work with imams, with Arab and Turkish organizations. We have to work together to tell the pupils, 'hey something has to change here. You guys are important, your future is important.' Then theyll believe in it too."

But even the education system here seems to be working against pupils with non-German backgrounds. The most recent PISA study claimed that the German educational system is culturally biased and actually discriminates against pupils with non-German backgrounds. Indeed, there are comparatively few children with immigrant backgrounds in Germany's university-track high schools, called Gymnasiums. Some vocational-track schools, on the other hand, have become catch-alls for immigrant children.

Indeed, some have broached the idea of a far-reaching education reform as a way of not only solving problems faced by immigrants, but also similar problems faced by ethnic German pupils from low-income families.

Still, it will likely take much more than a few new laws to combat Germany's long tradition of cultural insensitivity: Some German politicians have called for punishing immigrants who "refuse to integrate" or for tests asking Muslim immigrants what they think about homosexuality. For their part, many Turkish families do little to interact with their ethnic German neighbors and some even prevent their children from taking part in school field trips.

"We have lots of role models, lots of testimonials, but they're invisible," say politician Mutlu about the Turkish-German population. "They're invisible in the media and in the society. Why don't we have, for example  a Turkish news anchor?"

Faas says that such insensitivities are felt especially strongly in schools. The behavior of schoolchildren with immigrant backgrounds, in other words, is symptomatic of how well Germany is integrating its immigrant population. Last year's violence shows there's still work to be done.

"When theyre fighting," Faas says students told him "theyre having territorial power struggles. It's a reverse hierarchy. It's their chance to be the majority."