In Berlin, the former seat of Nazi Germany, a scandal is currently brewing that has nothing to do with modern Germany and everything to do with the nation's Nazi past. The brouhaha is over how May 8, 1945, the day Nazi Germany capitulated, should be remembered. Local officials of a wealthy Berlin district just passed a motion stating that victims of Nazi oppression are not the only ones who should be memorialized and honored. Regular German soldiers and civilians who were killed as well as women who were raped by the advancing Soviet army, too, should be remembered, they declared.

The resolution has provoked harsh criticism, especially after one lawyer and local politician said that in some matters, he can't help but agree with one of the nation's neo-Nazi parties. Critics charge that lumping all victims together, and going so far as to turn war criminals into victims, dangerously blurs the question of guilt and responsibility for the war.

The message of the debate is clear: For us Germans, whether we like it or not, the past is always present. One only has to take a look at a German bookshop these days. The shelves are overflowing with new publications on every imaginable aspect of the Nazi period. Newspapers and TV channels are running dozens of documentaries on World War II. The conflict cost about 60 million lives and obviously it still haunts us. 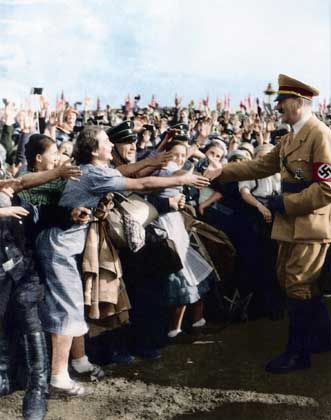 Hitler met with great fanfare by an enthralled German public in 1935.

Probably the most important reason for this ongoing presence of the Nazi past is quite personal. The former Wehrmacht soldiers who fought in the war are now almost all in their eighties. Still, almost every single German family harbors a complicated personal war history, some more bitter than others.

Part of mine, for instance, is that my Austrian grandfather committed suicide in the spring of 1945. He had been a simple tailor, churning out Nazi uniforms, but never putting one on himself or fighting. Still, he had been a Nazi party member and feared revenge from the advancing Soviet troops.

As a teenager in the late 1960s, I stumbled upon a box of family photos containing a portrait of a handsome, dark-haired young man in a black jacket with skulls on the collar, the uniform of Hitler's elite SS division. My grandmother revealed to me that the man in the photo was Willy, her beloved little brother. Willy joined the illegal Austrian branch of the Nazi party in the 1930s, and was then imprisoned. He escaped and went to Germany, where he joined the SS.

He served at the Dachau concentration camp and my grandmother remembered how he returned home for a holiday saying he had seen terrible things which he could not talk about but which made him despise National Socialism. Willy then volunteered for the eastern front and was shot in 1941, during the first week of the Russian campaign. 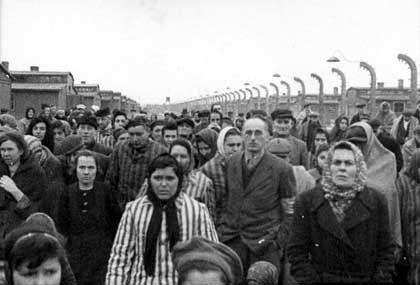 My father, recruited late in the war because of his young age, served as an anti-aircraft gunner in southwest Germany and was lucky not to have been on duty on the day in early 1945 when Allied bombers attacked the dam his unit was protecting. Several of his fellow soldiers died. He was 16 years old at the time.

My wife's parents tell a harrowing tale of fleeing from advancing Soviet troops in 1945. They were only children, but leaving behind their homes and everything they knew was a traumatic experience that deeply influenced their personalities and lives. Of course, we got away lightly compared to the fate of Jewish-German families, but still, the war lingers in almost every German home.

What did you do during the war, Grandpa?

Nevertheless, the way the war and the Nazi years are talked about in Germany has changed radically in the past 60 years. Right after the war, there was a deafening silence. "Don't mention the war," was the basic mantra, which the British comedian John Cleese brilliantly satirized in the 1970s classic BBC TV comedy "Fawlty Towers".

In West Germany, the vast majority of Nazi judges, scientists and bureaucrats simply stayed in office. When Chancellor Konrad Adenauer was asked in early 1955 if there should be an official event marking the 10th anniversary of the liberation from the Nazis he answered, tellingly: "You don't celebrate your defeats."

Only in the 1960s, did rebellious teenagers like me start to question their parents and grandparents: What were you doing between 1933 and 1945? What did you know about the killing of the Jews? We did not accept the collective amnesia regarding the Nazi crimes. We also refused to buy the popular legend of an evil demon called Hitler who single-handedly seduced and betrayed an innocent German people who knew nothing about the atrocities the Wehrmacht and the SS committed.

In the 1970s, young teachers introduced the Nazi period into the school curriculum and historians began more intensely documenting and researching the rise of the Nazis. The American TV series "Holocaust" also had a strong impact. Then, on May 8, 1985, President Richard von Weizsaecker -- once a Wehrmacht officer -- gave a historical speech to the German parliament in which he declared the day the "Deutsche Reich" submitted to an unconditional capitulation a "Tag der Befreiung," a "day of liberation" for Germans.

This was especially resonant considering Weizsaecker's own family war story. His father Ernst served as Nazi deputy foreign secretary and in 1942 signed deportation orders that sent about 6,000 French Jews to extermination camps. In his speech, Weizsaecker Jr. remembered Jews, but also other groups, like Gypsies, homosexuals, communists and the handicapped, who were persecuted and killed because they were different or had dissenting political opinions.

Nazi war criminals tried after the war in Nuremberg.

By the 1980s, recognition of Nazi crimes and the acceptance of the German duty to critically remember them had finally attained broad consensus. Now it is commonplace. Just the other day, Wladimir Kaminer, a Jew from Moscow who came to Berlin 15 years ago and who is now a German citizen and very successful writer, told me. "Your defeat in World War II has helped you build up a true democracy. The Germans are hopeless now when it comes to anything militaristic and totalitarian. The Russians, on the other hand, still can't even recognize the victims of Stalinism. That's because even though he was a dictator, he won the war against evil Nazi-Germany and you don't accuse a winner. That's why you have a lot more racists and right-wing extremists in Russia than in Germany."

Respected British historian Ian Kershaw -- who wrote what I believe is the best Hitler biography -- recently praised the Germans for having done much more to come to terms with their fascist past than the Austrians, Italians or Japanese.

This is encouraging to hear, though it does not offer an excuse to indulge in complacency. In the last few years, books on the Allied bombing campaign and the brutal expulsion of Germans from Poland and Czechoslovakia in 1945 have focused on how Germans suffered during the war. Leftists have warned that this shift could lead to a moral levelling and suppression of the fact that it was Nazi Germany which, after all, began the war and that their goal was to enslave Europe and ultimately achieve world supremacy. 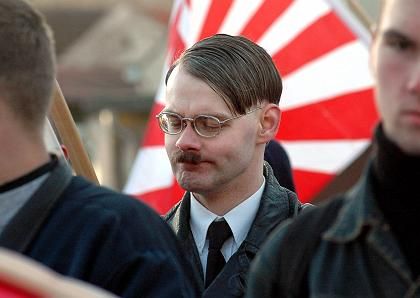 Neo-Nazis are becoming more brazen and visible in Germany. Many unabashedly honor Hitler as a great German statesman.

And unfortunately, on the fringes of German society -- particularly in the impoverished former East Germany -- anti-Semitism and neo-Nazism still exist and at the moment seem to be thriving. Last year, neo-Nazi parties won parliamentary seats in two German states and party heads have unabashedly declared their desire to win federal representation in 2006 elections. It is hard to understand how such self-declared nationalists can actually defend Hitler -- a fanatic who transformed Germany into an immoral police state and ultimately brought the nation to its knees and forced it to bear decades of occupation. Still, they do and this shows that even now, the debate on the Nazi period is not always terribly rational.

And calm rationality is what is desperately needed on all sides when it comes to confronting Germany's Nazi past. Unfortunately, such even-temperedness is often sorely lacking. Whenever a right-wing extremist provokes controversy -- like last month, when a prominent Neo-Nazi called the Allied attacks on Dresden in February 1945 a "Holocaust of bombs" -- German politicians immediately start to moralize in grand style instead of discussing and analyzing the historical facts.

The truth is that after the Dresden air attacks, even British Prime Minister Winston Churchill looked at the rubble and ordered a review of what he called the "bombing of German cities simply for the sake of increasing terror, though under other pretexts". There are other good arguments to support the conclusion that the relentless bombing of German cities did, indeed, conflict with international law and therefore can be judged a war crime. Of course, one must not leave out the bombing attacks perpetrated by the German Luftwaffe against Guernica, Warsaw, Rotterdam or Belgrade, which were also war crimes.

But out of fear they might nurture nationalistic ideas or be misunderstood and criticized by the foreign media, German politicians continue to evade a detailed discussion of the historical facts. Instead, they prefer to loudly lament the popularity of neo-Nazis who dare to insult Holocaust victims. Again, emotionalism and moralizing beat out rationalism.

The past is present 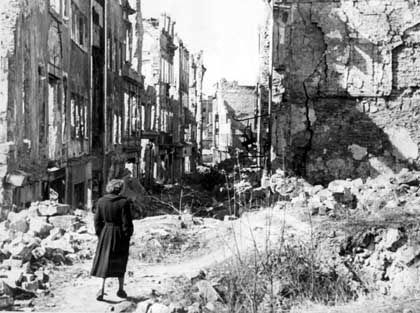 Allied bombers left Dresden in ruins in 1945. Historians still debate if the attacks can be justified militarily. Even Winston Churchill questioned them.

As a boy I loved to play in bombed out villas in Berlin and even today when I look out of my kitchen window I can still see a house with a bombed-out back wing where tiles from blasted-out bathrooms still stick on the wall. This house is certainly an anomaly, as most of Berlin has been rebuilt. But it will take many more years until all traces of the past completely disappear.

Meanwhile, my 11-year-old son has started to ask me about the Nazis. While we were living in London, his schoolmates sometimes greeted him mockingly with a "Heil Hitler." Although he was born almost 50 years after the "Fuehrer" shot himself in his bunker, he, too, can't escape history. That is not something I regret.

The author recently published a photo book called "Bilder des Zweiten Weltkriegs" (Images of World War II). It contains rare and never-before-published color photos from World War II. The book has not been translated into Englih, but the photos offer a chance to see how the camera became a weapon and de facto historian of World War II.