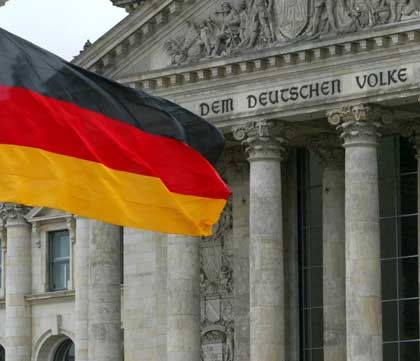 You'll see it in front of the Reichstag. But everywhere else, the German flag is an endangered species.

It's almost as though Berlin was following a capital city checklist when the city was revived as Germany's political hub in the late 1990s. Dramatic government quarter complete with flashy architecture? Check. Headquarters of major think tanks and foundations? Check. National monuments? Check. Lots of flags? Ummmm. Wait a sec. Flags? Somebody forgot the flags.

Berlin is an odd world capital: Whereas cities like Washington, London and Lisbon relish in a little flag-flying patriotism, Berlin shies away from the black, red and gold tricolor. Sure you'll find it on the four corners of the parliament building. But elsewhere? Forget about it. Almost no German corporation flies a flag outside its headquarters, like British banks in The City do. And flags in front lawns Long Island style? No way.

Across the rest of Germany, it's the same story. National pride, especially when it comes to publicly displaying a love, or even a mild affinity, for Germany is still simply taboo. When Horst Köhler left a plum job as head of the International Monetary Fund to become Germany's president -- mostly a ceremonial position -- in 2004, he said in his speech, "I love Germany." Reuters reported at the time that the sentence "sent a hush through the packed Reichstag chamber."

Which goes a long way toward explaining the dearth of the black-red-gold. Sixty-plus years after the end of World War II, German patriotism just ain't in the cards. Even the memorials the country builds these days are more anti-monuments. The Memorial to the Murdered Jews of Europe is just the most recent example.

Things are changing, of course. Germany's participation in the Balkan military operation in the 1990s and in Afghanistan starting in 2002 were major steps forward. German military power, the country learned, can be associated with things other than mass murder. But asking a German whether he loves his country will generally elicit a quick "no" or an uncomfortable silence. Köhler's "I love Germany," was almost visionary.

But the flag thing is weird. After all, there's nothing to be ashamed about. Black, red and gold were traditional colors long before Hitler arrived -- indeed he ditched the tricolor in favor of the swastika. The colors date back to those used by emperors during the Middle Ages and were again used by army volunteers resisting the Napoleon invasion in the early 1800s. During the 1848 revolutions across Germany, leaders officially adopted the tricolor as the movement's flag.

Still, though, the thing is a symbol for Germany and Germany is a problematic country for Germans to get worked up about. Which is perhaps why the country is so passionate about the World Cup. It's the one opportunity the country gets to go nuts for the homeboys.