You know something seismic has happened when England fans who came to Germany with inflatable Spitfires singing " 10 German Bombers" suddenly start supporting the German national team. 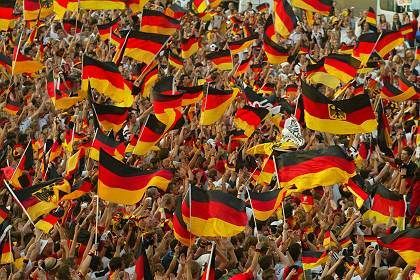 German fans ecstatic as their team, "World Champions of our hearts" comes third.

British Prime Minister Tony Blair pointed out this unprecedented phenomenon in an opinion piece for Sunday's Bild am Sonntag newspaper, and declared: "The old clichés have been replaced by a new, positive and more fair image of Germany."

The 2006 World Cup host appears to have pulled off a coup no one had thought possible before the tournament began: a fundamental rebranding of Germany, a shift in the world's view of the nation from dour and humorless to fun-loving and friendly.

The perfect summer weather had a lot to do with it, as did the surprisingly strong performance by Jürgen Klinsmann's team. Those two factors acted like a strong dose of Prozac for a nation diagnosed in 2004 by its own president as entering "collective depression."

Feelings of patriotism stifled for decades by the Holocaust came to the fore as Germans started attaching not just one but two and sometimes four national flags to their cars, painted neat little flags onto their faces and cleavages and donned wigs and bras in the national colors of black, red and gold.

They started singing the national anthem with passion in the stadiums and in the " Fan Fests" or public viewing areas, a successful World Cup innovation which gave the millions of people who couldn't get match tickets a collective experience of watching football.

It turned into a gigantic three-colored fancy dress party, a summer version of the Rhineland's spring carnival which gained momentum with each of the team's victories.

German media called it "partyotism" and indeed there was nothing threatening or exclusive about it. Men and women of all ages caught the bug, and there was none of the raucous, tribal passion of England's fervent fans.

The atmosphere engulfed the over 1 million visitors from abroad. In Cologne, on the steps leading up to the cathedral, Brazilian fans hopped and danced with Mexicans. Next to them were England supporters trying to chat up Swedish blondes, or engaging in mostly good-humored chanting competitions with Germans. 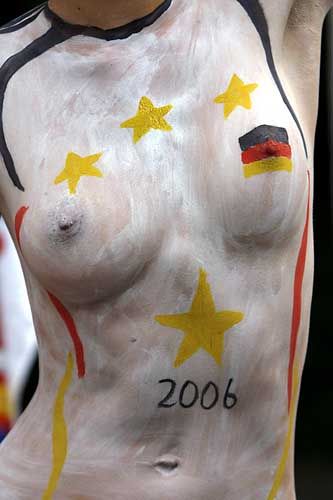 "Thirty one days of the World Cup have changed Germany and the Germans more than politicians have managed in years with their laws and decrees," wrote Germany's best-selling Bild newspaper on Monday.

United Nations Secretary General Kofi Annan, in Berlin for Sunday's final, told German television: "I have to say that from everything I saw and heard, it was one of the best World Cups ever. The friendly spirit really caught on here."

But let's face it, did anybody seriously expect this World Cup not to be a success? How could it fail given Germany's capacity for organization, its punctual trains, dense autobahn network, modern stadiums, great beer and spotless hotels? If the party atmosphere wiped away some of the negative cliches, the tournament did reinforce some of the positive ones, too.

Everything was planned down to the smallest detail. Last Saturday night on the Kurfürstendamm, western Berlin's main boulevard, as thousands of fans celebrated Germany's victory over Portugal, rubbish disposal men stood around patiently waiting to polish the streets once everyone had gone home.

When one exuberant fan lit a flare in the street, firemen who had been lurking in the shadows jogged onto the scene, put it out, tut-tutted mildly and walked away. Police had trained for months how to handle disorderly fans. They adopted a non-intrusive, tolerant approach and their cooperation with foreign police worked.

When the crowds on Berlin's Fan Fest behind the Brandenburg Gate started getting too big, authorities rapidly arranged for the public viewing area to be increased and more giant screens were deployed within days.

It seems the only people who had any concerns ahead of the World Cup were the hosts themselves. In fact, capital-A "Angst" dominated the run-up to the tournament. Not just the normal jitters any organizer would have, but deep, ponderous Angst, the German kind.

It started in January, when a consumer watchdog declared that several of the 12 World Cup stadiums, newly built or painstakingly refurbished, were unsafe for fans due to an absence of proper escape routes.

Then reports of attacks on foreigners mounted in March, April and May, not because more were being perpetrated but because the media were picking up on them, stoking a debate about " No Go Areas" for visitors in parts of Berlin and eastern Germany. Meanwhile newspaper coverage of violence by immigrant schoolchildren in schools added to concern that Germany was unable to properly integrate its many immigrants of Turkish descent.

What happened? The Turks, whose own team hadn't qualified for the tournament, adopted the German side, and startled many here by waving German flags. After each victory, many of the honking, flag-draped cars racing round Berlin were driven by cheering Turks.

There was concern in Germany and abroad about a surge in forced prostitution as new brothels opened to cope with the influx of fans. In the end, demand fell far short of expectations, with fans apparently too busy partying and meeting Fräuleins at the Fan Fests to think about paying for sex.

Then police and politicians were worried that neo-Nazis might stage demonstrations to get some of the global attention focused on Germany. Or that Iran's President Mahmoud Ahmadinejad, a fervent Holocaust denier, might present Germany with a major diplomatic headache by coming to watch Iran play.

Neither happened. The Nazis appeared to be too busy watching football or worried about counter-demonstrations. And the Iranian team didn't do well enough to warrant a presidential visit.

"World Champions of our Hearts"

Finally, the team. Many hadn't expected it to get beyond the first round. But fans across the country declared it "World Champions of our Hearts" after it got as far as the semi-final with a lively, attacking brand of football.

They even dispatched Argentina on the way in a penalty shootout -- there's another cliche that survived the tournament.

Nothing went wrong, except for the football itself. Few of the matches were memorable, the goal average was below par, and the teams were too cautious.

No fresh young talent burst onto the stage, there were no David vs. Goliath upsets and the only fairy tale of the tournament -- French soccer legend Zinedine Zidane's return to sparkling form to lead his team to the final -- came to a disastrous ending when he was sent off in the final for headbutting an Italian player.

That, along with England star David Beckham vomiting on the pitch, is likely to be the most striking image of a World Cup that from a sporting point of view fell short of previous tournaments. Still, Germany can't be blamed for the quality of play.

Even Chancellor Angela Merkel, not known for charisma or outbursts of emotion, was swept up in the football frenzy, cheering, punching the air during matches and hugging coach Klinsmann and the World Cup's chief organiser, Franz Beckenbauer.

Merkel said she hoped the last four weeks had given the country the confidence and drive to tackle its problems -- mass unemployment and runaway welfare costs.