After months of heated discussions about the future of Germany's nuclear power plants, the coalition government has agreed to extend their operating lives by up to 14 years.

Environment Minister Norbert Röttgen and Economics Minister Rainer Brüderle announced the compromise late on Sunday evening after a nearly 12-hour meeting at the Chancellery in Berlin.

The agreement, which still needs to be approved by the German parliament, the Bundestag, will make significant changes to a law pushed through by Merkel's predecessor, Chancellor Gerhard Schröder, which mandated that Germany phase out nuclear power by 2021. It will form the cornerstone of a broader energy strategy that Merkel is set to reveal later this month and ends months of divisions in the coalition government over the issue of extending plant lives.

Under the new two-tier solution, the government plans to divide Germany's 17 nuclear plants into two groups, depending on their year of construction. The operating lives of older nuclear plants will be extended by eight years, while newer plants will receive an extension of 14 years. The new plan means that Germany will be using electricity generated from nuclear power for the next three decades.

In return, Germany's nuclear reactor operators -- RWE, E.on, Vattenfall and EnBW -- will support renewable energy to the tune of €15 billion ($19.3 billion). Environment Minister Röttgen said nuclear power plant operators will pay €9 per megawatt hour of nuclear power to promote renewable energies. From 2011 to 2016, energy companies will pay contributions of between €200 million and €300 million per year. From 2017, when a separate nuclear fuel-rod tax expires, the contributions will total billions of dollars annually. Economics Minister Brüderle talked of a total of €15 billion in contributions, and said the new deal had been reached in consultation with industry.

The contributions come in addition to the fuel-rod tax which was agreed upon as part of the government's austerity package and which is expected to raise €2.3 billion per year.

It remains to be seen how the power companies will react to the new government guidelines. Energy companies have already put up stiff resistance to the nuclear fuel-rod tax. Participants in Sunday's meeting also agreed on some of the specifics of that tax. Sources told the news agency Reuters that the fuel-rod tax would run for six years and be fixed at €145 per gram of nuclear fuel.

Röttgen said the coalition has created an energy policy strategy for the coming decades, describing it as a "great success" for the use of renewable energy. "The roadmap into the era of renewable energy has been established," he said.

The new strategy would spur on the transformation of energy production, something that was not only important for climate protection but also for Germany's technological leadership, Brüderle said. "The hard work has paid off," he said. "We have achieved a great success."

The new compromise has already been criticized by the opposition and opponents of nuclear energy. Sigmar Gabriel, leader of the center-left Social Democrats, described the agreement as a "black day for energy policy." He said the coalition government, which consists of the conservative Christian Democrats and the business-friendly Free Democrats, had given in to pressure from the big energy companies. As long as old, highly profitable nuclear power plants are still online, they will hinder the development of renewable energy, Gabriel said.

Gabriel also reiterated the SPD's plan to take court action to determine whether the Bundesrat, Germany's upper legislative chamber, needs to approve the extension of nuclear plant lifespans. Merkel hopes that the new plan, because it falls short of overturning the phase-out law, will not require approval from the Bundesrat. Merkel's government wants to avoid taking the issue to the Bundesrat, as the governing parties no longer have a majority there. The SPD and Greens have said they would oppose the government's plans in the Bundesrat, while several states have threatened to take the issue to Germany's Federal Constitutional Court to stop the government's plans.

"The energy lobby has prevailed," commented Gesine Lötzsch, co-leader of the far-left Left Party. "The government under Merkel has shown itself to be open to blackmail."

"Now the cat is out of the bag -- the government has shown how backward it is in energy issues," commented Björn Klusmann, head of the German Renewable Energy Federation, in remarks to the newspaper Frankfurter Rundschau. If the nuclear power plants remain online for up to 14 years, it will be an obstacle to the expansion of renewable energy, he said. "The fact that the energy companies are paying money (toward renewable energy) does not change anything."

Around 1,000 anti-nuclear activists staged a protest outside the Chancellery while Sunday's meeting was underway. Opinion polls suggest a majority of Germans want nuclear power to be phased out. 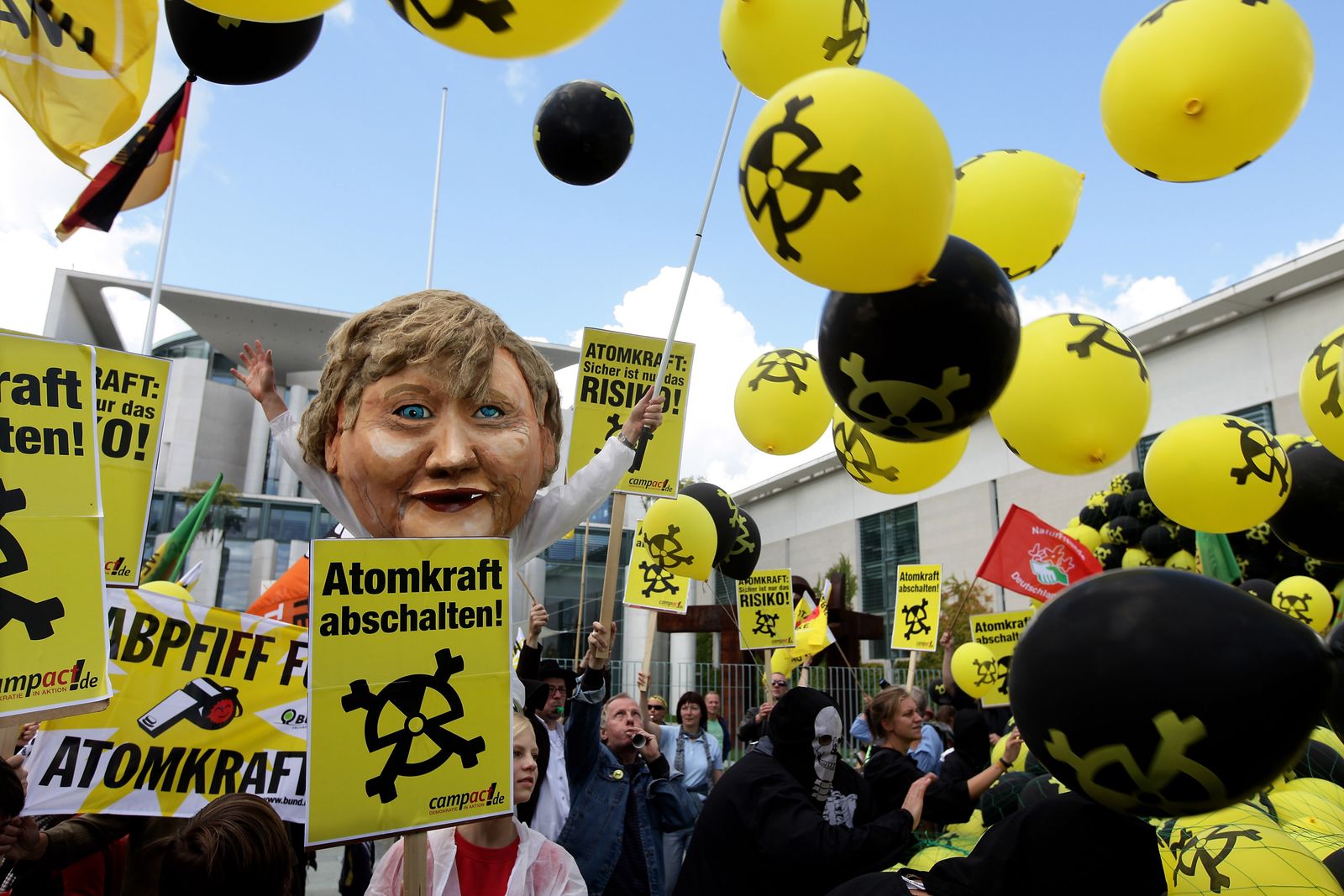 Anti-nuclear protesters demonstrate in front of the Chancellery in Berlin against the government's decision to postpone the lifespan of the country's atomic power plants.