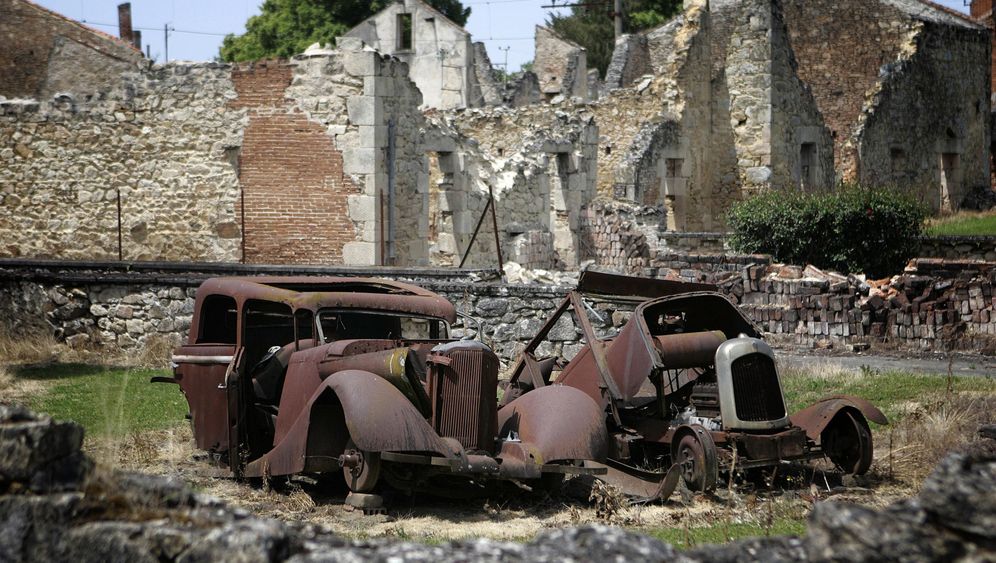 It was one of the worst war crimes committed by the Germans in France during the Second World War. Some 67 years after a brutal massacre by SS troops in the French town of Oradour-sur-Glane, German officials have raided the homes of six elderly men suspected of taking part.

On June 10, 1944, just four days after the D-Day landings in Normandy, German troops killed 642 people, mainly women and children, in the central French village. That afternoon, the 3rd Company of the 1st Battalion of the "Der Führer" Regiment of the SS "Das Reich" Division rounded up some 450 women and children, forced them into a church and then burnt it to the ground. The remaining men in the village were shot to death in barns and garages.

None of the villagers were meant to survive, but a handful managed to escape. The town itself, largely destroyed that day, was never rebuilt. The burnt-out ruins were left standing as a ghostly memorial to the victims.

One of the two remaining survivors said he welcomed the efforts by officials to prosecute the war crimes. He was "pleasantly surprised" that Germany was still searching for those responsible, 86-year old Robert Hébras told news agency AFP on Monday. If the men in question are suspected of committing war crimes in Oradour-sur-Glane or anywhere else, they must be tried in court, Hébras added.

The suspects, all between 85 and 86 years old, are known to have been members of the unit in question, and have received unannounced visits from law enforcement officials over the last two months, the state prosecutor's office in Dortmund announced Monday. Facing possible charges of murder or accessory to murder, their homes were searched for wartime diaries, photographs and documents that could provide new evidence against them.

At the time of the massacre, the men would have been 18 or 19, and low-ranking, the head of the central Nazi war crimes investigation unit in Dortmund, Andreas Brendel, told news agency AP.

"Some of the suspects have denied taking part in the murders, others were no longer fit for interrogation," he told daily Bild in a seperate interview. Health officials must now determine whether the men are capable of handling questioning by officials.

This, combined with the failure to find much evidence during the searches, could mean limited success for prosecution of the unidentified suspects, though. Officials are still trying to determine what role the men played on the day of the massacre, Brendel said.

"We know that all the members of the 3rd Company were in Oradour," he told AP. "Naturally they had different functions -- some of them secured the area, for example. Our problem at the moment is finding out how much they knew and what they might have done to facilitate the crime."

Clues to the suspects' identities were discovered in documents formerly held by the East German secret police, the Stasi. These files held information previously unknown to investigators in West Germany before reunification.

Some members of the SS unit involved in the massacre were put on trial in France in 1953, while others faced court proceedings in former East Germany in 1983. But still other suspects living inside communist East Germany were never pursued due to what archive expert Henry Leide told daily Bild were "political reasons." According to the paper, Stasi officials used such information to blackmail war criminals into serving their interests.

The reason for the 1944 massacre remain in dispute. Some have claimed that it was ordered by battalion commander Sturmbannführer Adolf Diekmann in retaliation for the kidnapping of a German soldier by French Resistance members linked to Oradour, Brendel told AP. But little more is known because Diekmann, whose rank was equivalent to that of a major, was killed in action soon after.

The latest investigation was opened based on the precedent set by the John Demjanjuk case, which concluded earlier this May, Brendel told AP. The 91-year-old former guard at the Sobibor death camp in occupied Poland was sentenced to five years in prison for abetting the killing of 28,060 people. He was freed on account of his age and is now living in a nursing home in Germany.

It was the first conviction in Germany of a suspect who was merely a guard, with no direct evidence of targeted murder.