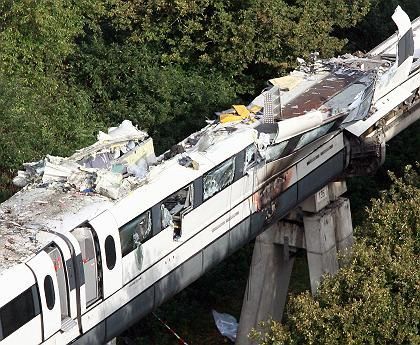 The Transrapid hurtled into a maintenance vehicle on the test track in September 2006.

Two men went on trial in Germany on Tuesday for their role in the magnetic levitation train crash that killed 23 people and injured 11 in 2006.

The two men were in charge of the test track for the so-called "Transrapid" monorail train. The train crashed into a maintenance vehicle at 170 kilometers per hour (106 mph) near Lathen in the Emsland region of northern Germany on September 22, 2006.

The men, aged 50 and 67, face charges of causing death and injury through negligence. They are accused of failing to implement the necessary safety precautions before the high-speed train travelled along the monorail track.

If found guilty, they face up to five years in jail. But state prosecutor Hubert Felskamp, speaking ahead of the trial, said the sentence was likely to be more lenient than that. "The defendants were honourable people who always paid attention to safety," he said.

The Transrapid, developed by German firms Siemens and ThyssenKrupp, can travel at three times the speed of normal steel-wheel trains. It floats on a magnetic cushion one centimeter above the track. It has no fuel source on board and its makers have said that it cannot derail.

A number of tourists were on board the Transrapid when the accident happened. Twenty-three of the victims were visitors to the 22-year-old facility, which regularly offers rides.

As the Transrapid train began to accelerate, the passengers must have been able to see the stationary maintenance vehicle coming ever closer through the panoramic front windows. It was the first-ever crash on the track in the Emsland district near the Dutch border.

The crash was so forceful that pieces of wreckage were strewn 300 yards on either side of the track.

German engineers have been testing the sleek white train since the late 1960s.

Attempts to build a commercial maglev line in Germany have repeatedly been blocked by environmentalists and other opponents, leaving projects on drawing boards.

Despite numerous proposals for its use across the world, the only train of its kind in commercial use is as a shuttle from the centre of the Chinese city of Shanghai to its airport. The city of Munich in March scrapped a plan to build a Transrapid link from the city center to the airport due to the high cost of the project.