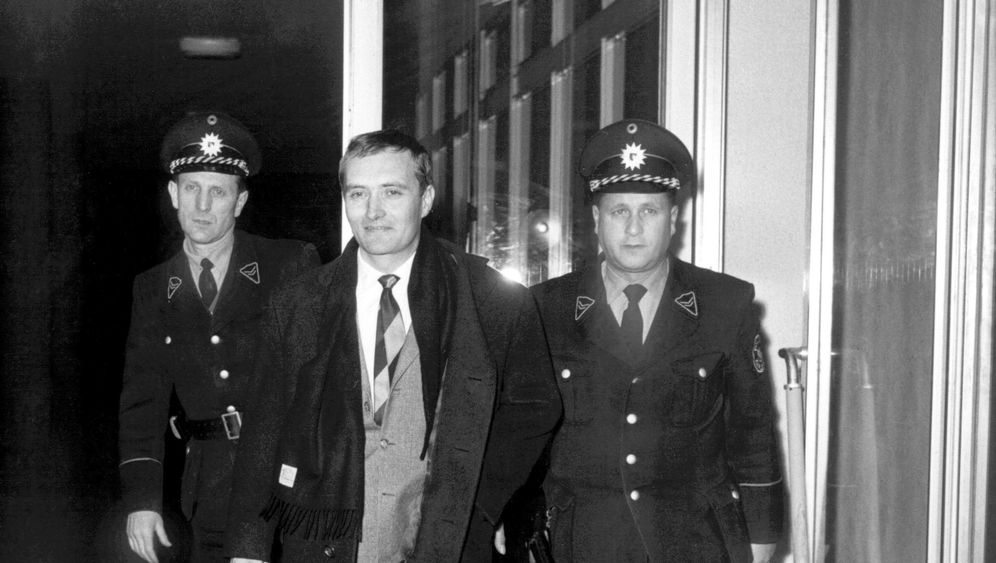 They were given names like Dragonfly, Fly and Wasp. Five teams with codenames like "Pentathlon" and "Einstein" were on their trail in a secret operation by Germany's Military Counterintelligence Service (MAD), one of the country's three federal intelligence agencies, that was dubbed "Sabotage." The hunt had begun.

The affair that happened in West Germany in October 1962 sounds like a spy thriller from the pen of John le Carré, who at the time was working on his bestseller "The Spy Who Came in from the Cold." But at the time, the height of the Cold War, German intelligence really believed they were on the trail of a large-scale conspiracy. They thought that SPIEGEL founder Rudolf Augstein (codenamed "Dragonfly"), as well as SPIEGEL reporters including Conrad Ahlers ("Fly") and Hans Schmelz ("Wasp") had betrayed West German military secrets.

The resulting SPIEGEL affair, as it was later dubbed, would cost the defense minister his job, make the magazine famous around the world and mark a watershed moment in the history of West German postwar democracy.

But the meticulously planned MAD operation began with a gaffe. At 6:15 p.m. on Friday, Oct. 26, an elderly gentleman rushed from a Düsseldorf department store to his Mercedes in the pouring rain, carrying a duck for his Sunday roast under his arm. Suddenly he was stopped by officers from the Federal Criminal Police Office.

The police were sure they had caught Augstein. After all, the Mercedes was parked in front of SPIEGEL's Düsseldorf office and had Hamburg plates. It all fit together: Augstein lived in Hamburg, where SPIEGEL has its headquarters, and he also had a second residence in Düsseldorf.

But the suspect vehemently denied that he was Augstein. He kept insisting that his name was Erich Fischer, and that he was an advertising salesman for SPIEGEL. He could not prove anything, however, because he did not have his identity papers on him.

"You can make things easier for yourself and for us in this lousy weather," said one of the investigators impatiently. "Just admit that you are not Fischer!" Fischer reacted with black humor. "If I make a confession, do I get less time?"

It took almost two hours before the error was cleared up, even though the burly Fischer did not physically resemble Augstein, who was thin and 15 years younger.

An Attack on Press Freedom

Thus the biggest political scandal in Germany's postwar history began with an embarrassing mistake that set off a chain of further gaffes. For example, investigators searched the beds of SPIEGEL editor in chief Claus Jacobi' children, seizing their drawings as evidence. On other occasion, police chased a car all the way across Hamburg until the vehicle finally stopped in an area of community gardens. The man who emerged from the car was not the alleged traitor Augstein, but a harmless construction foreman.

The affair often resembled the Keystone Cops more than a le Carré novel. But the scale of the accusations, the high-handed actions of the authorities and the lies and half-truths of some of the parties involved meant that SPIEGEL's staff and many Germans didn't think it was funny.

Never in the history of postwar West Germany had the state acted against journalists in such an unscrupulous way. And never before had the population's displeasure made itself felt with such force on West German streets. An unlikely alliance of conservatives and leftists, students and academics publicly protested against the attack on press freedom. The media affair became a government scandal. It caused the government of Chancellor Konrad Adenauer to collapse and led to the resignation of the most powerful man in the Cabinet, Defense Minister Franz Josef Strauss.

The whole thing was triggered by a somewhat dry and detail-heavy SPIEGEL cover story published in the Oct. 8, 1962 issue. The authors Conrad Ahlers and Hans Schmelz analyzed the state of the German armed forces, the Bundeswehr, over the course of 17 pages. They came to an alarming conclusion, quoting the assessment of NATO high command that German forces were only "partially ready" to defend the country. There was a lack of weapons, troops and, in particular, the right strategy. The NATO exercise "Fallex 62," which had been held a short time before, had shown that the West German lines would quickly collapse in the event of an attack by the communist East.

Nevertheless, even some SPIEGEL editors considered the article to be long-winded and not particularly controversial. Similar material had been reported in another SPIEGEL story and in an article by a German Sunday newspaper, without any apparent consequences. This time, too, the reaction was subdued at first. There was no public debate and no denials were issued. But in the background, the magazine's opponents were getting ready to act.

One of them was Friedrich August von der Heydte, a right-wing professor of international law in the city of Würzburg who was also a member of a reactionary clerical association whose aim was to "rescue" the Christian West. Now he apparently saw his mission as protecting the West from SPIEGEL. On Oct. 11, he filed a criminal complaint against the magazine with the federal prosecutor's office, accusing the publication of treason.

But the federal prosecutor's office had already gotten involved of its own accord a few days previously. It had indirectly commissioned a legal expert called Heinrich Wunder to assess whether state secrets had been published. But Wunder worked in the criminal law department of the Defense Ministry, which was headed by Strauss -- in other words, the very ministry that had been publicly embarrassed because of the article. Could Wunder really provide an objective opinion?

In addition, Wunder, who had only taken office a short time before, had never produced a military expert opinion before. Despite that, he managed to come up with results very quickly. Around a week after the SPIEGEL article appeared, he claimed to have identified 41 state secrets that had been betrayed. Those supposed secrets even included the name of an actor who had done nothing except play the role of the Defense Minister during the Fallex exercise.

Wunder was able to place the bar for secrets so low because the legal definition of a state secret was vague. Simply collating information that was already public could be construed as treason. The expert also had a boss who was exerting massive pressure behind the scenes. After reading the article, Strauss railed angrily against the "journalistic terrorism" committed by SPIEGEL -- and recognized the humiliation as an opportunity.

Now, he had a chance to permanently silence the magazine, which had repeatedly caused him serious problems in the past. Strauss's deputy Volkmar Hopf visited the office of the federal prosecutor in Karlsruhe on Oct. 20, together with Wunder, the legal expert. There, Hopf tried to convince the prosecutors to act by lying to them. He said that the Americans were "extremely upset" by the SPIEGEL report and had even threatened to exclude West Germany from NATO secrets in the future.

The approach worked. The relevant federal prosecutors were persuaded, and on Oct. 23 an investigating judge at the Federal Court of Justice issued arrest and search warrants. Potential opponents of the operation were sidelined by the Defense Ministry, especially Justice Minister Wolfgang Stammberger, but also the Bundesnachrichtendienst (BND) and the Office for the Protection of the Constitution, Germany's foreign and domestic intelligence services. Hopf and the federal prosecutors only trusted their own people with the case, namely the Federal Criminal Police Office (BKA) and the military intelligence service MAD.

Following the embarrassing mix-up in Düsseldorf on Oct. 26, the operation came under time pressure. Investigators feared that Fischer, the "wrong" Augstein, would warn the real Augstein. They decided to act immediately.

At 9:30 p.m. that day, police led by Karl Schütz stormed SPIEGEL headquarters in Hamburg as the editorial team was working on the new issue. Police vans surrounded the building. Before long, the 117 rooms and 3,000 square meters (32,000 square feet) of office space were occupied. Phone calls were prohibited, and the magazine's work came to a halt. All the rooms were supposed to be vacated and sealed off. The journalists were cut off from the outside world.

A cat-and-mouse game began. Staff members protested while an editor hid in a closet and made telephone calls to the outside. Photographs were taken of the occupation, and the photographer gave the delicate film to a lab assistant who later smuggled it out of the building in her bra. Editor in chief Claus Jacobi (Augstein had already left the building) threatened to sue for damages. But he prevented the worst-case scenario from happening: The current issue was finished, under police supervision. But the proofs had to first be provided to the investigating judge -- an act of censorship which violated the German constitution.

Investigators examined everything from the broom cupboard to the kitchen. It wasn't long before the officers reached their limits. In theory, they would have to examine millions of documents: books, files, photos, every single sheet of paper. Eventually, a document was found in Augstein's safe with notes of conversations with a Bundeswehr officer. But in the end the evidence was not sufficient to achieve a conviction for treason.

SPIEGEL remained occupied by police for a month. The magazine could only be published because its competitors Stern and Die Zeit helped out by providing office space. Augstein was at that time already in custody; the man who police had searched for so obsessively had presented himself to the authorities on the day after the occupation of SPIEGEL.

From his cell, Augstein followed developments as his opponent Strauss slowly caused his own downfall. Strauss had overstepped the mark by ordering the arrest of Ahlers, the main author of the controversial cover story. On Oct. 26, Ahlers was on vacation in Spain. In the middle of the night, he was arrested in the resort of Torremolinos -- a move that was "somewhat outside the law," as Interior Minister Hermann Höcherl famously put it.

But Strauss pretended he was innocent. He had nothing to do with the sudden arrest, he told the German parliament, the Bundestag. In reality, he had telephoned the German military attaché in Madrid during the night and demanded that he arrest Ahlers immediately. "I am acting in this moment on behalf of the chancellor," Strauss had claimed. That was a lie, as was Strauss's claim in a second conversation that Augstein was already in communist Cuba, where the Soviet Union appeared to be engaged in an attempt to provoke a third world war during the Cuban missile crisis.

It was only after the defense minister had been put under pressure by the opposition Social Democrats for days that he started to admit the truth bit by bit -- triggering a political earthquake. The liberal Free Democratic Party, the junior partner in Adenauer's coalition government, was already feeling snubbed because its justice minister had been sidelined in the affair. Now they loudly demanded Strauss's resignation. All five FDP cabinet ministers resigned in protest on Nov. 19. Adenauer was forced to form a new government -- and dropped Strauss.

The maneuver allowed Adenaur to rescue his chancellorship. As it happened, Adenauer had harshly prejudged SPIEGEL before the investigation was completed, when he spoke of an "abyss of treason" in remarks to parliament. Augstein had profited from treason, he said, amid boos from the SPD. He added, with almost childish anger: "There are people who helped him by placing ads. I do not have a very high opinion of these people."

But the magazine hardly lost any advertisers because of the scandal. On the contrary, the publication ultimately benefited from the affair: Its circulation soared, and SPIEGEL suddenly became famous internationally. In his obsession with power, Strauss had gambled away any chance he had of becoming chancellor -- and inadvertently helped his hated adversary Augstein to achieve his greatest victory. 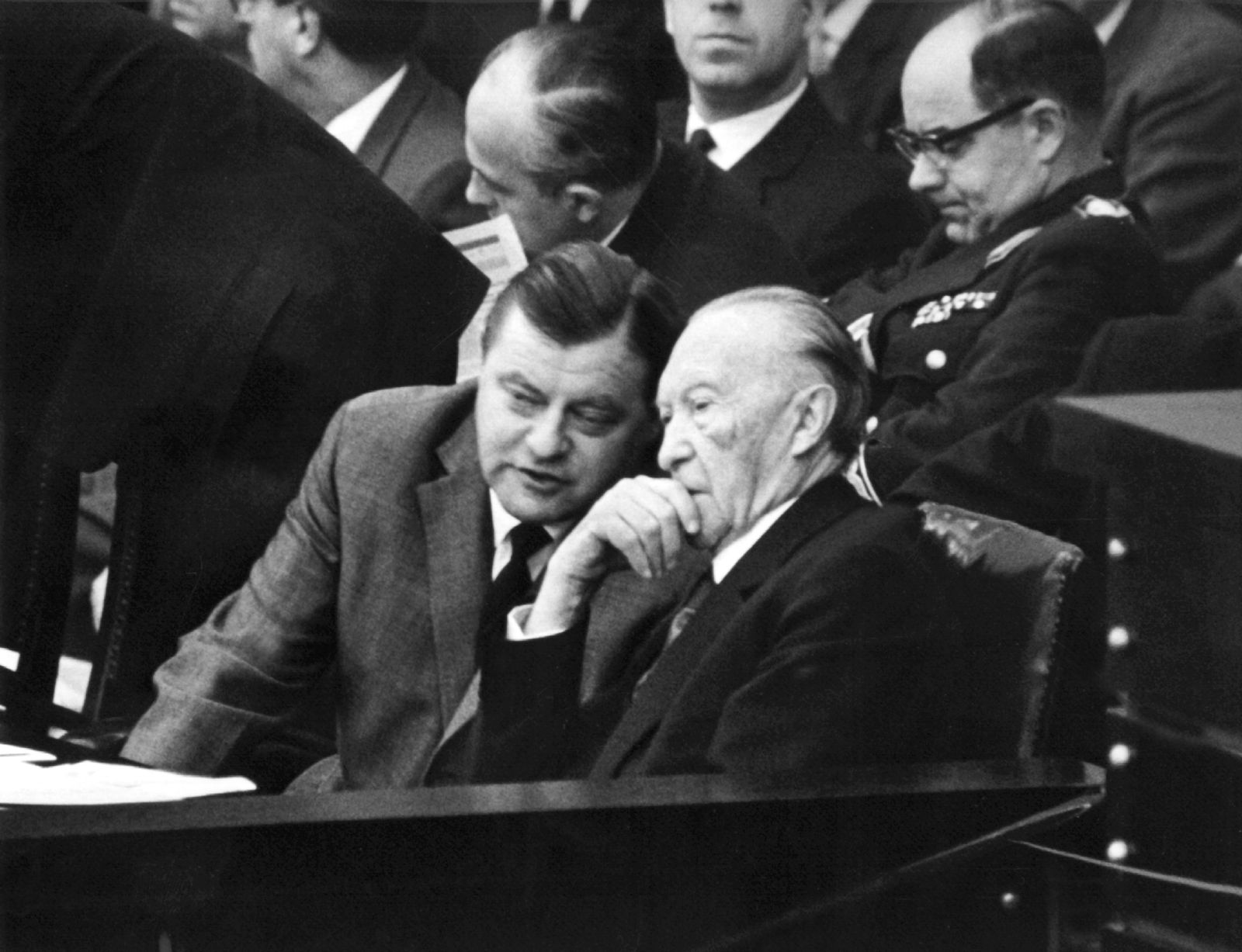 The scandal put both Strauss and Chancellor Konrad Adenauer under pressure. Strauss eventually had to resign and Adenauer's government collapsed. This photo shows the two men during a debate on the case in the Bundestag on Nov. 9.