Germany's Federal Prosecutor's Office issued a formal, Europe-wide manhunt order on Wednesday afternoon for a Tunisian man who is currently the main suspect in the terrorist attack on a Berlin Christmas market on Monday night. The man has been identified as 24-year-old Anis Amri and prosecutor's cited "strong suspicions" in the order.

The move came after investigators found an identity document in the cab of the semi-truck used in Monday's deadly attack. DER SPIEGEL and SPIEGEL TV reported earlier in the day that police had discovered an immigration document permitting the man, who was born in Tataouine and whose request for asylum had been rejected, to temporarily remain in Germany.

It is unclear when Amri arrived in Germany. Several entries have been found in government databases. What is known is that the suspect had been on the German authorities' radar for some time now. An entry relating to an undercover investigation of the man on Feb. 5 states, "Suspected ties with IS" and "intensive monitoring of the subject." Earlier this year, the authorities classified the man as a "potential threat," a category used by police to describe people the authorities believe could attack at any time. The German Interior Ministry has stated that 549 people across the country are currently classified as potential threats. They are the subject of frequent monitoring.

If the the person can be found, that is. 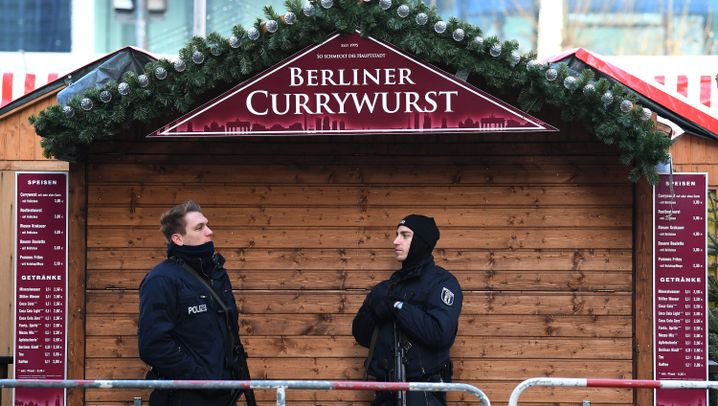 The problem with Amri is that his registered residence is an asylum-seekers' hostel in the city of Emmerich in North Rhine-Westphalia. But the 23-year-old apparently was not only "highly mobile" in moving around a lot, but also used a number of aliases. In Berlin, he is known to authorities as Ahmad Z. or as Mohamed H. of Egypt. On another occasion, he claimed to be from Lebanon.

On July 30, police intercepted Amri during a check on a long-distance bus traveling in the city of Friedrichshafen. The police determined during the check that the Tunisian was subject to deportation. Following a ruling by the district court in Ravensburg, the man was moved to the local detention center pending his deportation. Two days later, however, the man was released and the deportation did not get carried out.

Officials were unable to complete the deportation because the Tunisian didn't have a passport and required passport replacement documents from the authorities in Tunisia before he could be repatriated, Interior Minister Jäger said Wednesday afternoon. Initially, Tunisian authorities disputed Amri's citizenship, and later there were delays in the delivery of the necessary documents.

"Tunisian authorities provided these today," the SPD politician stated, adding, "I do not want to comment any further on this circumstance."

Jäger also stated Wednesday that Amri's name had been placed on list of potential attackers compiled by the German government's counter-terrorism center. The Federal Prosecutor's Office is now investigating possible charges relating to the preparation of a serious act of violent subversion. Jäger said the investigation is being led by the Public Prosecutor's Office in Berlin.

According to reporting by the Süddeutsche Zeitung newspaper and public broadcasters WDR and NDR, the police had wiretapped the suspect's telephone calls. It is unclear at the moment how security officials lost the suspect's trail.

On Wednesday afternoon, the Federal Prosecutor's Office issued a statement that it had officially commenced a manhunt for Amri. A reward of up to 100,000 euros is being offered for information leading to his arrest. But prosecutors have urged caution, noting that Amri may be "armed and violent." They are asking anyone with tips that could lead to his capture to inform officers at their nearest police station.

Police in Berlin have stated that they have received more than 500 tips since the attack and they have been pursuing a suspect who may be armed. A man who had been detained early in the investigation was released on Tuesday due to a lack of incriminating evidence.

Many questions still remain about Monday night's attack, which left 12 dead and 48 injured. Investigators believe that the Polish man who had been driving the truck prior to the attack was still alive when it happened. He only succumbed to a gunshot wound after emergency workers from the fire department arrived at the scene.

With additional reporting by Christoph Sydow 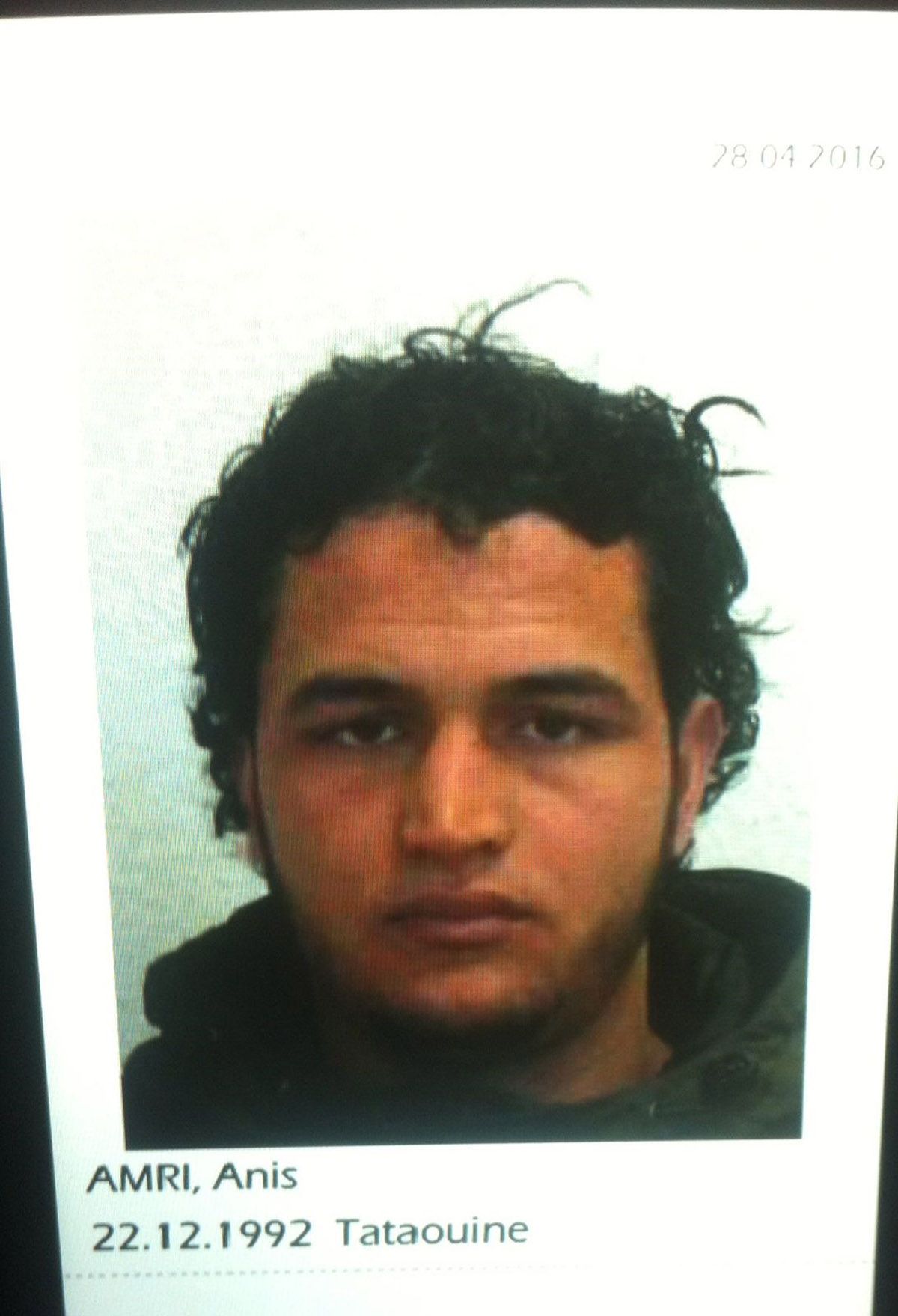 Germany is offering a 100,000-euro reward for information leading to the capture of suspect Anis Amri. 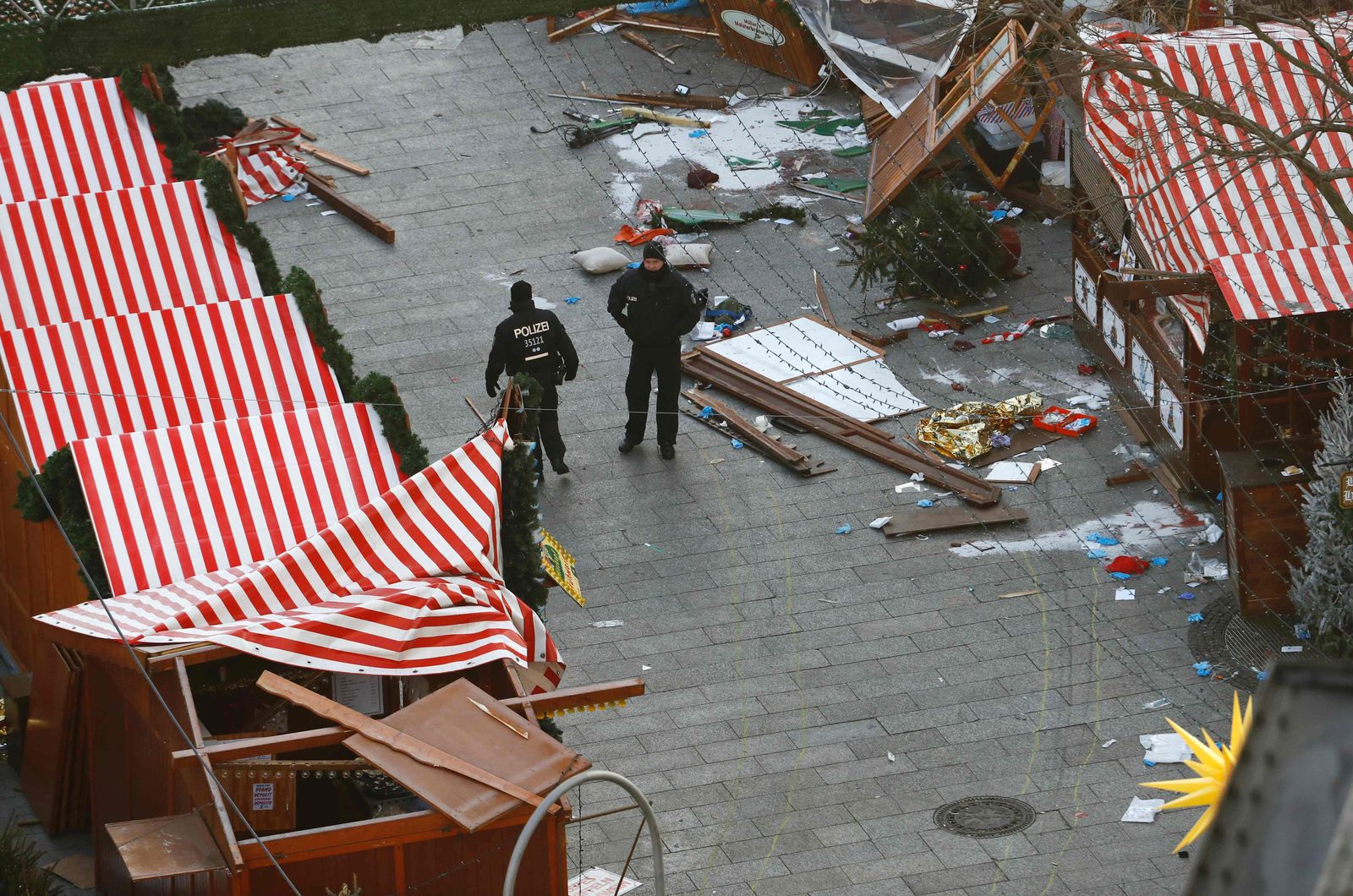 Police at the Christmas market in Berlin where 12 people were killed. 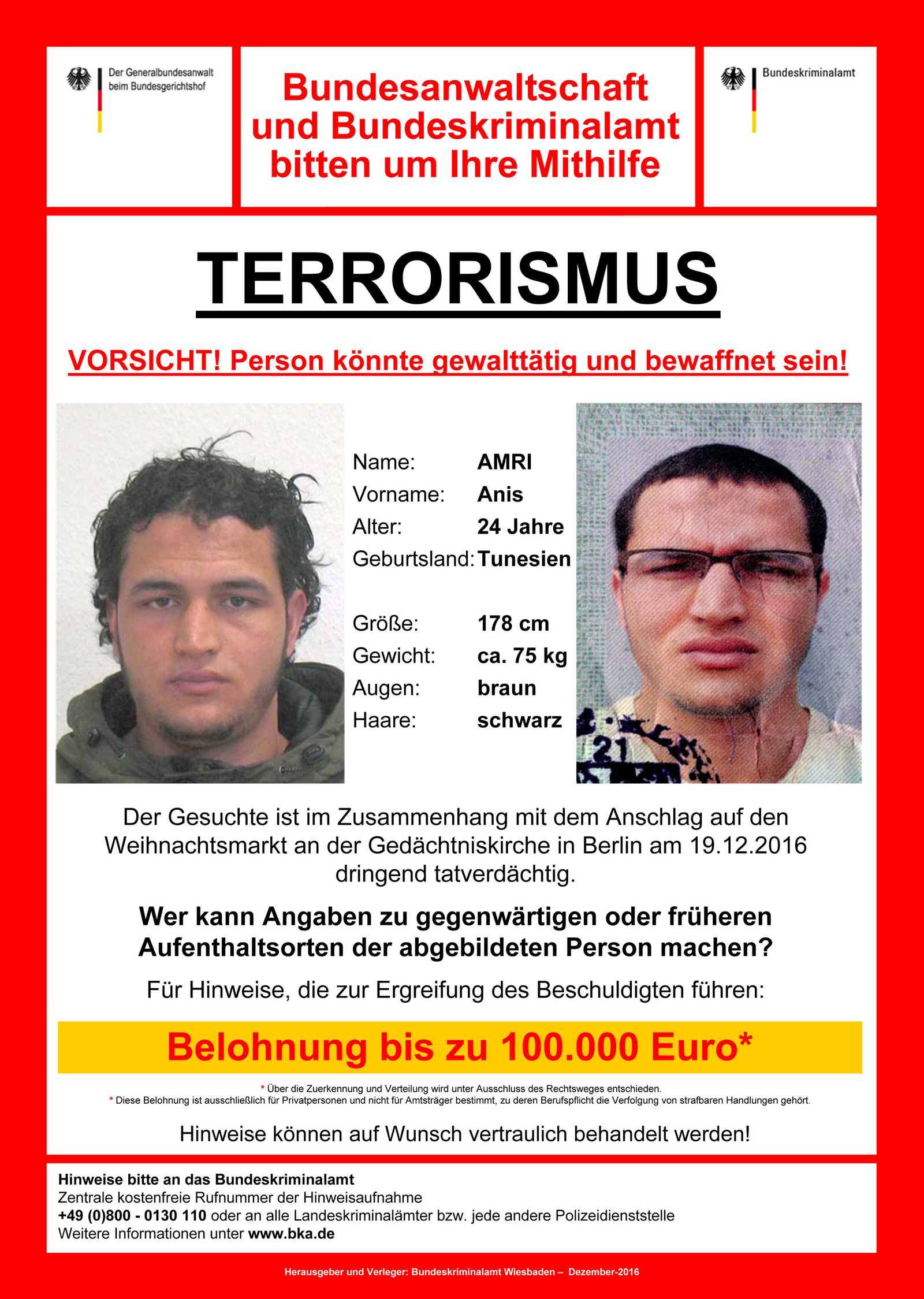