Mikhail Gorbachev was the general secretary of the Communist Party of the Soviet Union and the country's president until 1991. During his tenure, he pushed through important liberal reforms with his policies of perestroika ("restructuring") and glasnost ("openness") and helped end the Cold War. He was awarded the Nobel Peace Prize in 1990.

Today, the 88-year-old Gorbachev lives in a dacha in a Moscow suburb and continues to be an active participant in the political debate. For health reasons, only part of the interview was conducted in person in the offices of his foundation in Moscow. The rest was conducted in writing.

DER SPIEGEL: Mr. Gorbachev, the Berlin Wall came down on Nov. 9, 1989. Thirty years on, how do you look back on this event?

Gorbachev: My view of German unity is the same today as it was back then. Unification was one of the most important things I've ever done. It had a huge impact on many people's lives. I appreciate this day very much and I have great admiration for every person who was involved.

DER SPIEGEL: Did the fall of the Berlin Wall surprise you?

Gorbachev: We followed the events in the German Democratic Republic very closely. The demand for change was omnipresent. In early October 1989, during celebrations marking the 40th anniversary of the GDR's founding, I watched young members of the ruling party marching in columns and expressing their sympathy for our perestroika and chanting: 'Gorbachev, help us!' Spontaneous demonstrations were taking place in the large cities of the GDR and were becoming more massive every day. And there were an increasing number of banners that read, 'We are one people!' On Oct. 18, Erich Honecker had to vacate his post and was replaced by Egon Krenz. But the reforms came too late. In a meeting of our politburo on Nov. 3, a week before the fall of the Berlin Wall, during a discussion about the situation in Germany, the chairman of the Committee for State Security said: "Tomorrow, 500,000 people will take to the streets of Berlin and other cities..."

DER SPIEGEL: What responses did you consider?

Gorbachev: No one doubted that the Germans had a right to decide their own fate. But the interests of neighboring states and of the global community also had to be taken into account. My main responsibility was to rule out the possibility of violence. We negotiated intensively with (West German Chancellor) Helmut Kohl, Krenz, the Americans and Europe's leading figures. We had to prevent the German desire for reunification from reviving the Cold War.

DER SPIEGEL: Did military leaders in the GDR or the Soviet ambassador in East Berlin call for military intervention?

Gorbachev: We communicated with political leaders in the GDR, but I never maintained direct contacts with the military. It was our ambassador's job to inform us as precisely as possible about what was happening in the country and not to make any demands.

DER SPIEGEL: Were any demands made after Nov. 9 for the Berlin Wall to be rebuilt?

Gorbachev: I wasn't aware of any. But I don't rule out the possibility that some irresponsible people or fringe groups discussed such a ridiculous idea. Trying to hinder a historical process in such a manner is like trying to stop a train by lying down on the tracks.

DER SPIEGEL: Were you asked to close the border and deploy troops?

Gorbachev: Which borders should have been closed? Where should the troops have marched? There were 380,000 Soviet soldiers stationed in the GDR at the time. They obeyed orders to refrain from intervening.

DER SPIEGEL: Why did you permit the GDR, a close ally of Moscow's, to fall? In other places, such as the Baltic states in 1991, you were much tougher. Lithuanian demonstrations for their country's independence were brutally suppressed.

Gorbachev: We saw West Germany as a country that embarked on a path to democracy after the collapse of the Hitler regime. And unification is understood today, as it was 30 years ago, as the fulfillment of long-held desires of the citizens of East and West Germany. As far as I can tell from the many letters, these people are still grateful for Russia's support. You blame me for the bloodshed in Latvia and Lithuania. As president, I was of course responsible for everything that went on there. But if you study the documents from this time, you'll see that I always tried to solve conflicts politically.

DER SPIEGEL: When you came to power in 1985, you signaled to Eastern Bloc states that they had to be able to exist independently of Moscow. Did you suspect at the time that one day the wall between East and West would fall?

Gorbachev: Do you really believe that a wall separating East and West was our ideal scenario? Or a model for the future? We created perestroika to lead the country out of a dead end. In order for the state and economy to flourish, we needed good relations not just with our neighbors, but with the entire world. We didn't need the Iron Curtain. We wanted to get rid of the wall of mistrust between East and West -- and all other walls, for that matter, between states, groups of people and individuals.

DER SPIEGEL: You have studied Marxist-Leninist ideas. How did it come about that you began fighting for the right of nations to self-determination? Why did a Marxist, of all people, allow the fall of the Berlin Wall to happen?

Gorbachev: I can see that you've long since forgotten what it was that Marx, Engels or Lenin wrote. Or perhaps you never read them? Here's a famous quote: "A nation cannot become free and at the same time continue to oppress other nations." In 1914, Lenin wrote a book called, "The Right of Nations to Self-Determination." Then, after the October Revolution, he argued with Stalin about this subject. The Stalinist USSR was, in the end, a unified, strictly centralized state. Our allies, the countries of Eastern Europe, were also under the strict surveillance of Moscow. During the years of perestroika, we abandoned the "doctrine of limited sovereignty." When I told the leaders of these countries that they were independent in their decisions, many did not believe me at first. But we turned words into deeds. That is why we did not interfere in the reunification of Germany.

DER SPIEGEL: You gave the Germans reunification but soon after, you lost your position and the USSR disintegrated. How do you look back on this today?

Gorbachev: Why don't you just ask me whether I regret perestroika? No, I don't. It was impossible to go on living like before. And an essential piece of perestroika was this new kind of foreign policy thinking. It included universal values and nuclear disarmament as well as free elections. We couldn't deprive neighboring countries, the Germans, Czechs, Slovaks, Hungarians, of the rights and liberties that we granted our own people. When we began perestroika, we knew we were taking a risk. But the entire state leadership agreed that changes were necessary. The blame for the end of perestroika and the collapse of the Soviet Union lies in the hands of those who organized the August 1991 coup and took advantage of the weakened position of the president of the Soviet Union afterward.

DER SPIEGEL: Is the world a better place today than it was during the Cold War?

The article you are reading originally appeared in German in issue 46/2019 (November 9th, 2019) of DER SPIEGEL.

Gorbachev: I don't feel any nostalgia when it comes to the Cold War. And I don't wish it upon anyone that those times return. We must concede that after the end of the Cold War, new leaders failed to create a modern security architecture, especially in Europe. As a result, new dividing lines were created and NATO's eastward expansion shifted these lines to Russia's border.

DER SPIEGEL: Aren't relations between Russia and the West just as bad today as during the Cold War?

Gorbachev: If one keeps repeating the same demands over and over, nothing good can come of it. There are signs that both the West and Russia understand that communication channels must be activated. The rhetoric is gradually changing. Perhaps this is the first step. Of course, we still have a long way to go before confidence is restored. I am convinced that we must begin with nuclear disarmament. I recently called on all nuclear powers to make a joint declaration against nuclear war. Negotiations must resume between Russia and the United States and consultations must begin with other nuclear powers.

DER SPIEGEL: Many people in Europe are following events in Russia with concern. It seems Moscow has abandoned the principles of perestroika.

Gorbachev: I don't think the situation is as dramatic as you describe it. People know very well to appreciate the progress that has been made in this country. Now we face a new challenge: globalization.

DER SPIEGEL: What attitude should a reunified Germany adopt toward Russia?

Gorbachev: It's important that Germans, including politicians, understand the Russians. Russia went through autocracy, serfdom and the repressive Stalinist regime. It is a difficult history. In the 1980s, we embarked on the path of reform. There were mistakes and failures. We can argue about how far we have come on the road to real democracy, but we're not going to backslide into a totalitarian system. Today, we must forge ahead, using that which we have achieved as a basis. And we must do so in the spirit of the treaty we signed during the reunification of Germany.

DER SPIEGEL: Mr. Gorbachev, thank you for this interview. 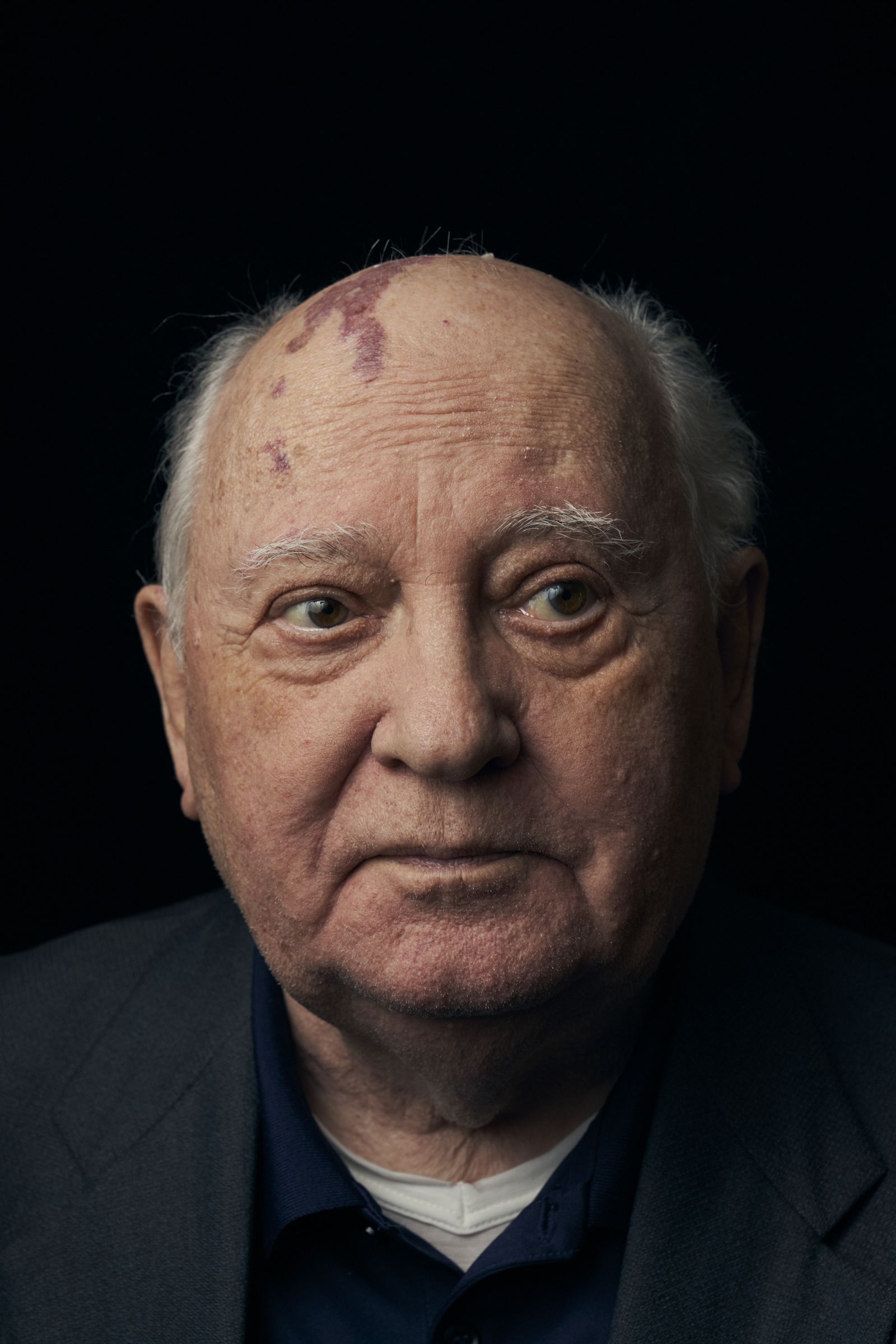