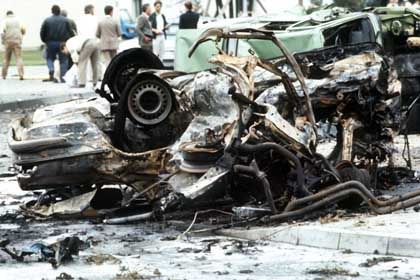 A US soldier and a civilian employee of the American military died in this RAF attack on the Rhein-Main Air Base in 1985.

Eva Haule spent her last hours as a free woman in the ice cream café "Dolomiti" in Rüsselsheim -- a town near Frankfurt. She was meeting with two supporters of the Red Army Faktion, the home-grown terror group to which she belonged. The trio attracted the attention of a person seated at a nearby table, who recognized them in police posters. Every time the waitress came to the table, the three would hurriedly gather together their papers.

The man called the police. Moments later, when two officers approached Haule's table with guns drawn, she chose not to pull her own pistol. On August 2, 1986 Eva Haule disappeared behind bars and was sentenced to life in prison eight years later.

Now, a Frankfurt court has announced that the ex-terrorist -- convicted of killing two Americans in a 1985 air base bombing -- will be released on parole. The court ruled that the former RAF member no longer presented a threat to society. With her release, only two former members of the RAF -- which disbanded in 1998 -- will remain behind bars: Haule's former comrade-in-arms Birgit Hogefeld and Christian Klar, arrested in 1982.

Born in 1954, Haule grew up in southern Germany. In 1979 -- while nominally studying social work though already a full-time political activist - Haule moved to West Berlin, where she visited imprisoned members of Movement 2nd June and became part of the militant squatter movement. But sporadic street fights with anarchists did not completely satisfy her. She wanted to use tougher methods against the government. Her steely determination stood out even then.

But in the early 1980s, there weren't many groups Haule could turn to. In the period following the arrests of Christian Klar, Brigitte Mohnhaupt and the remaining members of the RAF's "second generation" in November 1982, the terrorist group was significantly weakened. The RAF of the early '80s lacked not only members but also the logistical capabilities to carry out attacks.

But in early 1984, Haule went underground with veteran RAF supporters Birgit Hogefeld and Wolfgang Grams and joined up with a group trying to rebuild the terror organization. A major setback, though, quickly followed. After a number of RAF members had assembled in a safe house, a pistol accidentally fired a bullet through the floor and into the apartment of an electrician living below. The man only realized what happen when a stranger rang his bell and explained that she had a water leak in the flat above his and was wondering if it had seeped down into his apartment. The electrician then looked up at his ceiling, saw a hole it, saw the bullet in his floor and called the police.

At the hideout, the police were also able to confiscate 8,400 pages of documents, most importantly strategy papers and reconnaissance plans. Among the latter were details about planned RAF victims, such as defense industry magnate Ernst Zimmermann and Karl Heinz Beckurts, a member of Siemens' board of directors.

Once again it looked as though the RAF was at an end. But soon, like a hydra, the terror group grew yet another new head. Haule, Hogefeld, Grams and maybe other, still-unidentified RAF members continued.

Four months after the Frankfurt arrests, RAF members robbed a gun store in Maxdorf -- just south of Frankfurt -- and made off with 22 pistols and 2,800 rounds of ammunition. The arsenal was full once again. One month later, on Dec. 18, 1984, it was time to go on the offensive. The group parked a car loaded with a 25-kilogram bomb in front of the main gate of a NATO training center in Oberammergau. But the detonator failed.

At the end of January 1985, a commando from the French terrorist group Action Directe shot a director of the French Defense Ministry in Paris. The group's tight bonds with the RAF quickly became clear. The statement released by the French group following the murder was signed by the "Elisabeth von Dyck Commando" -- named after an RAF member who was shot to death by police in Nuremberg in 1979.

Exactly one week after the Paris attack, a woman rang Ernst Zimmerman's doorbell in Gauting, near Munich. She claimed to be the mail carrier and that she needed a signature. When Zimmerman -- a manager at a company which built turbines for fighter planes and engines for tanks -- opened the door, he was confronted by a man wielding an automatic weapon. The duo tied up Zimmerman and his wife before taking him into the bedroom. Once there, he was executed with a shot through his head. The murder has gone unsolved.

The third generation of the RAF had found its modus operendi -- a style of killing it stayed true to until the 1991 murder of Detlev Karsten Rohwedder, responsible for selling off former East German state property following 1990 reunification. It was also clear to the investigators that the new RAF was extremely professional. Although Zimmerman's murderer wore no gloves, there were no fingerprints left behind.

It was then that the RAF carried out an attack that cut the already slender ties to Germany's leftist-radical scene once and for all. A woman in the Wiesbaden club "Western Saloon" began flirting with 20-year-old US soldier Edward Pimental. The GI left the disco with her -- and was found dead the next morning in a nearby forest.

Just why Pimental had to die quickly became apparent. On Aug. 8, 1985, a car bomb ripped through a parking lot at the Rhein-Main Air Base, killing Airman First Class Frank Scarton and Becky Bristol, a civilian employee. Another 23 people were injured in the blast. The perpetrators had used Pimental's ID to get on the base.

Numerous leftists, including jailed RAF members, publicly criticized the murder of the young US soldier and the air base attack. In response, the RAF said: "We are not misty-eyed social workers."

Indeed. Just four weeks before the August 1986 arrest of Eva Haule, a commando blew up the BMW of Siemens board member Karl Heinz Beckurts. He and his driver, Eckherd Groppler, both died in the attack.

When Haule was arrested, German public prosecutors knew that she was an active member of RAF commandos. But they didn't know much more. Like almost all RAF members who had fallen into the hands of the authorities, she refused to talk.

But that didn't protect her from being sent to the slammer. In 1988, she was sentenced to 15 years in prison after being convicted on 23 counts of attempted murder -- based partially on weak evidence -- for the attack on the NATO training center in Oberammergau. But that wasn't the only time she was prosecuted. After a secret message from Haule was found in a fellow-inmate's cell in which she wrote of "we" in reference to the air base attack, she immediately became a prime suspect in the bombing. Despite serious doubts voiced by Germany's Federal Criminal Police Office, in 1994 a Frankfurt court sentenced her to life in prison.

Since she has been in prison, Haule has -- like Brigitte Mohnhaupt, who was released from jail in March -- opted to show no remorse for her actions as an RAF member. She cut off relations with Birgit Hogefeld, an RAF member who distanced herself from the group's activities. Like her friend Helmut Pohl, she never gave interviews about the RAF. Instead, she has become involved in helping political prisoners.

And the man in the ice cream café in Rüsselsheim who tipped off the police 21 years ago? For him, it was a worthwhile phone call. He was awarded 100,000 German marks for his trouble -- tax free.