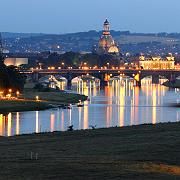 The urban panorama of Dresden's Baroque skyline and the majestic River Elbe have provoked many a poet and other sensitive types to fall in love at first sight. Although the city was extensively destroyed during World War II much of the famous architecture along the river bank has since been restored, including the city's beautiful cathedral.

While other cities have forced their rivers into concrete basins, Dresden left the Elbe in its natural riverbed. Its banks are a unique interplay of nature and culture -- so unique, in fact, that the Dresden Elbe Valley was awarded the much-coveted title of "World Heritage Site" three years ago by the United Nations Educational, Scientific and Cultural Organization (UNESCO).

But now plans to build a bridge across the Elbe to remedy inner city traffic congestion have triggered a storm of controversy, which threatens to damage Germany's reputation as a cultural nation. What began as a local news story has developed, during the past days and weeks, into a problem for the whole country. Several government ministries are now dealing with the dispute. At issue is how Germany, the country which invented the preservation of historical monuments, treats its own cultural heritage.

Germany has more World Heritage sites than any other country -- a full 32 out of a total of 851. And there is great demand for the UNESCO seal of approval, which officially recognizes a country's historical or cultural sites as being of international importance. Heidelberg made a huge effort to have its historic city center and castle included on the list, but last week it failed to impress the UNESCO committee and Heidelberg is feeling hard-done-by. But then there are those people who could care less about the prestigious heritage status -- like Dresden's stubborn decision makers.

UNESCO already warned last year that the planned bridge would interfere so massively with the Dresden Elbe Valley that the city might have to surrender its place on the list of World Heritage sites. The Social Democrats (SPD), the Green Party and the Left Party on Dresden's city council share the same concerns. But Saxony's state government and its Governor Georg Milbradt, a member of the Christian Democrats (CDU), want to construct the bridge at all costs, and to keep to the original plans: a four-lane bulky bridge, a brutal gash across the landscape. Milbradt has already ordered the city to begin awarding construction contracts.

In forcing through the construction, the governor can point to a 2005 referendum, in which Dresden's residents voted in favor of the bridge. But at the time, they were not given the option of choosing between a bridge and a tunnel: It was just bridge or no bridge. Since then judges in Saxony and even the German Constitutional Court have ruled that the referendum has more legal weight than UNESCO's World Heritage Committee. The referendum is binding for three years and this time period will have elapsed in February 2008 -- which is why Milbradt wants to move quickly to make the construction of the bridge a fait accompli.

But many Dresden residents who voted in favor of the bridge in 2005 are now siding with UNESCO. Thousands of Dresden residents are taking to the streets to demonstrate against the bridge and Hanne Wandtke, an internationally renowned choreographer, cried out during a rally that she wants her vote back.

Meanwhile, the Stuttgart-based architectural office Schlaich has presented a model of an alternative filigree bridge but the Saxony government doesnt want to know. Milbradt complains that he is being "put under pressure" by UNESCO and even speaks of "blackmail."

He is talking about the resolution UNESCO passed during the 31st session of its World Heritage Committee, held in Christchurch, New Zealand last week. Eighteen thousand kilometers (11,185 miles) away from Dresden, representatives of UNESCO's member countries met -- almost like the cultural equivalent of the UN Security Council -- in order to identify new World Heritage sites and to discuss Dresden.

On the morning of Monday Jan. 25 -- it was the middle of the night in Germany -- item 27 on the agenda was the decision on whether the Dresden Elbe Valley could keep its World Heritage status. The chairman of the session announced the topic and a debate started immediately. National representatives from Norway, Latvia, Morocco, Benin, Kenya, Israel, Peru and the United States spoke in turn, sometimes in English, sometimes in French or Spanish. But in the end their stance was perfectly clear. The committee announced that Dresden has four months to come up with an alternative plan. UNESCO would prefer not to make an example of Dresden, recognizing that the city is in a tricky situation. After all, Germany is the biggest financial contributor to the organization.

Dresden is Faced with a Difficult Choice

The committee's preference is for a tunnel, in fact 19 out of 21 committee members spoke in favor of this solution -- partly due to a poll of Dresden residents which showed that 60 percent are now in favor of that solution. But Dresden's deputy mayor Herbert Fessenmayr, who was also present in New Zealand, pointed out that a tunnel would be €50 million ($68 million) more expensive than the €119 million ($162 million) bridge proposal, and that it would cause considerably more legal complications for Dresden. UNESCO was willing to hear him out and signaled that it would also accept an alternative bridge design. 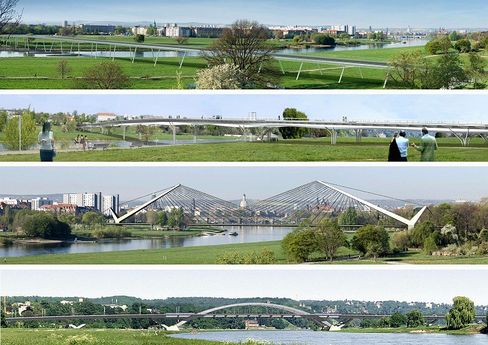 The alternative models for a bridge in Dresden.

If Dresden opts for a plan to which the International Council on Monuments and Sites (ICOMOS) gives its blessing, then the Dresden Elbe Valley will continue to be recognized as a World Heritage site by UNESCO. But if no compromise is sought, then Dresden is looking at being struck off the prestigious list. UNESCO removed a site from the list for the first time this year, when it took away the World Heritage status from a nature protection area in Oman, due to plans to convert it into an oil field.

Dresden is faced with a choice, and it is one that the rest of Germany cannot afford to ignore. It was no accident that the speakers in New Zealand always talked about Germany when they meant Dresden. If the Germans aren't able to protect their cultural heritage, then how are poorer countries supposed to manage it, when they have to make much greater efforts to preserve their heritages?

Taking care of a cultural heritage site may be expensive, but it also pays off: After all the travel-happy Japanese diligently visit the World Heritage sites in Europe. And it is estimated that since the northern German city of Lübeck was included on the UNESCO list in 1987 it has seen twice as many visitors.

Once a site has made it onto the list, decision makers normally do all they can to make sure it stays there. The Everglades in Florida and the Kathmandu Valley were long considered to be "World Heritage in Danger" by UNESCO, but both regions were rehabilitated in New Zealand and removed from its Red List.

German planners' tendency towards architectural barbarism has often been a cause of concern to UNESCO. In Cologne, for example, there were plans for skyscrapers that would have obstructed the view of the city's famous cathedral. Fortunately it was possible to convince the city's government that it would be more appropriate to build lower buildings. And wind turbines were about to clutter the vast open landscape near Wartburg Castle in Germany's Thuringia region. But thanks to UNESCO's intervention, the local residents took legal action against the plans. Not even the romantic Loreley, the rock on the eastern bank of the River Rhine that inspired Heinrich Heine's poem, is safe from the insanity of the traffic planners. They were planning to build a bridge right across the famous site, but then UNESCO objected and the local authorities are now considering building a tunnel instead, according to Mayor Dieter Clasen. 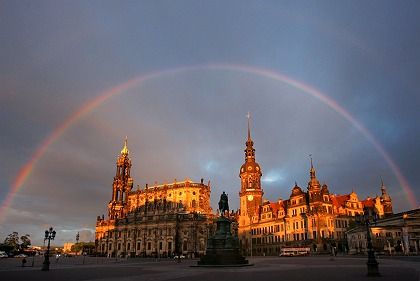 Dresden is facing a difficult decision.

UNESCO's objections can also often provoke resentment, with local politicians accusing the UN organization of hindering progress. But these debates are characterized by a strangely schizophrenic attitude. On the one hand, the Germans are eager to rebuild historic sites; on the other hand, demolition seems to be one of their favorite pastimes.

While Berlin's City Palace, or Stadtschloss -- the historic Imperial residence -- is being rebuilt, and an entire ensemble of historic buildings is being restored in Frankfurt, there has also been an unprecedented series of demolitions. More than 100,000 German monuments have been destroyed in recent years and far more historic buildings have been torn down since 1945 than were destroyed during the bombings in World War II.

The temptation is great: After all preserving architectural jewels from the past is a constant financial drain, whereas their demolition only has to be paid for once. The world's beauties need powerful protectors and that is where UNESCO comes in. Now the rest of Germany is waiting for a decision from Dresden -- and hoping its the right one.