On most days, Ruprecht Polenz is not one to lose his calm. Head of the Foreign Affairs Committee in German parliament and a senior member of Chancellor Angela Merkel's Christian Democrats, Polenz tends only to show emotion if the situation calls for it. The special meeting of parliamentary conservatives last Friday was such an occasion.

Merkel had just finished explaining her government's position on Libya -- a day after Germany had abstained from the United Nations Security Council vote which authorized the establishment of a no-fly zone in Libya and the use of force to protect civilians from violence by Libyan dictator Moammar Gadhafi. Portugal, a non-permanent member of the Council, joined permanent members France, Britain and the US in supporting the resolution. Germany was the only Western country among the five abstentions.

Merkel told parliamentary conservatives that Germany would not provide crew members for AWACS surveillance flights over Libya. Instead, she explained, she foresees a greater German engagement in Afghanistan as a way of freeing up personnel from other countries which could then be used in operations against Gadhafi. Germany, she made clear, would not be participating in military operations against Libya.

It was at that point that Merkel's explanation became too much for Polenz to handle. "You can't do that! That is a catastrophic signal," he said. With its abstention, Polenz pointed out, Germany had joined ranks with China, Russia, India and Brazil. That, he continued, is not the kind of company that Germany should be keeping.

Polenz's entreaty was the beginning of an emotional debate within the conservative camp. Christian Ruck, a politician from the Christian Social Union, the Bavarian sister party to Merkel's CDU, said he too was opposed to the abstention. "The European Union is falling apart," he complained. "This is a poor signal to the freedom movements in Arab countries." CDU parliamentarian Hartwig Fischer added that it looks bad for Germany to say, no matter what happens in Libya, we won't help.

The conservative uprising shows just how difficult it has been for Berlin to find a position on Libya. Since World War II, Germany has been at pains to avoid isolating itself on foreign policy questions. Even in the run up to the US invasion of Iraq in 2003, Berlin had Paris at its side in rejecting military operations.

This time around, however, Germany is totally isolated among its allies. Merkel's government, it would seem, simply refused to believe that the Security Council would ultimately authorize the imposition of a no-fly zone in Libya. And by the time the US and other countries had changed their minds, Germany's position has become too firm to change. Suddenly, Berlin was alone.

Merkel's government was not totally devoid of arguments. It remains unclear whether Gadhafi can be stopped by air power alone -- and there is certainly a risk that the countries involved could ultimately be forced to send in ground troops. "We have to think the situation through to the end," Merkel told her conservatives at the meeting last Friday.

But many politicians within Merkel's ruling coalition simply don't understand why Germany refuses to provide military assistance to pro-democracy movements in the Arab world, particularly given that Foreign Minister Guido Westerwelle had been particularly effusive in his praise of such movements. "The signal to pro-democracy efforts in other Arab countries is extremely problematic," said one government politician.

Chasm between Rhetoric and Action

The decision and the ensuing debate show that it is much easier to strive for an important role on the global political stage than it is to play such a role. Germany's efforts to avoid involvement in the Libyan civil war are certainly legitimate. But they don't fit well with Westerwelle's position, reiterated in this week's interview with SPIEGEL. "Gadhafi must go, there's no question about that," Westerwelle said.

The chasm between rhetoric and action is one that parliamentarians likewise find problematic. Polenz spoke of an "operational gap" within Germany's position. Berlin wants to see the back of Gadhafi, but refuses to do anything to make it possible.

Still, it has not just been the government which has found it difficult to arrive at a position on Libya. The center-left Social Democrats were distinctly subdued in their response to the Security Council abstention. Even as one senior SPD politician called the German position a "disgrace," the party's floor leader, Frank-Walter Steinmeier, said "the German government's vote is coherent and understandable." Party leader Sigmar Gabriel initially struck a similar tone.

Since then, however, the party has decided to go on the offensive after all. "With his vote, Westerwelle has isolated Germany internationally and divided Europe," Gabriel told the Sunday paper Tagesspiegel am Sonntag. In the Monday edition of Süddeutsche Zeitung, he adds "I consider the decision to be the wrong one."

The Green Party has likewise struggled to find a coherent response. Co-floor leader Renate Künast on Friday took a quick survey of where Green Party parliamentarians stood on the issue, with 28 of those present critical of Germany's reserve and 13 supporting the abstention. Despite the result, surprisingly clear given the party's pacifist roots, Künast declined to go on the offensive. In a press statement signed together with co-floor leader Jürgen Trittin, she merely praised the Security Council vote, without mentioning Germany's position.

Party co-leader Cem Özdemir, however, was in no mood to keep quiet. In a Friday interview with SPIEGEL ONLINE, he said "despite the risks associated with a no-fly zone, Germany should have voted on the side of its European partners like France and Great Britain." He also expressed relief that Germany did not block the resolution. "I am pleased by the (Security Council) decision and I sincerely hope that it hasn't come too late," he said.

The abstention is likely to damage Foreign Minister Guido Westerwelle more than other German politicians, though. He had vocally backed the pro-democracy uprisings in the Arab world, and had gained profile as a result. Merkel has largely allowed Westerwelle to take the lead on the issue.

Now, Germany's Council abstention could slow down his hard-won renaissance. His hope was that the German population would support his course. "I don't want to see German soldiers taking part," he told FDP parliamentarians on Friday. "Eighty to 85 percent of the German population shares my position." Still, he is also aware that allowing Gadhafi a free hand in Libya is not particularly popular either.

Explaining the German position is even more difficult for the foreign minister because the conditions that Germany set for the establishment of a no-fly zone have been largely fulfilled. In addition to the Security Council resolution, Berlin wanted the approval of the Arab League, which duly expressed its support for a no-fly zone at the beginning of last week. Qatar and the United Arab Emirates are both taking part in the Libya operations.

FDP parliamentarians have refrained from directly criticizing party leader Westerwelle. Some, however, have made it clear that they are not entirely pleased with his course. "We are light years away from a unified European Union position," complained Bijan Djir-Sarai, an FDP foreign policy specialist.

Irrespective of Berlin's position, Ashton herself said "the European Union is prepared to implement this resolution." Germany had sought to weaken Ashton's statement, for fear that it would look as though Berlin stood in opposition to its EU partners.

But the ignominy cannot now be ignored, the rift is apparent to all. "Germany's vote has weakened the EU," said FDP member of European Parliament Alexander Graf Lambsdorff. "The fact that the Arab League is more capable of action than the European Union should give us pause for thought." 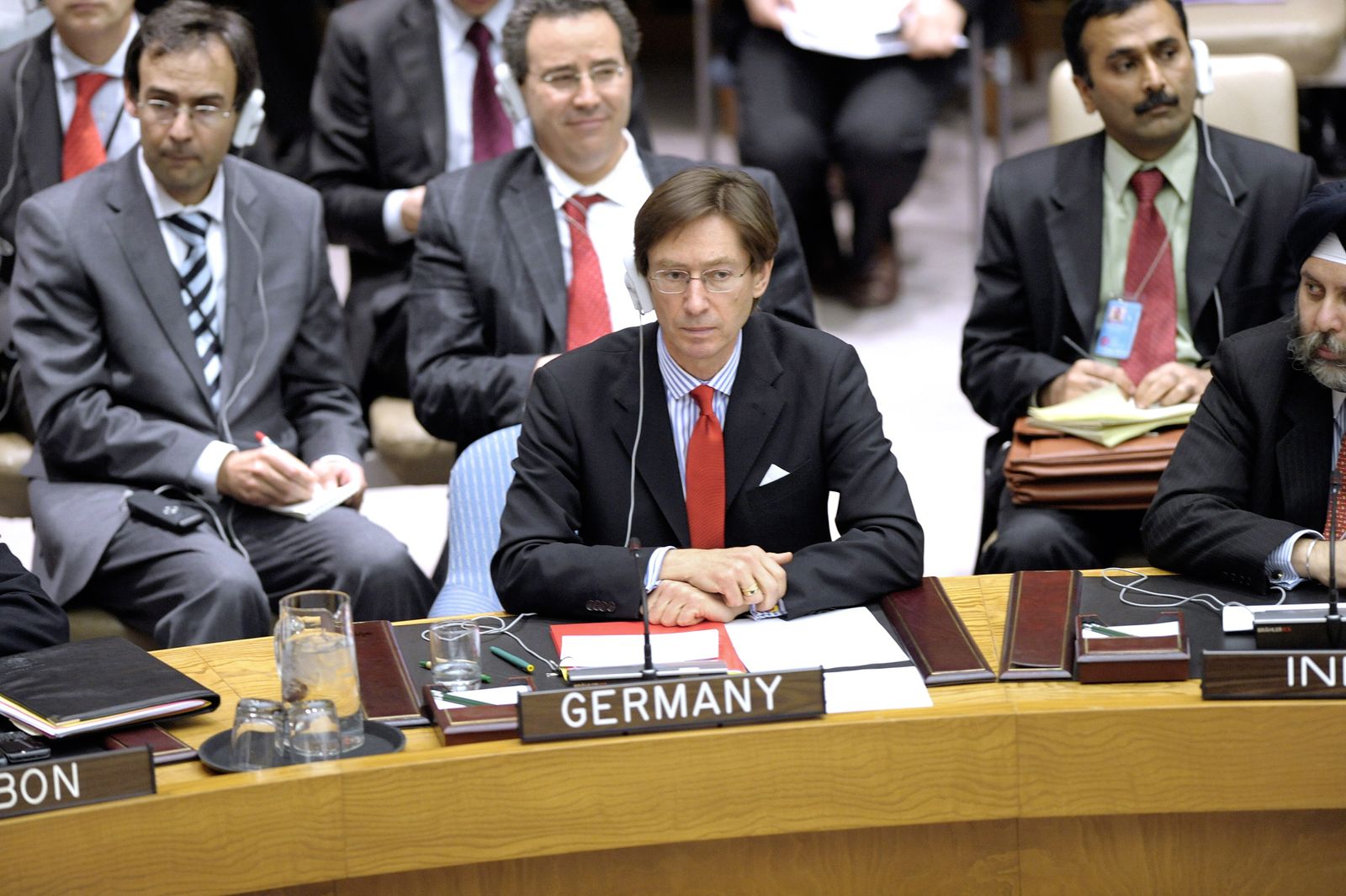