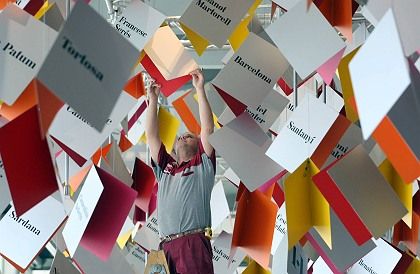 Catalonia is this year's guest of honor at the Frankfurt Book Fair.

The Frankfurt Book Fair is all about bringing the international publishing world together. The guest of honor, usually a country or region, plays a special role in furthering that idea, serving as a forum for interaction among countries, cultural regions and linguistic regions, as well as facilitating negotiations in the sale of publishing rights. Experts agree that a guest of honor's presence at the fair is an important economic factor.

Nevertheless, the relevance of the concept has been questioned time and again in recent years. Is it still a vibrant discussion platform, or has it degenerated into an opportunity for touristic navel-gazing and an uncritical opportunity for self-promotion?

The debate is especially heated over this year's choice of Catalonia as the guest of honor, a small linguistic region with controversial cultural policies. The areas where Catalan is spoken include Catalonia itself, the Balearic Islands, Valencia, the tiny principality of Andorra, a few towns in Spain's Aragon region, and the community of L'Alguer on the Italian island of Sardinia.

To varying degrees, Catalan enjoys the status of an official language in most of these regions. But Catalonia has caused a significant uproar with its closed-minded policy of not including the many Catalans who write in Spanish in its definition of Catalan literature.

The Catalan regional government has hired the Ramon Llull Institute, a cultural organization similar to Germany's Goethe Institute, to stage the exhibit. The institute is named after a medieval scholar from Mallorca who, in the 13th century, when Latin was the language of philosophy, theology and poetry, also used the new Romance languages to write about the dialogue between the Christian and Muslim worlds. But the institute has retained little of its namesake's cosmopolitan approach.

Because their language was banned under the Franco dictatorship, many Catalans are especially keen to stress the independence and importance of their language. And yet despite the fact that Franco has been dead 32 years, a relaxed linguistic and cultural coexistence between the Catalan and Spanish cultures remains as distant as ever. In fact, the pendulum seems to be swinging in the opposite direction today, with a certain undercurrent of nationalism not uncommon in the regions where Catalan is spoken.

Rivalries within Spain led to heated discussions in the run-up to the book fair. Sergi Pámies, one of the best authors writing in Catalan, declined an invitation to attend the Frankfurt fair, saying that he preferred not to be exploited for nationalist purposes.

Shouldn't an international book fair invite countries and regions as its guests of honor that widen instead of narrow our perspective, that set new directions instead of airing old nationalist sentiments?

It was Volker Neumann, the former head of the Frankfurt Book Fair (from 2002 to 2005), who invited Catalonia, apparently without considering the problematic nature of inviting a linguistic region in which regional nationalism is thriving, more so than in most other parts of Europe. Critics already say that the choice of Catalonia brings the guest of honor concept to a low point.

Catalonia's presence at the fair isn't lacking financial support. The official budget for the Catalan exhibit is €12 million, one of the largest in the history of the guest of honor program. Both the Arab world and Russia each spent only €5 million on their respective exhibits in 2004 and 2003. Lithuania, a small country, managed to spend only €1.5 million in 2002, and yet its exhibit at the fair was very successful.

Of course, the cost of an exhibit is not always directly related to its success. What determines success is whether an appearance at the Frankfurt Book Fair stimulates lasting interest for the literature of the respective country, as it did for Dutch literature in 1993.

The joint exhibit by Belgium's Flanders region and the Netherlands was an eye-opening experience for all book lovers. It helped, for example, to raise the profile of Dutch author Harry Mulisch in Germany. And since then Dutch literature has secured a permanent place in German publishing houses and book stores -- the ideal outcome of a guest appearance in Frankfurt.

Peter Weidhaas, the director of the Frankfurt Book Fair for many years, developed the concept of special topics and guest of honor appearances. Weidhaas's idea made its debut in 1976 when the fair featured half a continent -- Latin America. And what a success it was. Indeed, that year's Frankfurt Book Fair was at least partly responsible for the subsequent meteoric rise in the popularity of Latin American literature in Europe.

Some of the greatest names in world literature, like Mexican writer Juan Rulfo, Peruvian writer Mario Vargas Llosa and Brazilian writer Jorge Amado attended the 1976 fair. The Argentine writer Julio Cortázar, who was living in exile in Paris at the time, also attended. A military junta had just taken power in his native Argentina.

The Politics of Books

Weidhaas describes the wild early years of the guest country concept in his recently published autobiography, "Und kam in die Welt der Büchermenschen" ("And So I Found Myself in the World of Book People"). Weidhaas writes about a visit he received from the Argentine military junta's ambassador, who wanted him to rescind his invitation to Cortázar and invite Jorge Luis Borges instead: the blind Argentine author had welcomed the military dictatorship (a position he later reversed).

But Weidhaas refused. Shortly after the fair, he returned home to find his apartment ransacked and the tires of his car slashed. His decision to stick with Cortázar was his alone, because extending invitations to authors was the Frankfurt organizer's prerogative at the time, and not that of the respective guest countries or regions. The fair paid for the program and determined its contents.

The guest of honor appearances were initially not an annual occurrence, but instead were alternated with special topics. The 1978 special topic, "Children and Books," turned into a fiasco when a study found evidence of racism in 900 German children's books. African identity was the topic in 1980, and in 1982 the fair was dedicated to religion. The topic of the 1984 book fair -- the dangers of a future totalitarian state -- stemmed from the famous title of George Orwell's novel "1984," which had come to symbolize the dystopian vision of a society where the individual is under total surveillance and control. Ten years after Latin America's resounding success as a guest of honor, the literature of the Indian subcontinent was presented in 1986.

"My goal was to bring together and stimulate discussion of global problems in one building," says Peter Weidhaas as he looks back on his work as the seminal director of the Frankfurt Book Fair. But he was apparently ahead of his time when he chose India in 1986. The topic was unpopular and the media remained caught in its prejudices. Unlike 2006, when India had its second appearance as a guest country at the fair, the 1986 event failed to stimulate interest in the country's literature.

The Indian fiasco led to a significant change in the program. The next guest country, Italy, was the first to fund and structure its exhibit at the fair, in 1988, spending 29 million German marks. The Frankfurt organizers were no longer able to pay the costs and opted to simply make the space available to the guest of honor. From then on, a different country or region staged its own exhibit in Frankfurt every year, paying for the event out of its own pocket. A new guest of honor concept had been established. Now the guest was also entitled to determine which authors it chose to invite to Frankfurt.

In the 1990s, the commercial aspects of publishing increasingly influenced the selection and presentations of the guest of honor. The Frankfurt Book Fair was no longer capable of upholding its original goal of being a platform for burning social and political issues. Lorenzo Rudolf, who succeed Peter Weidhaas and was the fair's director from 2000 to 2002, felt that the guest of honor concept was no longer up to date. He created the "Frankfurt Futura Mundi -- Bridges for a World Divided," held for the first time in October 2002. But many of the invited authors felt that discussing world affairs was too much to ask.

Rudolf's idea was unsuccessful and the book fair soon returned to the guest of honor concept. It is a tremendously complex and costly affair -- each guest of honor program takes at least two years to prepare -- but they generally prove to be visitor magnets. The guest-of-honor pavilions draw an average of 40,000 visitors per fair. "This sets the book fair apart," says Caroline Vogel, the fair's press spokeswoman. She says that the country theme helps people to remember each year's fair: "They say to themselves: That's right, it was India's year, or it was the Arab world's turn that year. It makes the fair more dynamic and stops it from getting boring."

Jürgen Boos, the current director of the Frankfurt Book Fair, wants to revive the political aspect of the guest of honor appearance, which has too often drifted into a tourist brochure-style promotion of the county in the past. The purpose of books, Boos reminds us, is not merely to entertain. "Turkey is next year's guest of honor, which introduces a new dimension," says Boos. "It's politically charged." He feels that part of his job is to educate and stimulate political discourse: "The next two guest countries, Turkey and China, are perfect choices in that respect."

Peter Weidhaas turned down Turkey during his tenure, because publishers there had been arrested for publishing books about the Kurdish minority. Meanwhile, the country has at least come closer to European standards, although, like China, which will be guest of honor in 2009, it is far from being a model democracy. Nevertheless, what happens in Turkey and China is exciting, and the issue of freedom of speech and opinion is central to an international book fair.

While Catalonia is being celebrated in Germany under the motto "Singular i Universal" ("Unique and Universal"), the next group of publishers is already traveling through Turkey to prepare for next year's fair. After all, the next guest will be arriving soon.