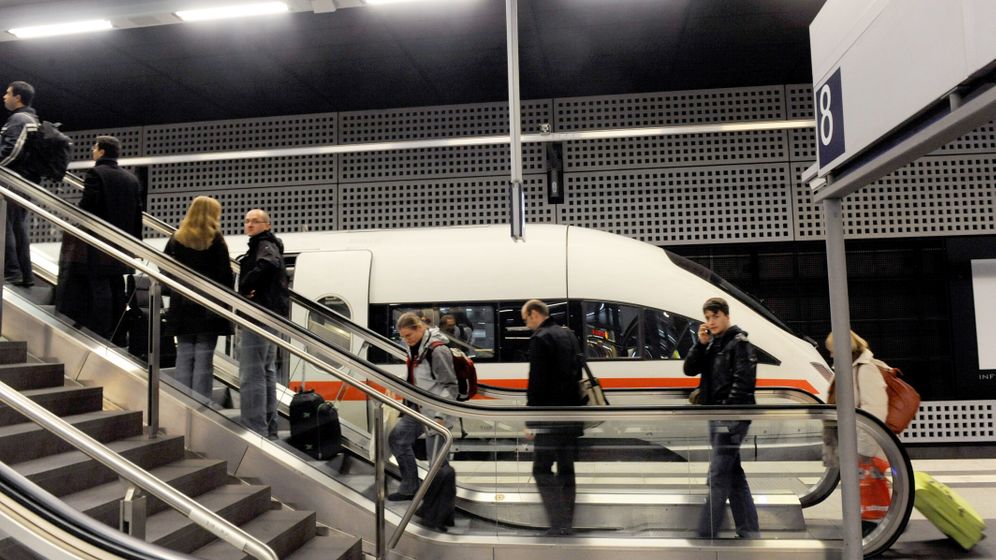 The "unconventional explosive and incendiary device," as investigators described it, was hidden in a cable duct next to the track bed at rail kilometer 24.6 between the stations of Brieselang and Finkenkrug in Brandenburg, the large eastern German state surrounding Berlin. Last Monday, the device went off at approximately 3:45 a.m., triggering a massive deployment of investigators, fire personnel and bomb disposal squads from the federal police force.

It turned out to be one of a spate of attacks. Unknown perpetrators planted petrol bombs at a total of nine sites around Berlin's railway network.

Federal prosecutors have launched an investigation into suspected "unconstitutional sabotage." Deutsche Bahn, the national railway operator, has posted a €100,000 ($138,000) reward for information leading to an arrest.

Sixteen of the 18 incendiary devices failed to explode, apparently because the match heads in the ignition mechanism had become damp -- but the incidents nevertheless reignited a heated debate on left-wing violence.

Boris Rhein is the interior minister of Hesse and head of Germany's Interior Ministers' Conference (IMK), a body made up of officials from the interior ministries at the state and federal level. In his view, the people behind the bombs are "irresponsible fanatics and criminals who are taking railway customers hostage and endangering the lives of innocent people." On Thursday, Rhein and his IMK colleagues will hold a conference call to discuss the situation.

In April, the Federal Office for the Protection of the Constitution, Germany's domestic intelligence agency, noted a swift rise in crimes committed by left-wing extremists. A confidential assessment found that, in the first three months of 2011, the number of offenses rose by 39 percent over the same period the previous year to reach 2,042, and that the number of violent acts even rose by 68 percent, to reach 426. Although German intelligence officials say it is too early to talk of a "terrorist dimension," they anticipate further radicalization. Their report concludes that: "The security situation has markedly worsened."

In fact, it only took a few weeks for these predictions to come true. In the early hours of May 23, unknown assailants set off a fire bomb causing significant damage to a cable bridge at the Ostkreuz commuter railway station, Berlin's major eastern hub. The attack paralyzed signaling equipment and brought railway traffic in the capital city to a standstill and, worryingly, marked a new level of technical sophistication.

The Ostkreuz firebomb also marked a change in how the perpetrators justified their actions. In a letter claiming responsibility, the arsonists mixed philosophical arguments with run-of-the-mill Marxist critiques of capitalism. They said they wanted to target "mobility" in the sprawling city in order to sabotage the "destructive grind" of a "murderous normality" of "working, consuming and slaving away."

Far-left violence is certainly nothing new to Germany. From the 1970s until 1998, the left-wing extremist terror group the Red Army Faction (RAF) killed 34 people and injured scores more in bomb attacks and assassinations. But while the RAF targeted individuals representing the state, including senior civil servants and corporate executives, the new far-left militants have put the infrastructure of a globalized society in their sights.

Law-enforcement officials suspect there might be a connection between the attack in May and the most recent arson attacks. In fact, the statement claiming responsibility for them, which was posted online last Monday, bears a striking resemblance to one released after the Ostkreuz attack in May. Both texts adopt a wordy style, more akin to a newspaper culture report than an extemist flyer.

The wording contrasts with the pedantic prose that German left-wing extremists have favored until now. The letter says "the city holds its breath, slows its pace and perhaps even come to a halt." Likewise, it claims that the attacks have "to a modest extent switched the metropolis into pause mode."

The group claiming responsibility for the attack identified itself as the "Hekla Reception Committee -- Initiative for More Societal Eruptions," with Hekla being the name of an Icelandic volcano. Such a name sounds more like the anarchist artist groups of the 1960s than political criminals of the Internet era.

Another new aspect is the perpetrators' admission of self doubt. While musing about "slowing things down," they admit that others might perceive their actions "as the work of terrorist idiots," but they argue that the train line attacks are not aimed at "generating widespread approval of the destruction of everyday life."

A 'Turning Point in Left-Wing Extremism'

This kind of dialectic evidently takes some cues from a polemic pamphlet, "The Coming Insurrection," which gained cult status among many in the European left after its 2007 release. The 89-page pamphlet originated in France. Its authors, who hide behind the pseudonym of "the Invisible Committee," use grim but precise and in parts almost poetic language to depict a social system incapable of reform.

The manifesto -- which Germany's center-left daily Süddeutsche Zeitung labeled an "aesthetic of resistance for the new millennium" -- occasionally reads like an intellectual instruction manual for the most recent arson attacks. The best way to fight the capitalist society, the manifesto says, is by paralyzing its infrastructure. "Nowadays," the manifesto's authors conclude, "sabotaging the social machine with any real effect involves re-appropriating and reinventing ways of interrupting its networks."

That means that not only trains, but telecommunications and computer networks, the electricity supply and highways are potential targets for militant activists.

According to a confidential report by German domestic intelligence officials, 2007-- the same year in which "The Coming Insurrection" appeared -- marked a "turning point in the development of German left-wing extremism." In particular, the report says that protests against the G-8 summit in Heiligendamm triggered an escalation in left-wing violence. It also notes that left-wing militants have succeeded in attracting support from young people who had hitherto been outside the core left-wing scene.

Hardcore Extremists Said To Be Young and Male

Hardcore left-wing extremists primarily display two sociological traits: age and gender. Indeed, an evaluation of the personal details of 767 individuals, found in a recently compiled dossier of the Office for the Protection of the Constitution labeled "Violence-Prone Left-Wing Extremists," reports that 65 percent of all active left-wing militants are younger than 26 and that up to 84 percent of them are male.

These days, the left-wing scene has even become confident enough to openly discuss its clandestine actions. For example, at a "congress for autonomous policies" held in June in the western city of Cologne, participants admitted to "practicing and executing … liberating" violence. One of the items on the agenda for discussion at the meeting also read: "Militancy -- We Stand By It."

The purported railway attackers saw it necessary to release a second statement last Thursday. They appeared to have been startled by the almost knee-jerk way in which a terrorism debate broke out in Germany's media. The daily tabloid Bild, for example, ran a headline asking: "Is a New RAF Threatening Us Now?"

In the statement, the group stressed that it had not intended to endanger anyone's life. It also added that any railway expert would confirm that cable fires cannot "lead to derailments or the like."

In fact, Gerd Neubeck, Deutsche Bahn's head of corporate security, explained that in the case of damage "all signals would turn red and all traffic would be stopped." Still, investigators warn that some trains would need up to 1.5 kilometers or nealry 5,000 feet to come to a complete stop, potentially putting them at risk.