Berlin is staging a massive public festival on Monday to celebrate the 20th anniversary of the fall of the Berlin Wall on November 9, 1989, the event that heralded the end of communism in Europe and the unification of Germany.

But November 9 is also the 71st anniversary of Reichskristallnacht, a nationwide Nazi pogrom against Jews in 1938. Two other historical events fell on that date in 1918 and 1923 respectively -- the German Revolution that removed the monarchy, and a failed coup attempt by Adolf Hitler in 1923 known as the Beer Hall Putsch.

SPIEGEL ONLINE has taken a closer look at these three events.

It was 71 years before the fall of the Berlin Wall when November 9 first attained significance in German history. It was on that day in 1918 that the monarchy came to an end in Berlin.

The end had been a long time in coming. The German army had all but lost World War I. Indeed, Emperor Wilhelm II knew in August that the situation was largely hopeless and that his own position was in danger.

Nevertheless, his own military vowed to fight on. Even as peace negotiations were under way, the German Imperial Naval Command hatched a plan to fight one last battle against the British navy in the English Channel. The sailors, battleweary and eager to get home, staged a mutiny. Some disobeyed orders to weigh anchor while others committed sabotage.

In the course of just a few weeks, the mutiny grew into a country-wide revolution, spreading to all coastal cities and elsewhere. In Munich, revolutionaries deposed King Ludwig III, the king of Bavaria, on Nov. 7, making him the first royal victim of the revolt. On the afternoon of Nov. 9, Philipp Scheidemann, deputy chairman of the Social Democrats, stepped out onto a balcony of the Reichstag parliament building in Berlin and called out the establishment of the republic, an announcement that set tens of thousands of demonstrators into a frenzy.

But he wasn't the only one to proclaim revolution. A later uprising by the communists two months later, in January 1919, was crushed. Karl Liebknecht, leader of the left-wing socialist Spartakusbund, and his political ally Rosa Luxemburg were murdered. When the dust cleared, Germany founded the Weimar Republic, the democracy ultimately brought to an end by Adolf Hitler.

Many in Germany were never particularly taken with the post-World War I system of democracy known as the Weimar Republic. Furthermore, the Treaty of Versailles, which imposed massive war reparations obligations on the infant state, provided fodder to all manner of radical groups claiming that the Weimar Republic was nothing less than a treasonous regime installed by the war victors.

Adolf Hitler's Nazi party was one of those groups. The party got its start in 1919 in Munich and, once Hitler joined, grew quickly to provide a political home for Bavaria's myriad disillusioned nationalists. In addition to virulent anti-Semitism, Hitler's message -- proclaimed at dozens of meetings in beer halls in the early 1920s -- included a withering critique of the Treaty of Versailles and, by extension, of the Weimar Republic.

By the fall of 1923, revolution was in the air in Bavaria and Hitler was feeling strong. By early November, he was actively seeking to unite all Bavarian right wing groups under his leadership, but was concerned that he was being outflanked. He got wind of a Nov. 8 speech to be held by Gustav Ritter von Kahr, the state commissioner of Bavaria at the Bürgerbräu beer hall -- and he immediately jumped to the conclusion that von Kahr was planning on starting a revolution of his own.

Quickly, Hitler made plans to pre-empt the presumed revolution, and on the evening of Nov. 8, had the beer hall surrounded with hundreds of armed SA men. Hitler stormed into the packed beer hall, fired his revolver into the roof and proclaimed a putsch against the Weimar Republic, ultimately planning to march on Berlin and overthrow the government.

But it didn't work. Hitler had been banking on the Bavarian military immediately throwing its support behind him. Instead, when his henchmen Ernst Röhm and Hermann Esser began storming army barracks in the city concurrently with Hitler's storming of the beer hall, they encountered armed resistance. The putsch rapidly lost momentum until Hitler, having spent the night in the beer hall, elected to go for broke on the morning of Nov. 9. He and 2,000 followers straggled out of the hall and began marching through the city, swastika flags flying.

They didn't get far. Just north of the city center, the marching Nazis encountered a police barricade and shots were fired. In the ensuing shootout, 14 Nazis lost their lives with two others killed elsewhere in the city. Hitler, injured while throwing himself to the ground to avoid the bullets, escaped, but was arrested just days later. He was ultimately tried and convicted for his role in the putsch attempt, but received an astoundingly lenient sentence as was out of jail just a year later.

The pogrom grew out of Third Reich policies aimed at compelling Jews to leave Germany and at limiting their role in German society. Three years prior to the Night of the Broken Glass, the Nazis announced the so-called Nuremberg Laws, a list of edicts that essentially stripped German's 500,000 Jews of citizenship rights. Boycotts of Jewish shops, organized by Hitler's paramilitary force, the SA, had likewise become commonplace in the mid-1930s.

On October 28, 1938, Hitler expelled over 12,000 Polish-born Jews from Germany, as part of a new policy requiring all foreigners to renew their residence permits. Those affected had just one night to pack up and board trains to the Polish border. Polish border guards, though, refused to grant them entry into Poland and sent them back to Germany. For days, the group was stuck between borders, left without food, water or shelter.

A Box of Bullets

But it was a shooting in Paris that provided the most immediate trigger for the Night of the Broken Glass. On Nov. 7, 1938, Herschhel Grynszpan, a German-born Polish Jew, walked into the German embassy and shot diplomat Ernst vom Rath three times. The diplomat died two days later.

The Grynszpan family were among the Polish Jews stuck between the German-Polish border. The family had settled in Hanover after it immigrated to Germany in 1911. Berta Grynszpan, the daughter of Sendel and Rivka Grynszpan, sent a postcard on November 3 to her brother Herschel, who was living in Paris with an uncle, asking for help. "No one told us what was going on, but we realized this was going to be the end.... We haven't a penny. Could you send us something?" the postcard read.

Herschel Grynszpan received the letter on November 7th. That same Monday, he purchased a revolver and a box of bullets.

The Führer received word of Vom Rath's death on the evening of Nov. 9 in Munich, where he was celebrating the anniversary of the 1923 Beer Hall Putsch, the Nazis' first attempt to take over power in Germany. Immediately, he gave orders interpreted to mean that the SA should organize countrywide "demonstrations." Anti-Semitic violence, of course, was the desired outcome.

Throughout the night, the SA, Nazi party members and members of the Hitler Youth destroyed Jewish property and businesses using sledgehammers and axes. The rioters also destroyed Jewish homes and dozens were killed. In total, the storefronts of approximately 7,500 Jewish stores and businesses were destroyed. More than 200 synagogues went up in flames. Some 30,000 Jews were arrested that night and taken to concentration camps at Dachau, Buchenwald and Sachsenhausen with 2,000 losing their lives in the camps before they were released three months later. 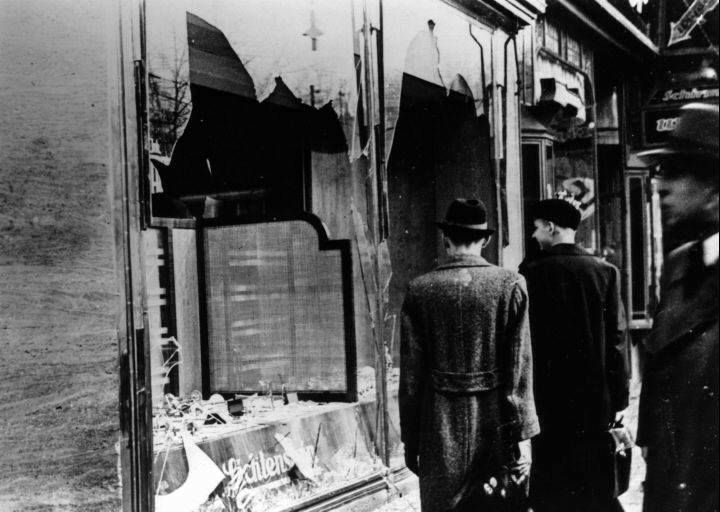 Broken windows of a Jewish shop on the morning after a Nazi pogrom on Nov 9, 1938.