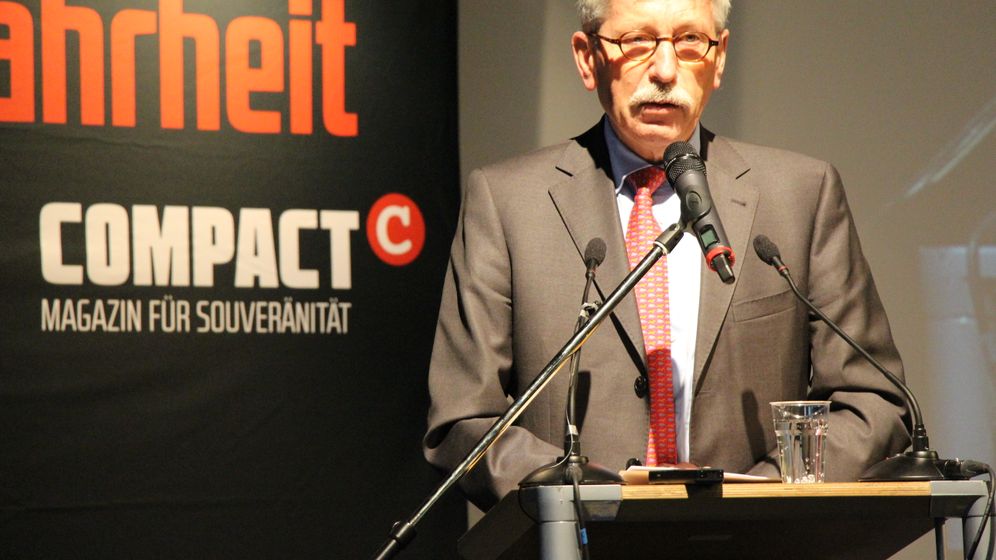 At least the beginning of the "For the Future of the Family" conference offered a spectacle: For several minutes, a mighty drumming sound echoed through the conference hall. Dozens of demonstrators banged against the walls of the building in Schkeuditz, a small town located near Leipzig. "Your idea of family makes us want to puke," read placards held up by young leftist protesters.

In the run-up to it, the event attracted significant controversy, in no small part due to the second half of the title to Saturday's program: "Are Europe's peoples being abolished?" German Middle East expert Peter Scholl-Latour and former news anchor Eva Herman -- who gained notoriety in Germany and was fired from her job at a public broadcaster several years ago for making favorable remarks about family values during the Third Reich -- had both been scheduled to attend. But both withdrew at short notice, Scholl-Latour citing scheduling issues while Herman said she was doing so out of fear for her family's safety and "because I don't want to expose myself to media mud-slinging."

Herman instead addressed conference participants with a pre-recorded audio message. "Family policy in Germany nowadays is scarcely distinguishable from the East German model," she said. While Herman's views are well-known, they pale in comparison with the conference's other speakers. Another last-minute cancellation came from Frauke Petry, spokesperson for the new euroskeptic Alternative for Germany party. Presumably party strategists had decided that the Alternative's mantra-like promise to not enter into coalition with right-wing populists in the European Parliament would sound hollow if Petry participated in a conference that played host to crude theorizing about issues as diverse as demography, heredity, the evils of day care centers or youth they claim can become gay as a result of homosexual proganda.

Several speakers from Russia took part in the Leipzig conference, sparing no effort to promote President Vladimir Putin's family policies. Among them was lawmaker Yelena Mizulina, chair of the Duma Committee on Family, Women and Childrens' Affairs and co-author of the country's infamous law banning "homosexual propaganda.

Mizulina told the audience how she'd been kicked by demonstrators on arrival at the convention center and that she planned to press charges. "These people are intolerant, aggressive and well organized," she complained. "This shows that ineffective gay activists are a thing of the past," she continued.

'A Platform for Her Nonsense in Germany'

Mizulina's family policy wish list is a long one: Among the legislative initiatives she'd like to pursue are a tax on divorce, recommendations for married couples to have at least three children and a ban on emergency contraceptive pills. Mizulina denied claims that her country's gay community is subjected to violence while standing in front of a wall with the inscription "Courage to speak truth."

"She's getting a platform for her nonsense in Germany -- and people even take her seriously," criticized Berlin-based gay rights activist Wanja Kilber, whose organization Quarteera works with gays in Germany who have fled Russia. Kilber is convinced that the aim of Mizulina's visit is to make Russian-style homophobia socially acceptable in Europe.

Rushing in front of the stage, his hands painted red and a rainbow flag in his hands, Kilber disrupted Mizulina's speech shouting, "Mizulina has blood on her hands, the blood of gay and trans youths' who were killed or committed suicide." Duma lawmaker Mizulina continued her speech, apparently unconcerned while Kilber was escorted out of the room.

The conference was organized by Jürgen Elsässer, editor-in-chief of the right-wing populist magazine Compact and himself a former West German communist back in the 1970s. He later became a teacher while continuing to write for German left-wing publications like Konkret and Freitag. His politics have since shifted to right-wing populism and conspiracy theories, and he has a penchant for preaching about family values and Europe's supposed imminent decline. Elsässer's partner in France is Paris' Institute for Democracy and Cooperation, a think tank sponsored by private individuals from Russia that is considered to be closely aligned with the Kremlin.

Mizulina was assisted by her platinum blonde deputy Olga Batalina, a member of the Putin's ruling United Russia party. Batalina made it clear that foreign meddling in her country's internal debates on gays or the ban on adoptions of Russian children by foreigners was not welcome. "We respect all countries, but in Russia we will stand up for and protect our own interests," she said. Mizulina added that problems between minorities and majorities exist everywhere and that they should be solved in such a way as to ensure that, "the country doesn't disappear from the world map."

Expectations that SPD politician and former German central bank board member Thilo Sarrazin, author of the bestselling, anti-Muslim immigrant book "Germany Is Abolishing Itself" would cause a sensation were disappointed. Sarrazin was more occupied with himself and promoting his books. He went on to discuss "the Arabs," "the Chinese" or "the Turks" and his oft-expounded theories about the heredity of intelligence, deficient integration of Muslim immigrants and his view that immigration is "more of a burden than it is useful."

"No immigrant should receive state aid during that person's first 10 years in Germany -- not even welfare aid. Nothing," he told the crowd. Sarrazin's demand was met by applause in the audience while the assembled journalists looked on agog. When asked by SPIEGEL ONLINE whether he agreed with Mizulina's theory that children can be turned gay by propaganda, he replied that he thought that sexual orientation was congenital. Asked whether Germany also needed a law banning "gay propaganda," Sarrazin chose to remain silent.