Just a few short months ago, the Free Democratic Party's insistence on pushing through tax cuts -- even as Germany's deficit rose quickly as the country responded to the global economic crisis -- contributed substantially to a worsening of relations with Chancellor Angela Merkel's conservatives in her governing coalition. Now, though, with the German economy moving ahead at full steam and tax revenues rising, the issue is back on the table. And this time it looks like the FDP's wish of tax relief could soon come true.

"The German government will approve tax cuts for people with low and medium-sized incomes within this legislature period," Merkel's spokesman, Steffen Seibert, said on Thursday. "It goes without saying that the kind of reductions we are able to provide to people will be contingent on budget developments." Seibert played down speculation of a swift move on tax cuts, saying there was no way they would be agreed by January. It is more likely that any tax breaks would come closer to the next German federal election in the fall of 2013.

Still, the wind certainly seems to be blowing in the right direction for tax cuts. The German economy is buzzing after emerging from the crisis, faring better than most other European nations. Compared to the same period last year, government tax revenues are up by around €18 billion, with much of that coming from full-time permanent employees.

Tax Cuts of up to €10 Billion Per Year

The tax cuts currently being discussed could be worth up to €10 billion ($14.25 billion) annually.

Speaking to SPIEGEL ONLINE, Merkel ally and the head of the Christian Democrats' parliamentary group, Volker Kauder, said the economic situation is strong enough that tax relief would be possible. He also called for a reduction in social insurance premiums, like payments into the state health insurance and pension schemes as an additional way of reducing the burden on average Germans. However, he added, "budget consolidation is the priority."

For the beleaguered FDP, a tax break could be a windfall, giving the party a desperately needed boost in the polls. The party's former chief, Foreign Minister Guido Westerwelle, recently resigned as FDP chairman due to his lack of popularity and strife within the coalition, not in small part due to the obstinate manner in which he insisted on tax breaks. Critics have long accused his party of big-business, clientele politics. And under his leadership, the FDP fell to as low as 4 percent in the polls. Even now, around a month after his departure and replacement by Economics Minister Philipp Rösler, the party is hardly faring any better, hovering at between 4 and 5 percent.

'The People also Have a Right to Profit'

In an interview with SPIEGEL published this week, Rösler, who is now Economics Minister and Merkel's vice chancellor, renewed his calls for tax relief. "For months now, the current economic data has been revised upwards," he said. "That's why we now have a different situation than we did at the start of the year. We can do both things at the same time -- bring our budget in line and reduce the burden on the people. In addition to companies, workers also contributed to the upswing. The people also have a right to profit from it."

Rösler said the government needed to quickly agree to a package of tax cuts to be passed before the next election. For the FDP, he said, the priorities are clear: "This is mostly about middle and lower incomes." Merkel's conservatives and the FDP are expected to address the issue at a summit before parliament's summer recess, and this time they are expected to discuss a concrete deal.

Finding agreement on the once divisive issue also has the potential to breathe new life into a government coalition that has limped along over the past two years as relations soured over the FDP's apparent obsession with tax cuts. Weak on the national political level, the FDP has been losing support fast -- even that of top executives in Germany, once strong party loyalists. The FDP had campaigned in 2009 on the issue of tax breaks and they were agreed to in the party's coalition agreement with Merkel, but the plans were put on ice because of the crisis.

"We support the FDP," said Bavarian state Finance Minister Georg Fahrenschon, whose Christian Social Union (CSU), shares power in government as the Bavarian sister party to Merkel's Christian Democratic Union (CDU). The minister added that tax cuts would now be possible without putting at risk budget consolidation and austerity measures put in place by the German government in response to the debt crisis. He said it might even be necessary in order to win the support of voters for stringent austerity measures in government spending.

Lower-level experts in the coalition government are already dusting off old tax cut proposals and comparing them to current economic and tax data. Still, it will be a difficult undertaking, and not only because of the billions Germany may have to contribute to yet another bailout of Greece. Merkel's nuclear energy phase-out will also be costly, with some predicting a related budget shortfall of €2 billion for 2012 alone. Another hurdle is the fact that Germany's balanced budget law, which requires the government to virtually eliminate its structural deficit, goes into effect in 2016.

And considerable opposition to the tax cut proposal remains in some quarters of Merkel's conservatives. Norbert Barthle, the spokesman on budget issues in the CDU/CSU parliamentary group said the priorities are clearly stated in the government coalition agreement: budget consolidation and balanced budgets. And Michael Kretschmer, the deputy floor leader for the Christian Democrats told the Kölner Stadt-Anzeiger newspaper earlier this week that, in a time of economic growth, Germany should be "using the money to pay off the national deficit."

'No Majority for Government's Plans'

The plans could also face hurdles in Germany's second legislative chamber, the Bundesrat, which represents the interests of the federal states and also has power of co-determination on a number of laws, including any planned tax cuts. Many German states are cash strapped and have already expressed opposition to reducing taxes. Politicians in the powerful southern state of Baden-Württemburg, which is home to such powerhouse industry giants as Daimler and Bosch, have alreay expressed their opposition.

"There will be no majority in the Bundesrat for the government's plans," warned the state's economics and finance minister, Nils Schmid of the center-left Social Democratic Party. The politician said the proposal was little more than an effort to resuscitate the ailing FDP. Any surplus money, he said, was needed to consolidate budgets.

The SPD's budget pointman in parliament also warned against cuts. "We are experiencing an upswing, but we are still borrowing money, so we shouldn't be talking abut tax cuts," Carsten Schneider told the financial daily Handelsblatt. He also stated that Germany's new debt brake balanced budget law also requires that the government build up reserves during prosperous times in order to provide relief during crises. 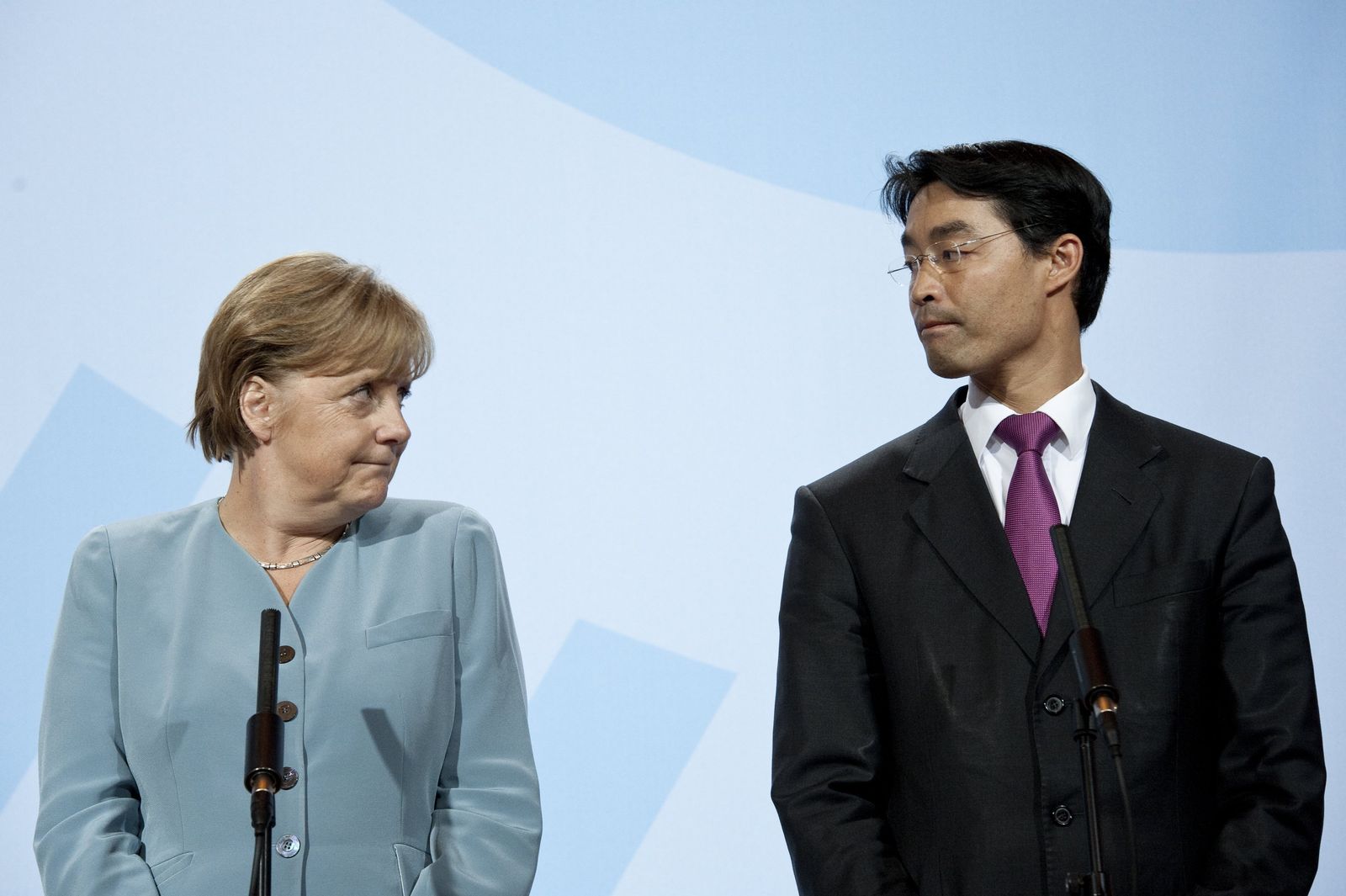 German Chancellor Angela Merkel may soon give a boost to her junior coalition partner, the Free Democrats led by Phillip Rösler (left).