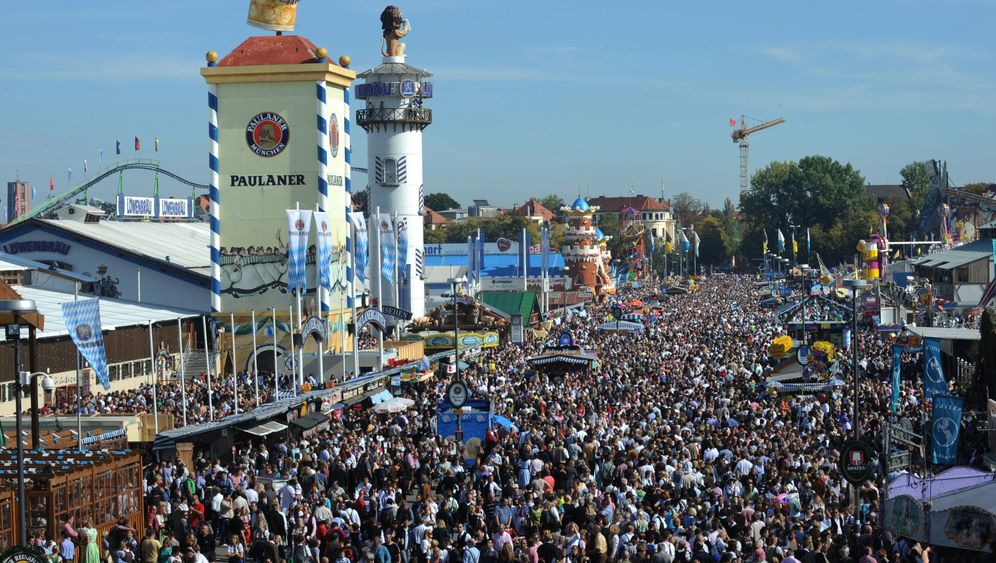 When the annual Oktoberfest ends and the last Lederhosen-clad drinkers have staggered home, the city of Munich always presents a startling set of statistics for beer, sausage and oxen consumption that reminds the world of the gargantuan scale of this spectacular celebration of Bavarian culture.

This year, the two-week festival, which ended on Monday, attracted some 6.9 million visitors, half a million more than last year, who drank an all-time record of 7.5 million liters of beer, encouraged by the sunny weather that blessed the final week. Celebrity visitors included Argentinian football hero Maradona, dressed not in Lederhosen but in a gray suit and large sunglasses.

But the list of lost items always makes for the most entertaining reading. The baffling array of property left behind each year gives a sense of the raucous partying that goes on in the tents.

One set of dentures was also handed in, the festival office reported, down from previous years. "I think the adhesive has improved so the false teeth don't come out when people are chewing meat," Charles Reinbold, who has worked at the Oktoberfest lost property office for almost 20 years, told SPIEGEL ONLINE.

"The year I started," he said, "I remember we had five or six sets of false teeth in, and a pensioner walked in and tried them all on. Unfortunately, his weren't among them."

Reinbold has been hugged by drunken Australians overjoyed at finding their plane ticket back home, he has learned how to calm down emotional Italians who have lost their passports, and he can deal with paralytic revellers incapable of understanding the meaning of his words. "I explain everything three times and if they don't get it, I tell them to come back the next day when they've sobered up," he said. "Sometimes one has to call security to escort them out."

The process of reclaiming one's mobile phone is so complicated that your average owner would have trouble doing so even when sober. "We always ask the owner to tell us the serial number of the phone. You have to open the back of it and it's printed there. That's how we register them."

Predictably, high-end smartphones or Gucci accessories are less likely to be handed in than, say, the live rabbit found last year. Musical instruments are frequently found at the start of the Oktoberfest when the Bavarian marching bands stage their ceremonial processions and then flock to the tents thirsty for beer. "They get drunk and when they get home that night they say where the hell's my trumpet?" said Reinbold.

The items that don't get claimed are cleaned up and sold at auction after six months. The proceeds are donated to charity.

Many wedding rings go missing too, possibly because they are hastily removed during extramarital flirting sessions. Reinbold handles such cases with the necessary tact. "When people come looking for theirs, we sometimes ask, 'did you lose your spouse too'?" he said with a laugh. "Pretty strange things happen at the Oktoberfest, we stay out of it."

The number of children lost increased to 48 from 37 this year. The theft of the heavy one-liter glasses taken as illicit souvenirs surged, with security staff at the exits managing to retrieve an impressive total of 226,000 mugs hidden in revellers' backpacks, up from 130,000 last year.

The number of brawls in which beer glasses were used as weapons -- the Germans, as usual, have a single word to describe the phenomenon with Teutonic precision, Masskrugschlägerei -- fell by four to 58, police said. In six cases, women were among the brawlers.

Police were called out to 2,175 incidents, down slightly from 2,253 last year -- a surprising fact given the higher beer consumption. There were 379 cases of bodily harm and 479 cases of theft. A total of 487 arrests were made. All in all, it was a "normal Oktoberfest," police said.

Reinbold, who turns 61 this month, has two years to go before he retires, and he seems to be looking forward to the day when he will be able to enjoy the delights of the Oktoberfest himself. "The job is totally fun, but it's also a lot of stress, especially at night when the people coming in are increasingly drunk. They open their mouths and you get hit with a stench of beer or Schnapps, euurrrgh."