Twenty-five years ago, on April 26, 1986, Reactor No. 4 at the Chernobyl nuclear power plant exploded. More than a month ago, following a severe earthquake and a devastating tsunami, there was a nuclear disaster in Fukushima, Japan. That second disaster has now joined Chernobyl in being categorized as a "major accident," the highest category on the international scale used to assess the severity of nuclear events. Both disasters mark historic turning points.

A quarter century ago, the images of the cracked reactor, eerie ghost towns and the radiation victims and their suffering were burned into the collective memory of the global public. Chernobyl became a warning sign of the nuclear age. As a result of that disaster, environmental policy went from being a marginal concern to a central political issue. After Chernobyl, all Western governments expanded their efforts to protect the environment. The then German government of Chancellor Helmut Kohl reacted directly to the disaster by establishing the Federal Ministry of the Environment. One year later, environmental policy became an official sphere of activity for the European Union. Since then, the environmental movement in society has gained more and more political clout. Environmental policy is now a core political issue in the minds of a broad public, an issue that, as we have just seen in Baden-Württemberg, can play a central role in deciding elections.

Today, 25 years after Chernobyl, the Fukushima disaster signifies a new turning point. Although we have learned from Chernobyl, we haven't learned enough. The residual risk is still underestimated, because human error was seen as the primary cause of the accident at Chernobyl. Although this was not incorrect, in focusing on human error we underestimated the power of nature.

This even holds true for a nation like Japan, which is not only technologically advanced but also has substantial experience with earthquakes and giant waves. We must reevaluate our relationship with the risks posed by the elements, and we must rethink our understanding of safety. The fact that there have been three serious reactor accidents in three decades -- in Harrisburg in 1979, in Chernobyl in 1986 and now in Fukushima -- leads to the conclusion that although nuclear energy may seem to be a cheap source of energy in the short term, its costs are high when disaster strikes.

This is particularly true of the humanitarian consequences. The immense suffering Chernobyl inflicted on people can still be felt today. Children, in particular, have suffered greatly from the consequences of the reactor disaster. It is also possible that children who have not even been born yet will suffer in the future. No economic goal is worth fundamentally endangering the wellbeing of people who are alive today and of future generations.

And anyone who touts the profitability of nuclear energy must consider this: In the event of a serious accident, the environmental and economic costs of nuclear energy are so high that the risks involved in the use of nuclear energy must be reassessed. The area within a 30-kilometer (19-mile) radius of the Chernobyl reactor is still off-limits today. Large areas are still contaminated. It is worth noting that no insurance company in the world is willing to cover these risks.

Governments and, therefore, the general taxpaying public, bear these massive costs -- and do so across national borders. For many years, the G-7 nations, the EU and other countries have participated in the technical aspects of containing the Chernobyl accident. At the recent donor conference in Kiev, the German government pledged to contribute up to €42.4 million ($61.5 million) for the next few years, in addition to the money it has already paid.

The costs of the reactor accident in Fukushima will also be substantial, and they will burden the Japanese economy for years, if not decades. These economic costs will be an additional factor leading to a rethink of the nuclear energy. There are already signs that this is happening, especially in Europe. Until recently, it would have been impossible to subject all nuclear power plants within the EU to a European stress test based on a uniform standard, as the European Council, partly in response to pressure from the German government, has just decided. Germany will also push for a new international assessment of the risks of nuclear energy at a special conference in 2012 of the signatory countries of the Convention on Nuclear Safety.

Environmental policy must be safety policy in the 21st century. This means that we must end the economic use of nuclear energy and embark on the path to the age of renewable energy, as called for under the German government's energy concept in the fall of 2010. Now we must take this path more quickly and decisively. The prospects of this happening are good, because there is almost universal, cross-party consensus for it. And, contrary to what some critics are saying, Germany is not going its own way in pursuing this approach. Instead, it is the reasonable and correct path if we are to have a safe and affordable energy supply, one that does not continue to cause global warming and does not exploit natural resources in a way that would be irresponsible to future generations. We must be trailblazers and show that this path is feasible, especially in a highly industrialized country like Germany. If we proceed successfully, others will follow.

It is important to recognize that the path into the age of renewable energy does not mean giving up our high standard of living. On the contrary, it is of central importance to maintaining our standard of living in the future and thus an imperative of forward-looking economic prudence. This is because we are facing an increasingly drastic global scarcity of natural resources like oil or raw materials like copper, as evidenced by the consistent rise in the prices of these commodities. The German economy is more dependent than most on energy imports. For this reason, the energy turnaround is particularly important for safeguarding our industry.

It is also true, however, that we will have to invest a great deal, mostly in renewable energy and, particularly, in wind power on land and offshore, as well as in new high-voltage lines and "electricity highways" from the north to the south, new energy storage technologies, "intelligent electricity grids," better grid management and a real European power grid, so that electricity from renewable energy sources can be transported seamlessly throughout Europe. Other goals include improving energy efficiency by renovating older buildings, for example, and developing new forms of mobility that conserve resources.

There is no golden path into the energy future, one that costs nothing and requires no effort whatsoever. Everyone will have to participate, both industry and households. However, there are two things politicians must take into account. First, energy cannot become a luxury good for a select few. It must be affordable for everyone. Second, the energy-intensive industry in Germany must remain competitive. The key to affordable prices for both industry and consumers is more competition. Renewable forms of energy must stand the test of the marketplace, instead of being subsidized indefinitely. The goal is to achieve an energy policy that makes better use of the role of competition in driving innovation, reducing costs and encouraging the discovery of new technologies. This will contribute in an important way to keeping energy prices stable in the long term, especially as having more renewable energy in our energy mix makes us less dependent on the volatile prices of imported energy.

Overall, the investments in renewable energy will pay off handsomely, both for the economy and society. They present a great opportunity for economic growth and new jobs. They are a necessary contribution to preparing Germany for a successful future as an industrial location, because energy and environmental technologies will create the markets of the future. The global market volume of these technologies already amounts to about €1.7 trillion ($2.5 trillion), a figure that will double in the next 10 years alone. Those who invest in these fields will be the technology leaders and the world's biggest exporters in the future.

Germany must utilize its role as a pioneer in this field. German companies already hold the largest share, or 16 percent, of the global market for environment technology, which amounts to a total volume of €224 billion. Some 1.8 million new jobs have been created in the fields of environmental and energy technology, 370,000 of which are in the renewable energy field alone. Using this growth strategy, we have managed to quadruple the share of renewables in the energy supply in 10 years, to about 17 percent today.

I am convinced that within a generation, especially in a highly industrialized country like Germany, it will be possible to derive the lion's share of the energy supply from renewable energy, and remain a key industrial leader in the process. The prosperity question of the 21st century consists in not seeing the energy turnaround as a threat to the economy, but as an opportunity to accomplish change that makes new, resource-conserving growth possible. Growth and prosperity cannot be attained at the expense of the safety of future generations; instead, they must be attained for those generations. This also includes reevaluating human fallibility and recognizing that we can never completely control nature.

This is why we just rethink safety. This is the lesson to be learned from the horrible events that happened 25 years ago in Chernobyl and this year in Fukushima. This is our responsibility to creation and to the future.

Norbert Röttgen, 45 (CDU), is the German Minister of the Environment, Nature Conservation and Reactor Safety 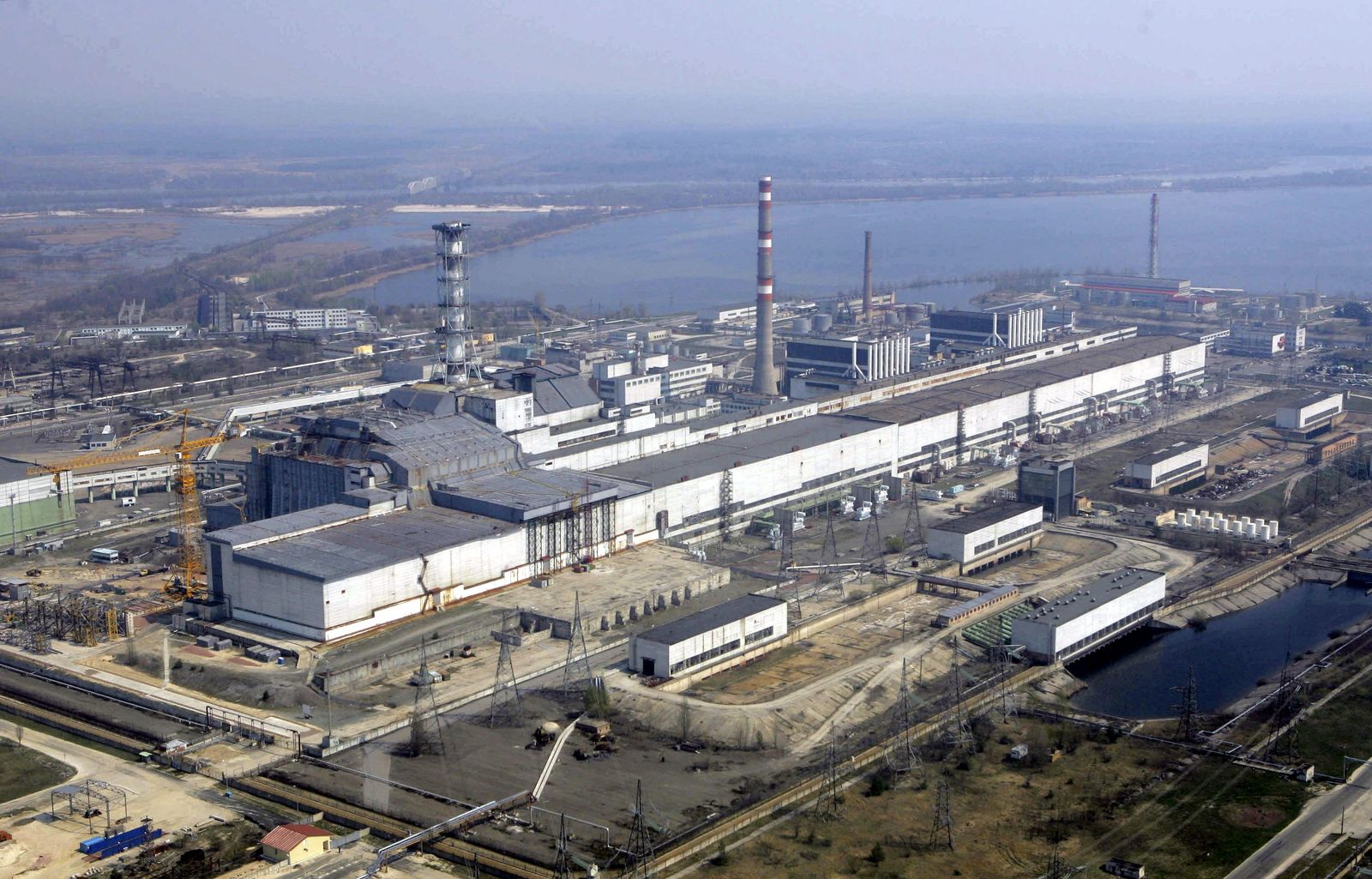 An aerial view of the Chernobyl nuclear power plant (2006 photo).