Julia Klöckner knew it was pointless, but she tried nonetheless. On the evening of the election, the top candidate for the center-right Christian Democratic Union (CDU) in the southwestern German state of Rhineland-Palatinate stood in front of the cameras to propose a dialogue with the Green Party. "The offer stands," she said, arguing that democrats ought to be able to talk to each other. To reinforce her case, she even wrote a letter the next day.

In theory, the Greens could choose Klöckner as the state's next governor. Because of the distribution of votes within the state parliament, the Greens are suddenly strong enough to be kingmakers in the state straddling the Rhine River. In fact, since the pro-business Free Democratic Party (FDP) has been voted out of the parliament, Klöckner has no other minority partner to choose from.

A secret conversation took place on Thursday afternoon in the town of Ingelheim near Mainz. Three people represented each side, and the meeting lasted two hours. Although there was no official comment on the contents, the top candidates revealed how they felt about the meeting on Twitter. "Just had constructive talks with #rlp #Greens @Ingelheim - was very pleasant!" Klöckner wrote. The Green Party candidate, Eveline Lemke, was not as effusive: "Clarification: Talks are not exploratory, nor are these coalition negotiations."

In other words, no matter how much the CDU tries, and even if more "talks" were to follow, there will be no CDU/Green Party coalition in the state capital Mainz. The Greens don't need the CDU to run the government. Sometimes politics can be simple.

For years, many saw promise in an alliance between the CDU and its Bavarian sister party, the Christian Social Union (CSU), on the one hand, and Alliance 90/The Greens, on the other. The hope was that a coalition between former bourgeois politicians and members of the 1970s and '80s activist movement known as Spontis would burst open the calcified fronts of a partisan war between right and left. New majorities would produce new policies. It would all be more experimental, more progressive, somehow fresher.

That dream seemed to come to an end in 2010 when the CDU switched to confrontation mode. The first CDU/Green coalition in a German state, in the city-state of Hamburg, was a failure, partly as a result of an education policy that was too experimental even for its supporters. In the so-called Fall of Decisions, last year, Chancellor Angela Merkel called for an attack on the "Party of Protest," declared alliances with the Greens at the federal level to be "pipe dreams" and laid the groundwork for the greatest provocation possible -- a drastic extension of reactor life spans.

But this strategy on the part of the CDU was a failure in parliamentary elections in the southwestern states of Baden-Württemberg and Rhineland-Palatinate, where confrontation with the CDU proved to be a successful strategy for the relatively small Green Party. Now it is about to appoint the next governor in the Baden-Württemberg capital Stuttgart, and in Mainz the Greens will decide whom they wish to entrust with running the state government.

The CDU/CSU, on the other hand, is in a bind. The election in Baden-Württemberg has made it abundantly clear that the FDP is now in a desolate position. Many in the CDU believe that the party will not be able to hold onto power in national elections in 2013 if it keeps the ailing FDP as its coalition partner. For this reason, the CDU/CSU is beginning a new campaign to court the Green alternative.

Partisan politics is not in the interest of the CDU, and the party should have "as many coalition options as possible," says Environment Minister Norbert Röttgen. One reason he fought to limit extensions of nuclear operating licenses last fall was to avoid spoiling his party's prospects for a future alliance with the Greens. He now sees the CDU's post-Fukushima reversal in energy policy as an opportunity.

Family Minister Kristina Schröder holds a similar view. The young conservative woman from the western state of Hesse, suddenly remembering cozy evenings spent drinking "a glass or two of organic wine" with the Greens, says: "My partiality for the Greens, at least the middle-class wing, is no secret. I share a similar lifestyle and a similar debating culture with many Greens, especially of the younger generation, and we approach problems in similar ways."

There is also growing sympathy for the Greens in the CDU/CSU parliamentary group, until now a stronghold of conservatives. "The liberals are our governing partners at the moment," says CDU/CSU deputy floor leader Günter Krings. "But I think it would be foolish to categorically rule out coalitions with the Greens."

The Green and the Black

There are many in the CDU/CSU who yearn for such an alliance. European Union Energy Commissioner Günther Oettinger sees "an expectation within society that we achieve a consensus on key issues between black (the CDU) and green." Armin Laschet, the CDU parliamentary leader in the western state of North Rhine-Westphalia, says: "I still believe that we can form a coalition with reasonable Greens. And there are many reasonable Greens, both here in North Rhine-Westphalia and in Baden-Württemberg and the Bundestag."

Merkel Says No, But Does She Mean It?

The new situation creates a predicament for Merkel. On the one hand, she doesn't want to cause even greater anxiety to her already stressed coalition partners (the Free Democrats, or FDP) by encouraging talk of a black-green alliance. Besides, the CDU/CSU doesn't want its conservative base to gain the impression that the party chairwoman is running after the Greens. On the other hand, Merkel is aware that the Greens may be critical to her party's success in 2013 elections.

For these reasons, Merkel is pursuing a dual strategy. In public she condemns the idea of an alliance to the realm of speculation. When asked in an interview on Germany's ARD television network last Monday whether a CDU/Green alliance had become more attractive after the recent elections, she said, "As I said a few months ago, at the federal level the idea remains a pipe dream for 2013."

Behind the scenes, however, her people say Merkel is not ruling out a coalition at the national level. According to sources at the Chancellery, if the CDU's only option in 2013 is to join forces with the Greens, it will of course try to form the alliance.

Renate Künast offers an impression of how the Greens feel about such strategies today. In the past the Green Party floor leader in the German parliament, the Bundestag, made no secret of her fondness for the chancellor. She had even commented off the record that she could imagine a CDU/Green Party coalition with Merkel.

Today, Künast seems to be searching for the best words to describe how ridiculous she finds the chancellor. She has likened Merkel to a spinning, lurching top, or a balloon that wasn't tied up properly and is now flying wildly through the air. "Sometimes to the right, sometimes to the left, pfff, pfff," says Künast, describing Merkel and her party. "We don't know what this CDU is or wants."

The Greens view the CDU's maneuvers with condescension. "Our issues became hegemonic a long time ago," says Boris Palmer, the mayor of the southwestern city of Tübingen. "What's new is that now the CDU seems to be getting it."

Following the bitter controversies of the last six months, the Greens are taking a step back to enjoy their triumph. "The CDU is in a strategic panic, because it stands to lose its traditional coalition partner," says Robert Habeck, the Green Party parliamentary leader in the northern state of Schleswig-Holstein. This, he adds, puts the Greens in a position they should not give up without good cause. "We don't choose our partners because we like them, but on the basis of who is willing to satisfy our conditions," says Habeck. "Those who wish to form alliances with us must pay the price."

Fritz Kuhn, the Green Party deputy floor leader in the Bundestag, is even convinced that a rapprochement with the CDU would harm the Greens' interests. "We have captured votes at the center of society. We would jeopardize this position without good cause if we were to upgrade the CDU/CSU once again." Kerstin Andreae, a Green Party member of the Bundestag, also sees little point in opening up to the CDU. "People face a choice between black and green. The SPD is becoming less and less relevant."

The Greens believe the successful campaigns in two southwestern states validate their policies. Apparently their candidates were not perceived as cranks or constant protesters in the dispute over bridges in Rhineland-Palatinate, the Stuttgart train station project and nuclear power plants. The strategy of "vilifying us as the party of protest has failed," says Schleswig-Holstein Green Party politician Habeck.

For the Greens, any rapprochement with the CDU over nuclear power will be critical -- though with varying expectations. Green Party politician Andreae, from Freiburg in southwestern Germany, says, "If there were an alliance with the CDU, it would only be under Green conditions and only with a successor of Mrs. Merkel." Andreae doubts that a rapprochement will occur anytime soon. "But for something like that to be feasible, the coalition would first have to withdraw its nuclear resolutions completely."

Parliamentary leader Künast is skeptical that the coalition has the strength to do so. "I don't think Merkel will choose that route." Röttgen's talk of a change of course is nothing but "green soap bubbles," says Künast. "There's nothing inside and nothing to them."

At least one Green politician is more optimistic. Tübingen Mayor Palmer, long a proponent of the idea of CDU/Green Party alliances, takes the coalition's reversal on nuclear power at face value. According to Palmer, an era of fundamental disagreement over the future of German reactors has ended, and soon the parties will just be arguing over the details. "Suddenly the only insurmountable reason to rule out a CDU/Green alliance is gone." 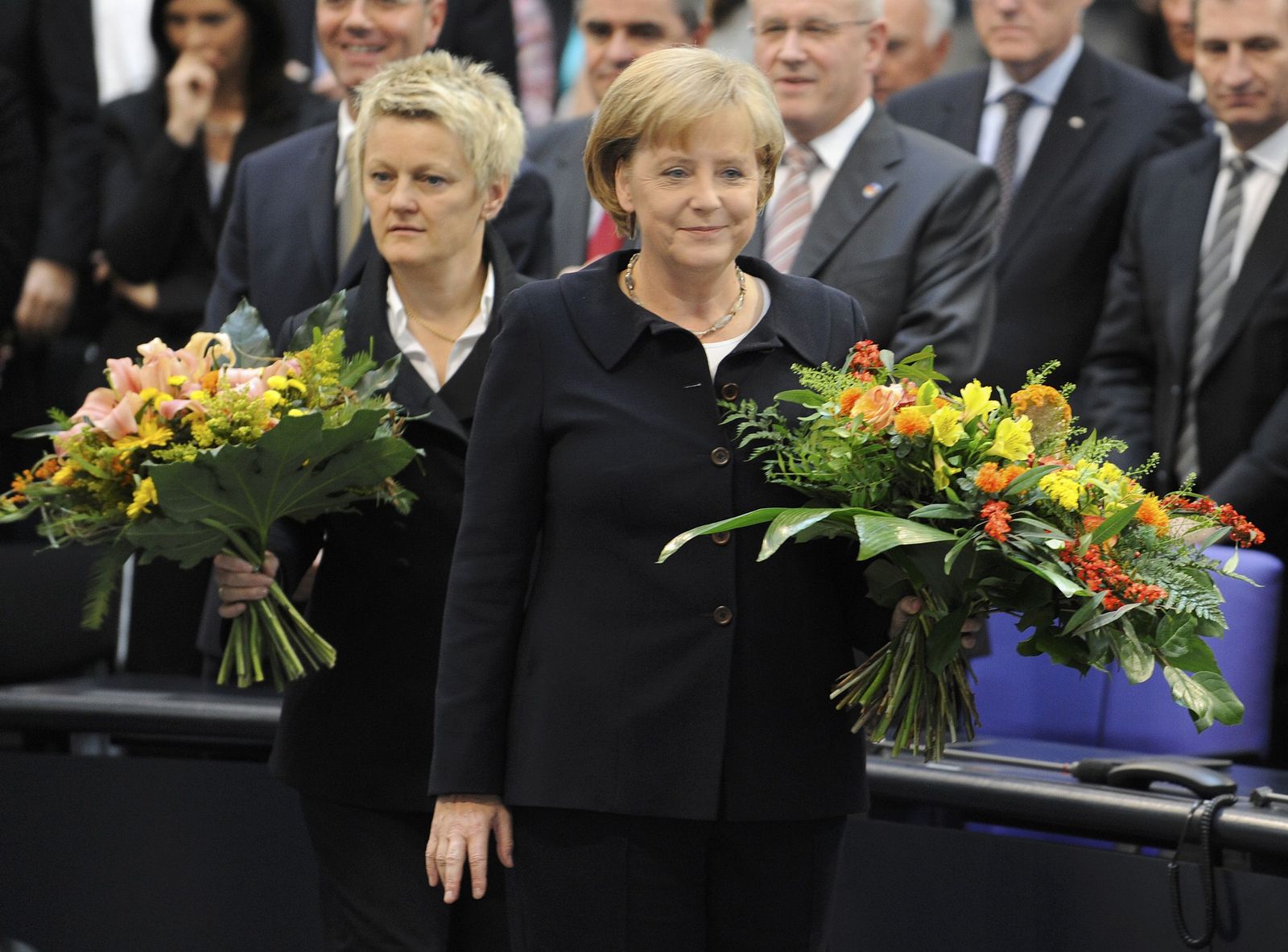