The man was clearly out of his senses. Peter M., 42, was naked and covered with blood as he ran across Munich's Höhenstadter Street. He threw himself on the ground, shouting: "I am God." Then he smeared superglue on his wounds and smashed his head into a window.

Policemen rushed to the scene and sprayed pepper spray into the man's face, but it had no effect. Several officers eventually managed to subdue him. When they finally handcuffed him, Peter M. collapsed. He was taken to a hospital, where he died two days later, on July 5. 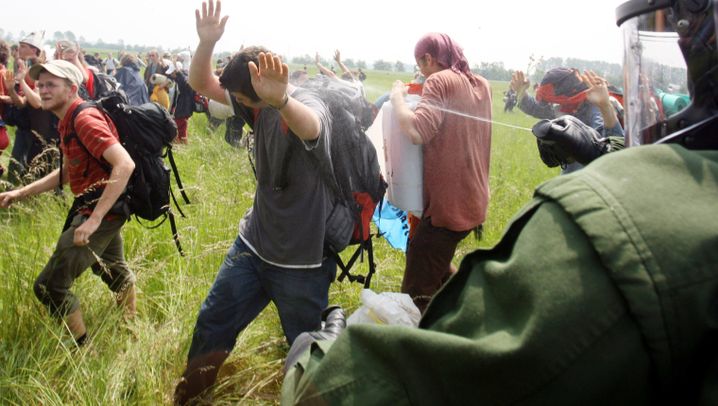 Photo Gallery: Too Hot for Comfort

The autopsy determined that the man had died of restraint-related asphyxia after being handcuffed by police. He had been using cocaine, which also could have caused his death. But pepper spray "played no role in the autopsy result," said Barbara Stockinger, the Munich chief prosecutor assigned to the case. The case, which appeared to have been resolved, was closed.

But the death of Peter M. may not be as straightforward as it appears. The bizarre circumstances aside, his case resembles similar incidents around the world in which people under the influence of drugs get out of control, police use pepper spray to restrain them, and then, "15 to 30 minutes later, they're dead or in a coma," says John Mendelson, a doctor specializing in addiction at the California Medical Center in San Francisco.

The results of a study Mendelson has just completed reinforce a suspicion long held by critics of pepper spray, namely that it can be deadly for people under the influence of illicit or psychotropic drugs.

Mendelson's conclusions are based on experiments with mice in his laboratory. One group of mice was given injections of cocaine and nothing else. The mice in a second group also received a dose of capsaicin, an extract from the chili pepper.

When the researchers checked the cages again after 24 hours, only a few of the mice that had been given cocaine were dead. But more than half of those injected with the cocaine-chili blend were no longer alive. It appears that, at least in the case of mice, "capsaicin has a tendency to make smaller doses of cocaine fatal," Mendelson says.

In the 1960s, postal carriers began using a mixture of cayenne pepper and mineral oil to protect themselves against overly zealous watchdogs. Park rangers in the United States also used pepper spray to ward off intrusive grizzly bears. Police departments around the world began using the irritant in the 1990s.

Capsaicin is 600 times more potent than the spiciest cayenne pepper. Suspended in a mixture of ethanol and water, the substance irritates the eyes and mucous membranes. Pepper spray, effective at distances of about two meters (6.5 feet) and probably more dangerous than tear gas, enables police officers to contain violent individuals without having to use batons or firearms. Most police officers have been wearing pepper spray on their belts for years. "There is nothing available that's more effective," officials with the Berlin police department said after the spray was introduced.

"We recommended it," says Hans Damm, head of the Forensic Science Institute at the German Police University in the northwestern German city of Münster. "Pepper spray was a new thing that came from the United States, and because it was a natural substance, even the Green Party couldn't object."

The dosage is a different matter altogether. Because the chili-based agent is difficult to obtain in pure form, companies often resort to the use of synthetic capsaicin. In addition, people's reactions to the substance vary widely. "In some cases, there isn't that much difference between effective and fatal doses," says Damm.

In the past six months, at least three people in Germany have died after police used pepper spray against them. Two were under the influence of illicit drugs, while the third victim was taking strong prescription sedatives.

In the United States, the American Civil Liberties Union (ACLU) has documented a number of deaths following the use of pepper spray, including 26 fatalities in California alone between 1993 and 1995. Of those cases, 24 of the victims were on drugs and two were mentally ill. Nevertheless, a study by the US Department of Justice concludes that pepper spray was partly responsible for fatalities in only two out of 63 cases studied.

It's true that drug use can be enough by itself to kill a person. But researcher John Mendelson believes that there is an interaction between the chili extract and drugs. He speculates that the nerve receptors that respond to the substance are the same ones that are active when a person is high. According to Mendelson, the documented cases are strikingly similar: "It's almost always people who do crazy things, like running naked through traffic while holding a knife."

The German cases seem to support his theory. On Oct. 31, a 27-year-old drug addict died in Laucha in the eastern state of Saxony-Anhalt. The man, who had taken crystal methamphetamine, ran into the street naked and began smashing the windshields of parked cars with his fist. Then he attacked a female pastor. Police sprayed the man in the face with pepper spray, but there was no reaction.

Finally, four officers overpowered and handcuffed the man. He died a short time later. The autopsy concluded that the cause of death was a drug overdose. German medical examiners are often unaware that "pepper spray could be a factor contributing to death," says Fred Zack, a forensic scientist from Rostock in northern Germany. "We may be entering new territory here." In 2007, Zack performed an autopsy on a heavily inebriated man from Ribnitz-Damgarten in Mecklenburg-Western Pomerania who had died after pepper spray was used on him.

In another case, employees at a nursing home for the mentally ill in Heidhausen, a neighborhood in the western city of Essen, called the police on Aug. 7 to report that a 43-year-old patient, a powerfully built Russian, had threatened the staff. An emergency doctor injected a sedative into the man, but then he jumped out of his bed and attacked people standing nearby. Even with pepper spray, police officers had trouble restraining the man. He died soon afterwards. Four months later, the autopsy results are still inconclusive.

Mendelson believes that both illegal drugs and psychotropic drugs could interact similarly with pepper spray. Ironically, when pepper spray was introduced, authorities touted the substance as being particularly suitable for use against the mentally ill and people under the influence of drugs.

"Pepper spray hardly deters people in delirious states," says Mendelson. He recommends the use of electroshock devices known as Tasers instead. "Under these circumstances, they appear to be safer and more effective."