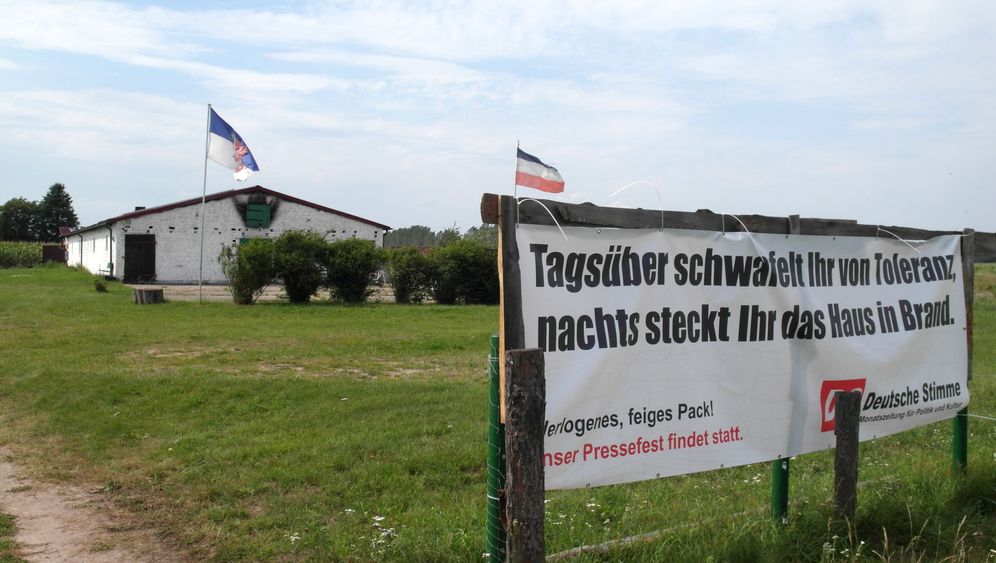 Rainer Dambach has grown a lot more cautious these days. Before pressing through the gate, he looks both ways -- to the neighboring house on the left and to the idyllic alley on the right. Then the mayor makes his way onto the property.

Once inside, he sees a Reich flag flying in the wind, traces of soot on a brick wall and a sign that reads: "In the daytime you babble about tolerance and at night you set the house on fire." It also greets what its maker calls a "phoney, cowardly rabble." The poster is a reference to a recent arson attack on the building.

Dambach says: "They like to play the role of the martyr." He places his hands on his hips and says: "They are the rabble. And I am not afraid of them at all." The tone is raw these days in the town of Pasewalk. Someone tried to set the stable on fire and Dambach, the 60-year-old mayor of the city in the eastern German state of Mecklenberg-Western Pomerania, has been preoccupied by the property for weeks now. The stable is located just a few kilometers away from the center of Pasewalk, a city of 12,000 which has achieved some international notoriety for being the place where Adolf Hitler was recovering from mustard gas injuries when World War I came to an end.

Germany's far right National Democratic Party of Germany (NPD) intends to hold a massive summer party in the farm's former pig stalls. That may sound funny to some, but nobody in Pasewalk is laughing. The so-called "Press Festival" of the NPD newspaper Deutsche Stimme, or German voice, scheduled for this Saturday at a site is one of the biggest events being staged this year by neo-Nazis in Germany. Even if fewer people are expected this time around, organizers attracted some 2,000 right-wing extremists the last time they held it. According to the event's program, major NPD party figures plan to hold speeches and neo-Nazi singers and groups will provide entertainment.

A Hotbed of Neo-Nazi Activity

As uncomfortable and embarrasing as the event may be, the political party behind it is a legal one in Germany. A past attempt to ban the NPD failed despite the fact that Germany's Office for the Protection of the Constitution, the domestic intelligence agency responsible for monitoring extremist activity, has described the party as being "racist, anti-Semitic and revisionist." Politicians continue to debate a possible ban today.

The event in question is itself also partially reflective of the Western Pomerania region, a well-established stronghold of neo-Nazi activity in Germany. The NPD holds seats in the state parliament and so-called Freie Kameradschaften ("free comradeships") -- small, loose-knit groups of right-wing extremists who are not officially organized, but are still often supporters of the NPD -- can be found throughout the region. In the nearby village of Koblentz, population 236, one in three voters cast ballots for the NPD in last year's state election. And even the property where the festival is to be held is owned by a local NPD party branch in nearby Viereck.

Günther Hoffmann, an expert on right-wing extremism in Germany who lives in the nearby city of Anklam, says: "The neo-Nazis believe they have complete control of the area."

But things may be changing -- at least slowly. This time around, local residents aren't willing to allow the NPD to hold its event without putting up a fight. City administrators have used every trick possible to try to prevent the gathering. An anti-NPD alliance has been formed and the group plans to converge on Saturday to create a four-kilometer (2.5 mile) long human chain in protest of the far-right event. Officials with the party, however, are unimpressed, and are continuing to promote what they say will be "our peaceful press festival." Still, Hoffmann says the fresh opposition marks a watershed moment for the community. "This is the first time something approaching broad resistance has materialized," he says. That is due in no small part to the activities of Mayor Dambach.

Dambach is laid back by nature. He wears frameless glasses and jeans and a silver necklace over a black T-shirt. Trained as a landscape planner, he originally comes from southern Germany and first came to the northeast corner of the country after a stint in Berlin. For the past 10 years, he's served as mayor here. When people congratulate him on his term in office, he often answers: "You should also commiserate with me." But Dambach, despite his laconic nature, has had enough.

An arson attack in July on the site of the neo-Nazi festival was only the latest episode to set him off. The singed building won't interfere with the ability of organizers to hold the party, and Dambach even says it is possible the extremists set the fire themselves in order to set the mood. But the NPD itself is blaming "leftist terrorists" and has offered a €8,000 ($9,868) reward for the capture of the perpetrators.

A Mayor Fears for His Towns Reputation

The pig stalls, which are located just inside Pasewalk city limits and are thus under its administration, have been a thorn in the mayor's side for some years. It has served as the site of multiple extremist rock concerts that have been disguised as private birthday parties. "We need to put an end to this for once and for all," he says.

What Dambach fears now is no less than his town's reputation. "If we don't do anything," he says, "then people everywhere will say that Pasewalk is a place where Nazis can celebrate anything they want." And, he warns, vacationers and businesspeople will say there are too many neo-Nazis in the region to make it palatable for business or travel. In a state located on the coast where tourism is an important part of the economy, Dambach believes his city's future at stake.

"We can no longer afford to just look the other way," Dambach says. A few years ago, when the extremists planned to stage a neo-Nazi parade through town, he asked the city council what could be done. The majority told him they would simply ignore it. Others, he says, said "yes, we actually should do something about it," but they didn't take any action. He says anyone who tried to take action against right-wing extremists was usually left feeling completely alone.

He himself has done his part to protest the "press festival." Together with representatives of other agencies, he tried to find problems with the security planning presented by the NPD members, with fire safety or with the lack of access roads in order to stop the event. The effort proved to be in vain. Then Dambach tried to encourage the residents of a neighboring property to lodge a formal complaint about the event disturbing the peace. That was before someone told him the neighbor "was one of them."

Fear 'They Will Key My Car or Kill My Pets'

Of course, not all supporters of the NPD are open about their radical sympathies. At the same time, opponents of the right-wing extremists aren't always keen to show their faces either. Dambach says some local residents oppose the event but are reluctant to go public with their concerns.

One resident agrees to meet with a reporter in a parking lot outside the town. He doesn't want to be seen publicly with someone from out of town. He says he fears that Pasewalk and Viereck might share the same fate as a place like Gorleben in the western German state of Lower-Saxony. Gorleben is the site where Germany's nuclear waste is stored, a toxic reputation for the city. "When it comes to Gorleben, people all say, 'Oh, nuclear waste'." Someday, he fears, they might say: "Viereck? Oh, the Nazis."

The man says he fears retaliation if he goes public with his efforts to oppose the neo-Nazi event. "I'm afraid of the mini-terror," he says, "that they will key my car or kill my pets."

There seem to be three kinds of people in Pasewalk and its surroundings. There are those who say: "Oh, just let the extremists have their party." There are those who want to take discreet action against the neo-Nazis. And then there are people like Dambach who say they will not allow themselves to be intimidated by the Nazis.

Dambach says he is now moving to take more decisive action. He says he is trying to create an alliance against right-wing extremism with other mayors in the region and he also meets weekly with the citizen's group formed to combat right-wing extremism in Pasewalk. Dambach is also a member of the district council with the center-left Social Democratic Party. But the same district council also has six members of the NPD sitting on it. Despite this, Dambach says he has never been intimidated. "Those who always clearly express their opinion," he says, "are not put under pressure."

Now, however, it seems that NPD have begun targeting Dambach. After he posted a notice on city hall's homepage soliciting people to join his alliance against right-wing extremism, he began getting letters. A lawyer for the national leaders of the NPD threatened legal action. In addition, an administrative court in nearby Greifswald ordered the mayor to stop promoting the anti-neo-Nazi alliance. The court ordered that the move had violated the mayor's legal duty to remain neutral to political parties and forbade him from "any assessment" of parties before forcing him to pay €400 in legal fees relating to the court proceedings.

Dambach now finds himself in the tough position of having to find a balance between neutrality as a mayor and the role of being an active citizen who wants to drive back the right-wing extremists. It will be tough, though, given that other activists address him as "Mr. Mayor" at every meeting. When asked how he can reconcile these diverging positions, he responds: "I don't know."

Still, he says he wants to do everything possible between now and Saturday to spoil the neo-Nazi's pig stable festival. "Otherwise this annoyance will start again fresh next year," he says. Dambach says he's ready for a fight and won't give up easily. He wants the days in which the region is a hotbed of neo-Nazi activity to be numbered.