This time the battle against capitalism and oppression has led Ulla Jelpke to Münsterland, in the western German state of North Rhine-Westphalia. Left-wing politician Jelpke always said she wanted to change Germany. And after 16 years in the Bundestag, Germany's federal parliament, she hasn't changed her mind. "I am a Leftist, now and always!" she says.

Jelpke works for the far-left Left Party. The party, which was formed in 2007 after a merger of the successor party to the East German communists, left-wing groups in western Germany and disaffected former SPD voters, has gone through a variety of name changes. It used to be the Socialist Unity Party (SED). Then it was called SED-PDS. Then the Party of Democratic Socialism (PDS). And then the Left Party-PDS. And now? It is simply called the Left Party. And while the party may have changed names, Jelpke has always remained in the same place: Far on the left.

Jelpke is one of the founder members of her party, having helped build up the Left Party in the western German states. In Sunday's federal election, Jelpke is second on the candidate list in North Rhine-Westphalia, which virtually assures her another term in the Bundestag.

In addition to Jelpke, there are a number of other people from the "good old days" whose names are near the top of the Left Party lists. This includes former members of the German Communist Party (DKP), assorted fans of Cuba, South America and Che Guevara as well as people who used to be members of the Greens or the Social Democrats, who have thought that their parties were too accomodating.

It's a strange and interesting mixture of people, a group of individuals who have been trying to change the system for decades without actually coming any closer to that goal and who are just happy to have found a new party now, one that could be a vehicle for their dreams of a better world.

Without these veterans of the revolution, the Left Party would not exist in the West. However from the perspective of the party's leaders in Berlin, this is also the problem. Those building up the party in the west are very different from those doing so in the east and the latter are those who have, so far, largely defined the party's platforms. The classic Left Party functionary from the east is fundamentally conservative. He or she comes from a culture where this party was the dominant one for 40 years and, if it was up to them, it would be so again. Whereas the Left Party member from the west has always been in the minority. That's made them a little bit crazy and a little less able to make compromises.

Two or Even Two and a Half

The cultural battle between the radicals and the moderates is almost impossible to contain. Recent election successes in the eastern state of Thuringia and the western state of Saarland don't even help. Co-leader of Germany's Left Party Gregor Gysi (who leads the party's parliamentary group in the Bundestag and grew up in East Germany) and Oskar Lafontaine (a former governor of Saarland and chairman of the Social Democrats at the national level before he bolted the party) try to sell the Left Party as the solution to all problems as though they were salesmen praising the merits of a wrinkle-free suit. But the fact is, behind the scenes, the two wings of the party are fighting for dominance.

The Left Party is two -- or even two and a half -- parties. There is the pragmatic mainstream party that is in power in the east. That is party number one. Then there is party number two: the splinter party, full of dissenters from other parties, more common in the west. And then there's the Lafontaine Party, in the state of Saarland.

Parties one and two are tangled up in a row as to which of them is actually the Left Party. The western leftists think that the easterners are too careful, cowardly and spoiled through their participation in governments in the eastern states or by their desire to participate. The eastern leftists, on the other hand, think that the westerners are stubborn ideologists -- and even enemies of the German constitution in some of the more radical cases.

From the outside, it almost looks like the Left Party is going from one election success to the next. If there is one lesson learned from the state election results in Thuringia and Saarland earlier this summer, then it's that there's no way to bypass the far-left political group in the long term. But the closer you get to the Left Party, the more it dissolves into a stew of dueling factions. There are so many coalitions, workers' unions and different political currents, that even the party itself sometimes loses its overview. What's the difference between the socialist left and the anti-capitalist left? Ulla Jelpke, an anti-capitalist herself, doesn't know the answer. Perhaps there is none.

She is 58 now but Jelpke isn't giving up. When the Greens became too mainstream in Hamburg in the 1980s, Jelpke left the party. If the Left Party were to go the same way as the Greens did, she wouldn't hesitate to bolt again. When Germany reunified, Jelpke toured through the western part of the country with Gysi and entered the Bundestag with the PDS. She wants to dismantle NATO and wants to nationalize banks and "key industries." Never before has Jelpke felt as close to her goals as she does now.

On a platform at the train station in her hometown of Hamm, a city in North Rhine-Westphalia governed by the conservative Christian Democrats, a man hobbles over to Jelpke and asks her to buy one of his newspapers, a street sheet for the homeless. Jelpke says that she already has one before turning away. Jelpke calls people like that "Hartzies" -- a term for those Germans on the long-term unemployment benefit known as the Hartz IV. Over five million people receive these unemployment benefits and they are a group of voters important to the Left Party, particularly in the west. The party and the "Hartzies" are co-dependent. That is even though radical elements of the party have called for the elimination of the Hartz program -- originally this was a program of reforms developed by former Volkswagen personnel director Peter Hartz and then undertaken by the government of former SPD Chancellor Gerhard Schröder that effectively reduced welfare payments for the long-term jobless.

Sometimes the Hartzies can get on one's nerves. Recently a bunch came to Jelpke's office in Dortmund and made themselves comfortable there. After all there's a comfortable sofa there, plenty of seating and free coffee. "There is no drinking and no smoking in my office," Jelpke had to say. After which, the atmosphere was no longer quite so comfortable.

The Left Party attracts these types -- people with shattered lives or the long term unemployed as well as so-called "hobby communists," those with plenty of free time for workshops and sit-in protests. Gysi estimates that about 10 percent of the party consists of such "nutters" but it's highly likely that the nutter count is even higher in the west.

The Left Party's federal and state representatives grit their teeth and deal with this. For as long as possible, the Left Party wants to be a blank canvas upon which as many people as possible can project as many dissatisfactions as possible. Discussions about the party's real manifesto will take place after the elections. Because if these were firmed up, then that would give everyone else a handle on the Left Party -- but then nobody would want to touch them.

Their targets are unclear, as is their direction. Party one, in the east, is a mainstream party that wants to remain palatable --and therefore a reasonable choice -- to the German middle class voters. Party two, in the west, insists that it is a splinter party with very specific interests. This, its members argue, differentiates them from the Social Democrats (SPD) and the Greens, already well entrenched in the west. However this also limits how popular they can ever be. Polls currently show the Left Party garnering between 6 and 7 percent of the votes in North Rhine-Westphalia.

To prevent the Left Party from looking like a fractured group of bickering subgroups and lone wolves, Gysi has for months been encouraging his party to contain itself. It has been a tricky experiment but at first it had appeared to be bearing fruit.

At the Left Party party convention in June, the two sides diligently stuck to their cease-fire. Gysi took to the podium and held a speech about unity -- a speech for which he was rewarded with a standing ovation. But as the delegates stood and applauded, Diether Dehm, the head of the Left Party in Lower Saxony stood up and hissed, "sit down. you know that every second counts." Dehm is a supporter of Lafontaine and did not want the usurper from the east to get one moment more attention than his own man. At which stage, an annoyed member from out of Brandenburg yelled out, "Shut your mouth, you asshole!" 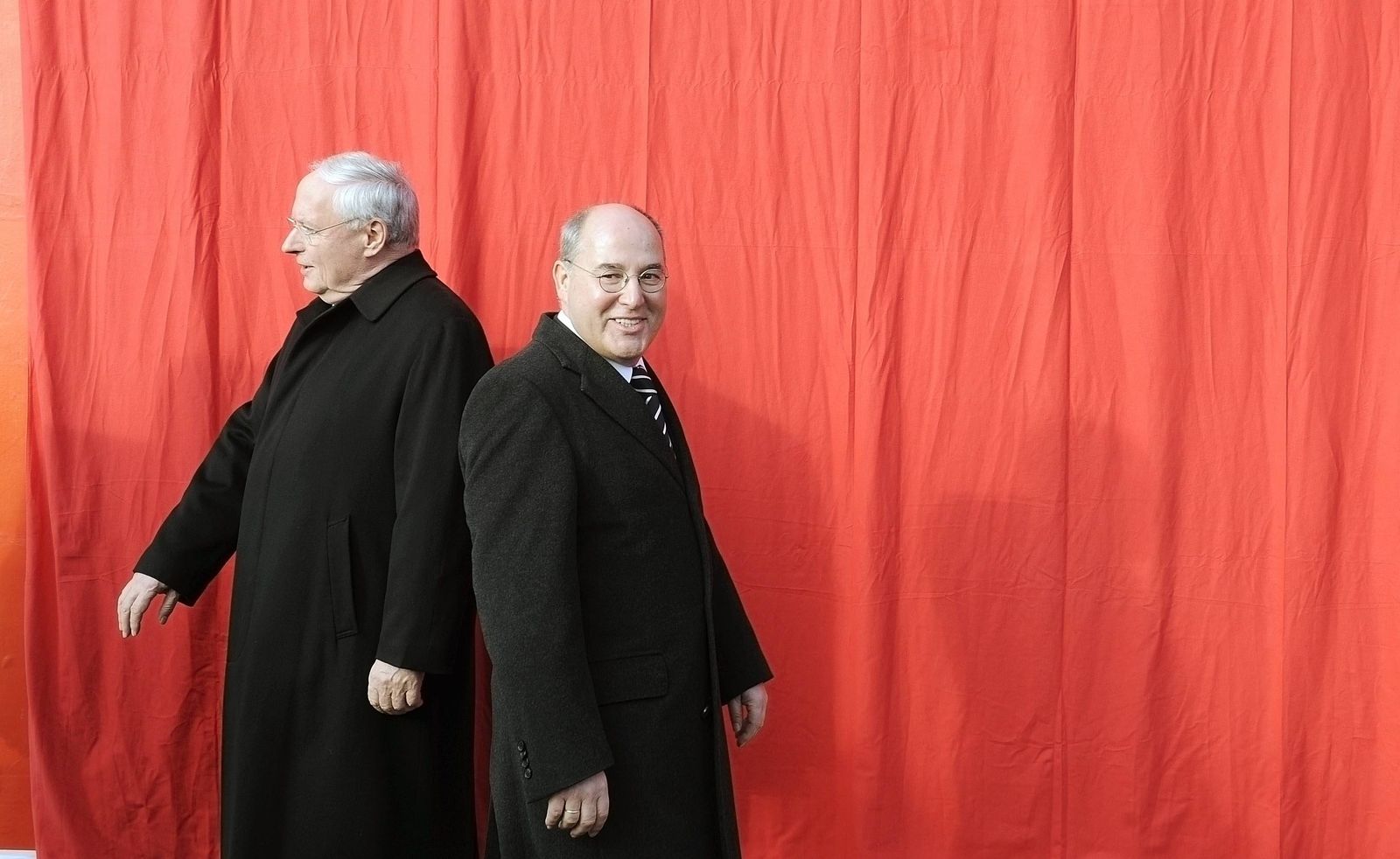 Oskar Lafontaine (left) and Gregor Gysi (right) have established the Left Party as a mainstream German political institution despite its roots in the former Communist Party.