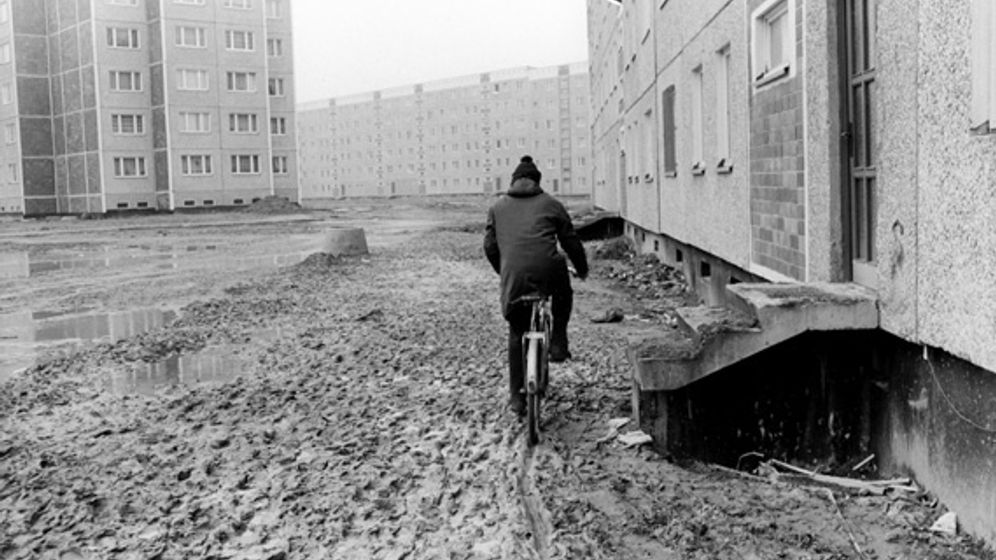 "Take a picture of that," my inner voice told me as I gazed out of the window of our new apartment onto the newly-built Lichtenhagen housing estate in Rostock. "It's so crazy you've got to record it! Now!" I pressed the shutter release.

Shortly before that, in early 1981, I had joined the local photography club of the state-owned shipbuilding enterprise VEB Warnowwerft Warnemünde. It was preparing an exhibition of photos of the city of Rostock, and the other club members wanted to know if I had anything to contribute. I had the idea of photographing typical scenes I came across on my daily trip to work.

I developed and printed the photos in my bathroom. I was pleased with the results and showed them to my mother-in-law. "For heaven's sake," she said. "Do you want to ruin your life?" I didn't understand what she was talking about.

So I submitted the photos and was immediately invited to the opening of the exhibition. I was unknown as a photographer and was astonished when the local district head of the cultural association came rushing up as soon as I had given my name. "Herr Wittenburg, Herr Wittenburg, we spent a lot of time discussing your pictures" I was about to feel flattered when she went on: "whether they can be published or not."

That's when I understood. My photos had deeply divided the communist comrades in their view of the socialist reality. While some of the exhibition visitors agreed that the muddy paths between the monumental concrete blocks closely resembled their own commute to work, others suspected that the photos of puddles amounted to inadmissible criticism of the lack of streets and pavements.

They saw my pictures as dragging socialist architectural achievements through the mud. In the years that followed I often encountered such opposing attitudes to my photos.

Later on, after the fall of the Berlin Wall, I read in the file the Stasi secret police had kept on me that a boss of mine at work was suspicious of my hobby. "Wittenburg appears to be trying to show his critical stance with certain photos (portrayal of unattractive views in newly built estates) but no general conclusion can be made," he reported.

That was lucky for me. Rebellious intentions could usually be detected from texts, but it was harder to be sure when it came to photos.

Additional photos from Siegfried Wittenburg can be seen at the Museum Falkensee outside of Berlin until Sept. 26, 2010. The exhibition -- "Grüsse aus der DDR" -- will then move to the Stadtbibliothek in Bremen for the first 10 days of October.
Mehr lesen über
East Germany Berlin Wall