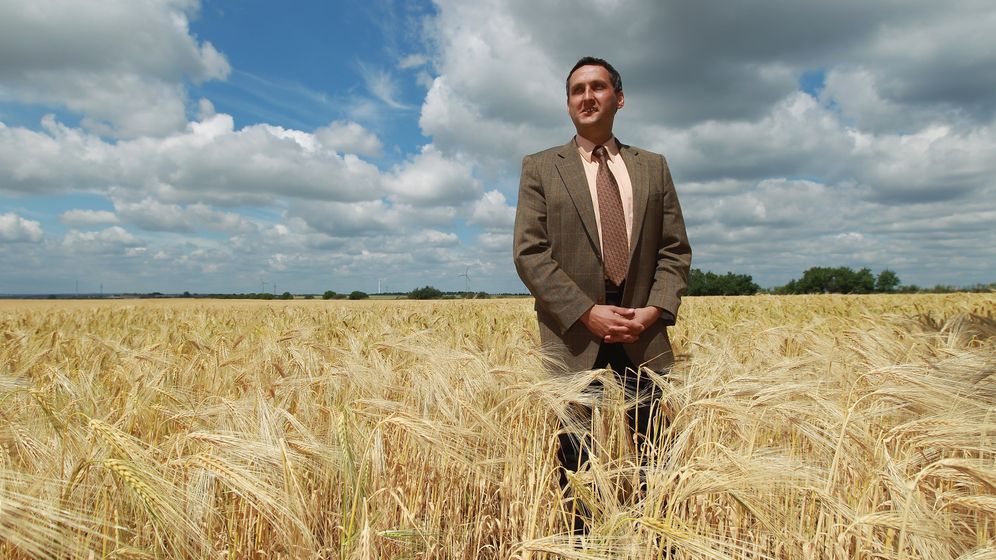 Werner Frohwitter drives his white Prius into Feldheim, parking halfway down the village's one street in front of what looks like a shipping container. Behind the street is a field where 43 giant wind turbines loom over the village's 37 houses. Frohwitter works for Energiequelle Gmbh, which owns the wind park. He greets a Russian camera crew and ushers them into the chilly container, which has become Feldheim's impromptu visitor's center. It's the only sign of life in this otherwise quiet village. Inside, he uses posters on the wall to explain the town's energy transformation for the Russian crew's renewable energy documentary.

This town of 150 inhabitants, tucked away in the Brandenburg countryside some 60 kilometers (37.2 miles) southwest of Berlin seems like an unlikely tourist hotspot. It has no bars, museums or restaurants. But since the Fukushima nuclear disaster one year ago, Feldheim has become a beacon for cities across the world that want to shift their energy mix toward renewables.

Feldheim is the only town in Germany that started its own energy grid and gets all of its electricity and heating through local renewable sources, primarily wind and biogas. This mix of energy self-sufficiency and reliance on renewables attracted 3,000 visitors in 2011. Visitors came from North and South Korea, South America, Canada, Iran, Iraq and Australia. About half of the visitors are from Japan.

Eri Otsu served as a translator for a group of Japanese energy analysts and politicians who came to Germany to see Feldheim. "Feldheim is not a charming Bavarian village; it is gray and they have little," says Otsu, an organic farmer in southern Japan. Still, the group found Feldheim the most impressive of the three German villages they visited because it is energy independent and uses renewables. "They were amazed and said they had never seen anything like that," Otsu says.

"People are here almost every day," says Michael Knape, shifting through a stack of business cards on his desk. He sighs, saying that he can't keep track of all the visitors. The 41-year-old, with dark hair and wide eyes that make his young face look even more boyish, is the mayor of Treuenbrietzen, the larger municipality where Feldheim sits.

In many ways Knape's work is typical of a small town mayor, dealing with residents when snow is not cleared fast enough and sometimes answering the phone at the city hall. What makes Knape different is that he is also a patient ambassador for Feldheim, convinced that investing in renewables is the only answer to the country's energy dilemma.

After the disaster at the Fukushima nuclear power plant, Chancellor Angela Merkel planned a phase-out for Germany's nuclear power plants and set the goal of requiring 35 percent of Germany's energy to come from renewables by 2020, up from 20 percent at the time. Yet the federal government is now cutting funding for renewable energy projects and phasing out solar subsidies.

Before Knape became mayor in 2002 he hadn't given much thought to energy-related issues. Now he is leaving the Free Democrats (FDP), Germany's pro-business party, over differences on energy policy. He invited party members responsible for energy issues from Berlin to see the project in Feldheim. "I had expected, hoped, that after Fukushima they would put all of their strength behind an energy transformation. But all of the decisions made since then have been the opposite," Knape says with resignation, his gaze shifting out the window.

A Series of Coincidences

It started with a few windmills in 1995. A series of coincidences transformed Feldheim from a backwater town in eastern Germany into a model renewable energy city. "Back in the 1990s no one expected it would get this far," says Frohwitter.

Feldheim's strong wind and abundant land are pretty much the only reason that Michael Raschermann, head of Energiequelle Gmbh, decided to install a wind turbine in the village. Now the wind park has more turbines than the village has houses.

By 2008, after two years of planning, Feldheim built a €1.7 million biogas factory to be used for heat and fueled by slurry of unused corn and pig manure. The village received about half of the startup costs from a European Union program. Because farmers in Feldheim already grew corn and raised pigs, the biogas factory also benefits local agriculture. A furnace burning wood chips left over from felled trees in the local forest serves as a backup heat source when the temperature dips.

In 2008 Feldheim decided to take control of its own grid. Cutting out the middleman was a natural step since the town was producing all of its own energy right in its backyard. But when E.on refused to sell or lease its energy grid, Feldheim, with help from Energiequelle, had to build its own smart grid. They completed the grid in October 2010 with each villager contributing €3,000 ($3,972). Now Feldheimers pay about 31 percent less for electricity and 10 percent less for heating. The project has created about 30 jobs in Feldheim.

"It was all built piece for piece, with each step an individual building block," says Knape. "We didn't know where it would go, or how we would do it, but we knew it was important to move in this direction."

Energiequelle is now working on a facility that will store enough excess electricity to cover demand for two days. By 2013, the white Info Container will be transformed into a full-blown visitor's center called the "New Energy Forum," which will conduct training to encourage students to enter the sector. By opening its own eatery, it will also serve to bring a restaurant back to town.

Germany's regulations and political climate discourage municipalities that want to come up with their own solution, says Knape. Feldheim had to go up against Germany's major public utility companies and energy regulators to create its network. While no laws strictly prohibit the move, the initial reaction of administrators was against the project. They had to be convinced that the local grid would exceed the standards of public utilities. For example, Feldheim had to guarantee that the energy supply must be uninterrupted, an important rule for big factories, but unimportant for households which would barely notice a one second break in electricity.

Navigating regulation -- especially after the German government rewrote energy laws in 2005 due to a EU directive -- is major hurdle for towns like Feldheim, says Christian Marthol, a partner in the energy practice of the law firm Rödl & Partners.

For example, there is an open discussion over whether towns should be allowed to produce more energy than they need because the state doesn't want them to be making profits from such ventures. So if a town wants to take over its grid it must accurately estimate usage and production.

In Feldheim residents hash out such details at a yearly meeting and hold neighbors accountable for under- or over-estimating usage. "They have to think about what happens behind the power socket, while most of us don't," says Knape.

Lightning in a Bottle

Feldheim captured lightning in a bottle, but whether visitors will be able to replicate its success remains in question. Despite challenges, towns across Germany are taking energy provision back into their own hands rather than waiting for federal government efforts, says Marthol. "There is no town in Germany that is not thinking about the energy revolution," he says.

Even in Germany's capital, Berlin, organizers are collecting signatures for a petition for the city to take over its electricity network from Vattenfall when its contract runs out in 2014. The group wants the city to push its energy mix towards more ecologically-friendly sources.

Germany's agriculture ministry is accepting applications for its second "Bioenergy Village" contest, which awards cities €10,000 each for promoting renewable energy projects. Feldheim was one of three villages recognized during the first contest in 2010. About 300 villages are working on energy projects with at least 60 of them eligible for the contest this year, says Marko Bobzien a collaborator on the initiative. "Each one is individual," he says. "One must find a unique solution for every village."

Karl Josef Ullrich, mayor of the Bavarian town of Collenberg, came to visit Feldheim in 2011. He admits that despite his admiration for Feldheim, the solutions implemented there won't work in his town.

"I am fascinated by (Knape's) unshakable optimism and by what he has achieved," says Ullrich. "Unfortunately, we cannot copy what they did. We just don't have the wind." The town also doesn't grow corn or other crops that can fuel a biogas plant. Still, the visit encouraged Ullrich to find some way to use more renewable energy.

Even Frohwitter of the Energiequelle company admits that "Feldheim is not a blueprint; it cannot be copied one to one." He estimates that it could be another 10 years before the entire Treuenbrietzen municipality can achieve what Feldheim has so far, due to a lack of funds and the right specialists.

Still, Feldheim should serve as an inspiration, he says. "The experience of Feldheim shows that nothing is impossible."