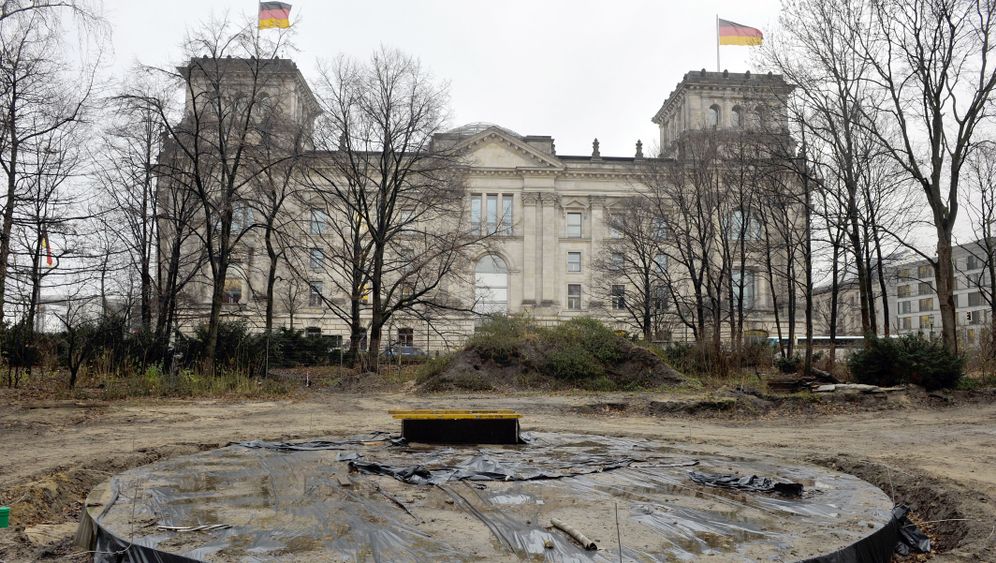 December 6 is usually a day for gift giving in Europe. But on St. Nicholas Day this year, Bernd Neumann, the commissioner for cultural and media affairs at the German Chancellery, received an unpleasant surprise in the mail. It was a letter from Israel, and it was filled with expression of outrage, like "disgrace," "credibility" and "parting of ways."

The note of protest was sent to Neumann, 68, in his capacity as warden of the nation's monuments and memorials. Whenever a memorial is built for victims of the Nazi dictatorship, Neumann, a member of Chancellor Angela Merkel's Christian Democrats, is the man in charge of construction. It's a job that requires a sensitive touch, as it addresses the placement of victims in history and the status of victims' organizations today. The erection of a new monument is almost always accompanied by harsh and highly emotional battles, sometimes lasting until the day of the dedication ceremony.

The current controversy revolves around a memorial to the roughly 500,000 Sinti and Roma murdered by Nazi Germany during World War II. The monument is under construction just across the street from the Reichstag, Germany's parliament building in Berlin, but the Israeli artist Dani Karavan, 80, and the client have been at odds for months. Initially the dispute was over such mundane issues as construction materials and expenses. But now the dispute is of a more fundamental nature. The artist is concerned about the "sanctity" of his work and is threatening to pull out. The project is in jeopardy.

A Small Pool of Water

It was a complicated undertaking from the start. In 1992, the German government promised the Sinti and the Roma a memorial of their own, because the Holocaust memorial in the heart of Berlin was to commemorate the extermination of the Jews. Other victim groups were promised their own memorials.

The government's partner in the construction of the monument is the Central Council of German Sinti and Roma and the group's chairman, Romani Rose, was responsible for bringing in Karavan, a headstrong but respected artist. His design for the memorial -- a small pool of water some 12 meters (39 feet) in diameter with a stele jutting out of the middle -- was accepted without a bidding process. But almost from the very beginning, the Sinti, the Roma, historians and the government became embroiled in a heated discussion over the wording of an inscription to honor the victims. Indeed, in 2009, while Germany's upper legislative chamber, the Bundesrat, was commemorating the persecution of the Sinti and Roma, police were called to the restrooms in the Bundesrat building to break up fights between members of various victim groups.

Now, however, construction is finally underway. The federal government has earmarked €2 million ($2.6 million) for the project -- plenty, one might assume, for the relatively simple fountain design planned.

That assumption, however, has proven to be incorrect. The attorney Peter Raue, an influential art aficionado partial to lengthy briefs, has taken on Karavan's case. "How much deviation from the perfect must the artist endure?" Raue asks, accusing the Berlin authorities of being "bureaucratic and suspicious." This is not the way to create works of art, he adds in a letter to city officials.

Not a single detail is being overlooked in the dispute. "Can it be guaranteed" that the steel being used in the construction is truly rust free? Does the water in the pool look as dark as the artist wants it to look? And who is supervising the company hired to build the monument?

Attorney Raue complains that the city is engaging in "secretiveness" because city officials have had the audacity to visit the construction site without Karavan or his representative present. There have been conflicts over weld seams, over when freshly delivered segments can be unpacked and whose fault it will be should rust develop later on. Karavan once complained that there were "unacceptable irregularities" in the pool, and he has been on the verge of obtaining a court order to stop construction.

In a series of toxic briefs, both sides are now blaming each other for delays. Karavan's special wishes, say Berlin city officials, have delayed the project by two years -- "at least." Raue, on the other hand, accuses the city bureaucrats of being "impolite and destructive" and is not ruling out the "collapse of the project," saying: "The artist will withdraw his name if the work is not done in accordance with his specifications."

By now, Chancellery officials are tired of the whole affair. They also suspect that there is something else behind the "artist's constant requests for changes," namely that it is merely a way of demanding a higher fee and higher expenses in the end. A lump-sum reimbursement for travel expenses had been agreed with Karavan, and the Israeli was expected to fly to Germany 10 times for meetings and site visits. But then he claimed higher costs for individual tickets to Berlin or, in one case, a visit to the Philharmonic including a meal for his guests. "Absolutely not reimbursable," the officials concluded.

Waiting for a Thaw

But how exactly does one reach the German capital inexpensively? By flying with El Al or Lufthansa? And should the elderly artist be allowed to fly Business Class? Attorney Raue and the Berlin administration have been exchanging sharply worded notes, initially about solder points and test reports, and now about the cheapest possible plane tickets. His client has never submitted an inaccurate expense report. Because everything is taking so long, says Raue, he is now determined to achieve a higher fee for the Israeli artist.

Culture Commissioner Neumann is doing his best to keep his cool, tactfully trying to placate all parties. He wants to see the work completed, "in agreement with the artist, if possible," he emphasizes. Neumann sees himself called upon to serve as an arbitrator.

The scheduled date of the dedication ceremony, October 28, has already passed, and not without a dispute over a new date. Now the parties are vaguely shooting for next May. Whether it will happen remains to be seen.

For now winter weather has brought construction to a halt. Both sides are waiting for a thaw. 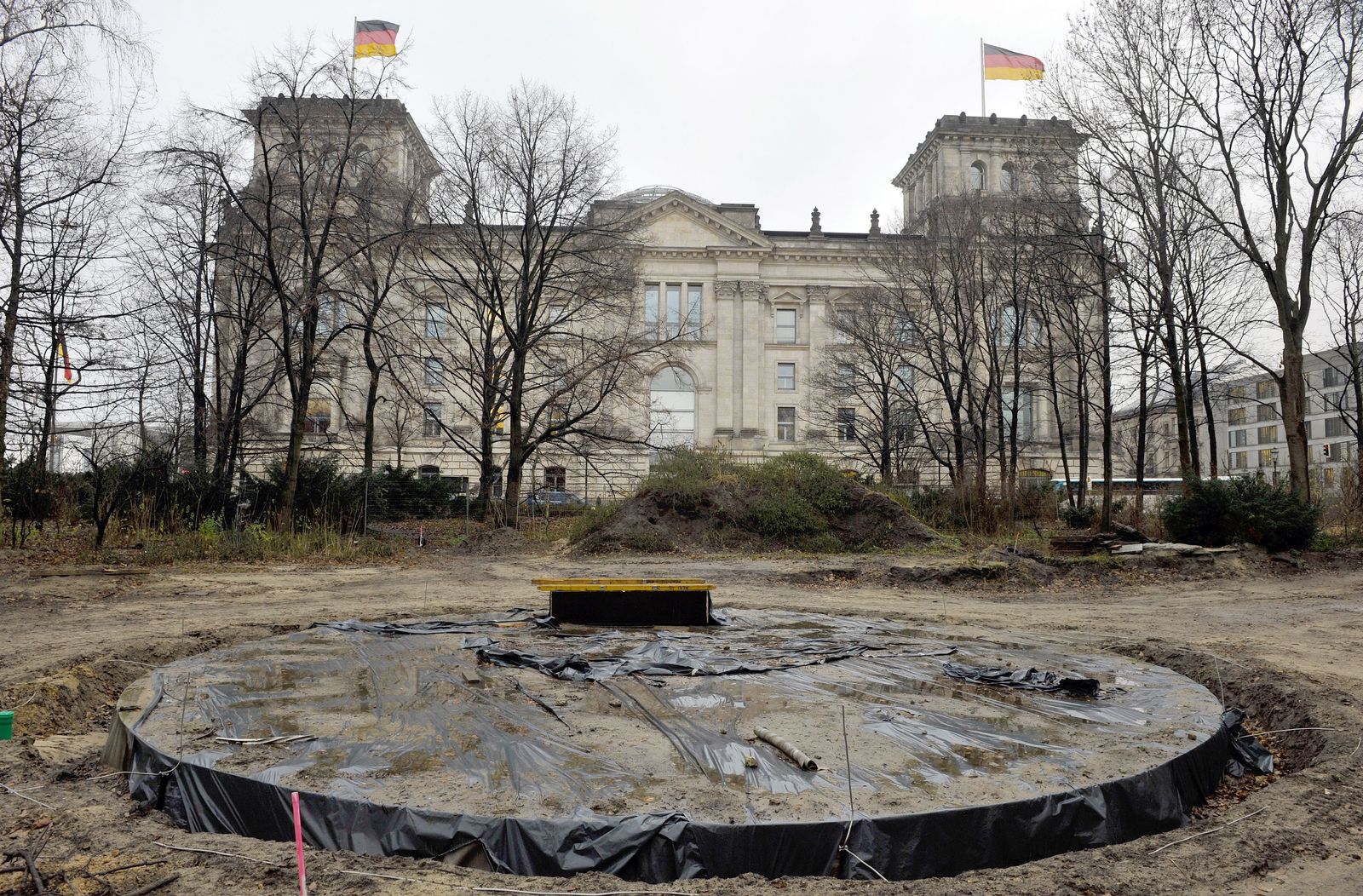 A new monument to the Sinti and Roma murdered by Nazi Germany during the Holocaust is going near the parliament building, the Reichstag, in Berlin. This image is from 2008 -- but ongoing disputes between the government in Berlin and the monument's artist Dani Karavan have meant that construction is well behind schedule.