Germany's federal parliament, the Bundestag, passed a historic package of laws Thursday that commits the nation -- once and for all -- to a phase-out of nuclear power by 2022. The step is unprecedented in Europe, and it marks the final act in a decades-long political drama that began with a grassroots anti-nuclear movement in the 1970s, which gave rise to the German Green Party.

Chancellor Angela Merkel has led the charge against nuclear power only since March, but the Bundestag this morning voted overwhelmingly to close Germany's remaining nine active plants according to a fixed, 11-year schedule. The vote was 513:79, with eight abstentions. Many of the "no" votes came from the Left Party, which argued for a swifter timeline.

A nuclear phase-out plan was first approved a decade ago, under a previous government consisting of Social Democrats and Greens, but Chancellor Angela Merkel's more conservative coalition had retracted the plan last year -- granting some nuclear plants another 14 years of life. She quickly reversed course after the accident at Japan's Fukushima reactors in March.

The reversal is remarkable for a leader of the conservative Christian Democrats, who are considered close to the German nuclear lobby. But the center-left Social Democrats and Greens have been uncomfortable with the recent attention focused on Merkel, since the phase-out was originally their idea.

Sigmar Gabriel, a former environmental minister for the Social Democrats, railed on Thursday that his party and the Greens had suffered nothing but "malice, calumny, insult, and defamation" from conservatives for the older phase-out plan.

He accused Merkel's government of opportunism, repeating the common criticism that her reversal was a desperate political response to the general unpopularity of nuclear power among German voters.

Economics Minister Philipp Rösler, who is head of the business-friendly Free Democratic Party and also deputy chancellor, said Gabriel's criticism "lacked credibility." A previous economics minister, Michael Glos, of the Christian Social Union, the Bavarian sister party to Merkel's Christian Democrats, declared he would not vote for the phase-out at all. "There are a number of reasons why I cannot agree to this," he said, but the main reason, he claimed, was that an end to nuclear power would mean a domestic revival of coal.

The end of nuclear power would force Germany to use more fossil fuels, he argued, "because the development of renewable energies won't be fast enough."

The Greening of Germany

Thursday's package of laws, however, commits Germany to an ambitious green-energy course. By 2020 the national fraction of power drawn from renewable sources -- solar, wind, biomass, etc. -- will have to double from today's 17 to 35 percent. Government subsidies for water power and geothermal energy will be increased, but support for solar, biomass, and land-based wind energy will fall.

Part of the government strategy is to allow for a huge expansion of wind turbines on the North Sea -- some 25,000 megawatts' worth of new offshore wind power will have to be developed by 2030. Germany will also need a larger supergrid to move the current from the north to growing cities, like Munich, in the south. For that the new laws call for the addition of some 3,600 kilometers to the country's "energy Autobahn" of high-capacity power lines.

The package also includes tax incentives to renovate buildings erected before 1995, so they meet modern heating and insulation standards. Germany has already committed to a European Union goal of slashing greenhouse-gas emissions by 20 percent before 2020.

Merkel has said she would prefer that energy providers not buy nuclear power from neighboring countries like France in order to make up the shortfall after 2022. By this September the Federal Network Agency, which oversees German energy markets, will decide whether one of the eight nuclear plants already closed in recent months should be kept ready on a "cold reserve" basis, to ease bottlenecks in the national energy supply. 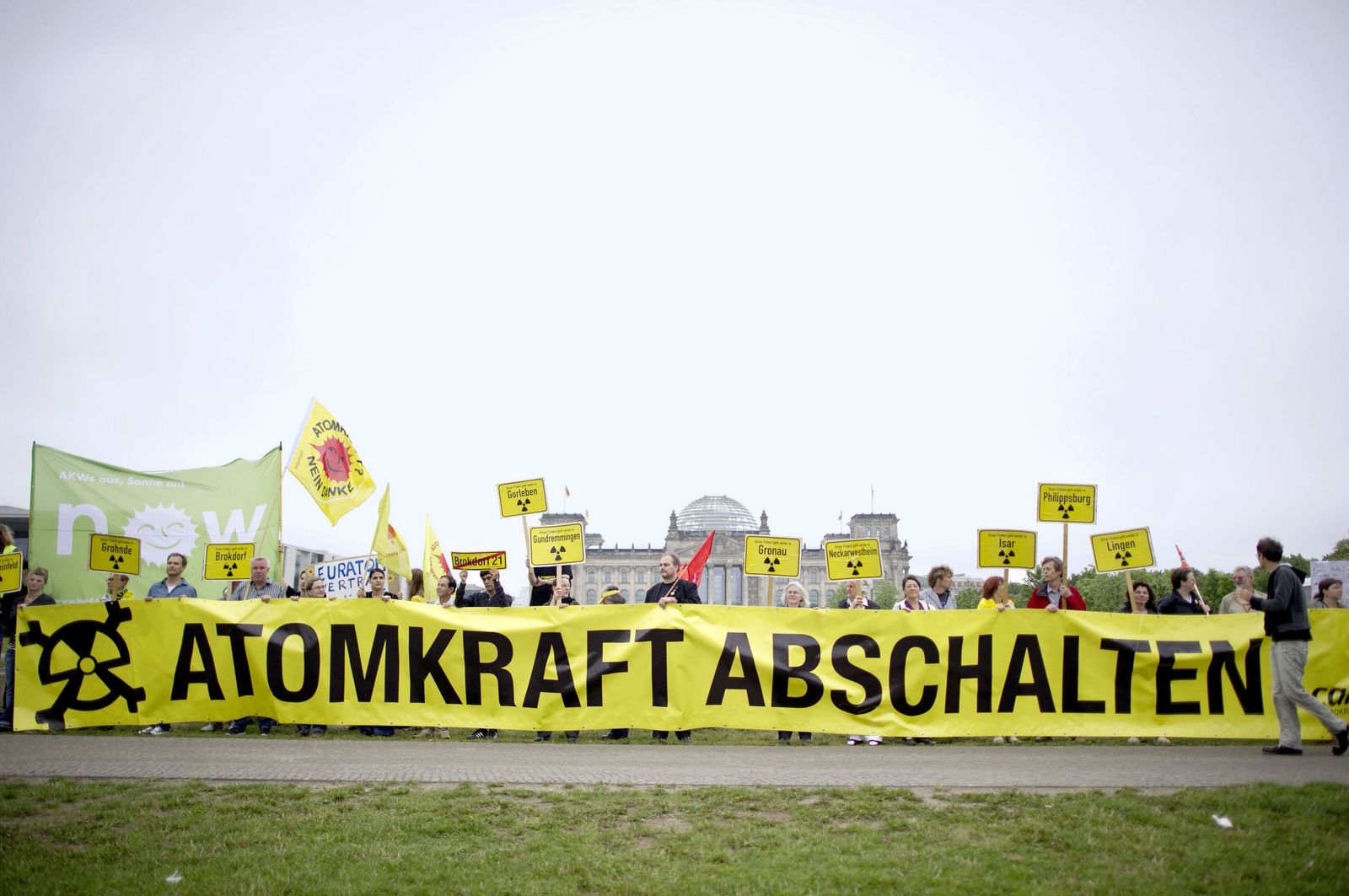 Will anti-nuclear protests, like this one held ahead of an important vote in parliament in Berlin on Thursday, become less common now that Germany is abandoning the atom?