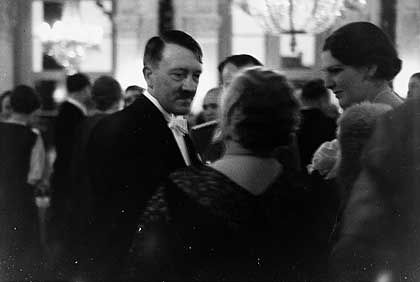 Hitler visited the opera almost daily. And when the going got tough, apparently he didn't mind listening to music created by Jews.

The story sounds like the fairy tale "Open Sesame!"

It's set on a mid-May day in 1945 in war-ravaged Berlin. Lev Besymenski, the captain of the military intelligence service of the First Belarusian Front, is given a mission: Together with two other officers, he is to inspect the Reich Chancellery -- stormed just a few days before -- including the underground bunker where Hitler stayed during the war and eventually committed suicide.

Besymenski is an expert, and he also speaks German. He served as an interpreter during the arrest of Field Marshal Friedrich Paulus in Stalingrad in 1943 and had only recently, on 1 May, translated the news for Stalin from German General Hans Krebs that Hitler had died. Later he will reveal to the world what the Soviets long treated as something akin to a state secret -- that they found the remains of Hitler's corpse in the garden of the Reich Chancellery.

But on this day, he is standing in the imposing building on Berlin's Wilhelmstrasse. He has meticulously searched the headquarters of the Nazi regime for several hours. Suddenly the Soviet commander responsible for the building asks him what souvenir he would like to take with him.

His comrades have already helped themselves to cutlery engraved with the initials "A. H." They have selected leather cases containing medals and other trinkets. But Besymenski is thinking of something else. He asks the officer to open several large iron doors for him that have been secured with special locks.

"We were faced with a strange sight," he would write decades later: "Several rows of sturdy wooden boxes stood in each room, numbered and packed closely together." German service staff said the boxes were packed for shipment to the Berghof, Hitler's residence in Bavaria, but the trip never took place, according to Besymenski. The boxes were filled with crockery and various household effects.

Besymenski fills a box with souvenirs for himself and later takes it back to Moscow on a special train. Forty-six years will go by before his daughter Alexandra discovers the booty by chance.

It's August 1991, a pleasant summer day in the dacha settlement Nikolina-Gora close to Moscow, where the Besymenski family owns a house. The family has visitors, and steaming blinis are placed on the veranda table at lunchtime. Then it's time to relax. Besymenski sends his daughter into the attic to get badminton rackets.

A Record Collection from the Führerhauptquartier

It's dark and cramped up there, with boxes of books standing around. "My shin hit something solid," Besymenskaya -- who is 53 today -- recounts. "It was a stack of records." They are labelled with rectangular, finely serrated stickers that make her freeze. "Führerhauptquartier," the print on the stickers reads.

She rushes downstairs excitedly with her discovery. "Daddy, what's this, and why is it lying on the attic?" she asks. "Can't you see, they're records. I switched to CDs years ago," the 70-year-old grumbles. That's all he wants to say. "I sensed how uncomfortable Lev Besymenski was about the topic," one of his guests will later remember.

The reason for his nervousness was presumably that Besymenski, who became a respected historian and a professor at the military academy in Moscow after the war, was trying to prevent people from suspecting him of being a plunderer. Nowhere in his later books about Hitler does he mention what he personally took from Berlin to Moscow in 1945: parts of the record collection at the Führer's headquarters.

While it was customary at the time for the victors to take plentiful souvenirs back home, some of them went too far and became embroiled in scandal. Take the example of Marshal Georgy Zhukov. The man who won the battles of Moscow and Stalingrad and later became the Supreme Military Commander of the Soviet Occupation Zone in Germany made off with, among other things, "55 works of classical painting, six boxes containing expensive tableware and tea sets, nine golden watches and 713 pieces of silverware," according to Moscow secret police records. The booty came from the Prussian palaces in Potsdam near Berlin.

Music lover Besymenski, on the other hand, took from the Reich Chancellery what corresponded to his personal passion. He had been a frequent guest at the Moscow Conservatory before the war. He died in June of this year, at the age of 86. And last week, his daughter Alexandra allowed SPIEGEL to view the collection of about 100 shellac records.

Most of them are stored in red and some of them in blue albums. Each album contains about a dozen records. Some records are scratched and others are broken, but most are well preserved.

Album No. 1, weather-beaten due to the dampness and the temperature shifts in the attic of the Besymenski datcha, contains nothing particularly surprising. It includes the Piano Sonatas No. 24 in F-sharp major and No. 27 in E-minor by Ludwig van Beethoven, for example, or the overture to Wagner's "Fliegender Holländer," performed by the Orchestra of the Bayreuth Festspielhaus with Heinz Tietjen (the director of the Festspielhaus between 1931 and 1944) conducting.

Hitler's second passion, after architecture, was music. He went to the opera house almost daily during his time in Vienna to listen to the music of Beethoven, Wagner, Liszt or Brahms. But to him, only German music counted. Yet Besymenski's collection astonishingly contains works by composers the Nazis considered "subhumans," including Russian composers such as Pyotr Tchaikovsky, Alexander Borodin and Sergei Rachmaninov.

For example, the item with the inventory number "Führerhauptquartier 840" contains a recording by the Electrola company labeled "Bass in Russian with Orchestra and Chorus" -- a recording of the aria "The Death of Boris Godunov" by Russian composer Modest Mussorgsky, sung by Russian bass Feodor Chaliapin.

Another album contains nothing but works by Tchaikovsky with solo performances by star violinist Bronislav Huberman, a Polish Jew. "I feel this is a sheer mockery of the millions of Slavs and Jews who had to die because of the racial ideology of the Nazis," a stirred-up Alexandra Besymenskaya remarks today.

Taking Refuge in the Music of His Enemies

As Hitler, possessed by his manic idea of conquering the world, grew increasingly solitary and seldom faced the public anymore, he apparently tried to relax by listening to records. His radio operator Rochus Misch, who is 90 years old today and is the last surviving witness from the bunker, told SPIEGEL about how Hitler once ordered his servant to play a record following an intense argument with the command of the Wehrmacht at the Werwolf headquarters in Vinnytsia, Ukraine: "Then he sat there, absorbed in thought. The Führer probably wanted to distract himself," Misch says.

In moments like that, the otherwise bigoted Hitler apparently didn't care who the music was by -- notwithstanding the fact that he had always denied that Jewish people were capable of independent cultural achievement. In "Mein Kampf," he insists there has never been such a thing as Jewish art, and that the "queen of all arts," architecture, "owes nothing original to the Jews."

As late as his last directive to the soldiers on the Eastern Front from April 15, 1945 -- one day before the Soviet Red Army crossed the Oder River and prepared to siege Berlin -- Hitler ranted against the "mortal Jewish-Bolshevik enemy" from the Führerbunker beneath the garden of the Old Reich Chancellery.

But the dictator and his minions were quite capable of appreciating the works of Jewish artists. The record collection, which was presumably stored in the air-raid shelter beneath the New Reich Chancellery, includes recordings of musicians such as Austrian Jew Artur Schnabel. Schnabel left Germany immediately after the Nazis came to power in 1933. His mother, though, stayed behind and was deported to the Theresienstadt concentration camp and murdered by the Nazis.

Besymenski, himself Jewish, was surprised by the number of famous Russian names he discovered on the records from the bunker. "They were recordings of classical music, performed by the best orchestras in Europe and Germany, with the best solo performers of the time. ... I was surprised that it also featured Russian music," the historian wrote when he was pressured by his daughter three years ago, for the sake of posterity, to leave a written testimony of how he obtained the collection.

US troops had already discovered numerous records in a cavern in the Berghof in 1945 -- a different part of the musical collection that was compiled for Hitler and other high-ranking Nazis. Historian Philipp Gassert of Heidelberg University had access to some of these records when he was doing research in the United States. Like the records now rediscovered in Moscow, those examined by Gassert had small serrated labels.

Lev Besymenski sometimes listened to the Nazi records together with his best friends. Sometimes, he wrote, he also lent them to musicians -- included conductor Kiril Kondrashin and famous pianists Emil Gilels and Jakow Sak.

His daughter Alexandra says she will think calmly about what she wants to do with her father's collection, "over a glass of wine." That's the name of a cheeky soldier's song set to music by the court chapel master of Braunschweig, Franz Abt, in the 19th century. The number of the record is "Führerhauptquartier 779."