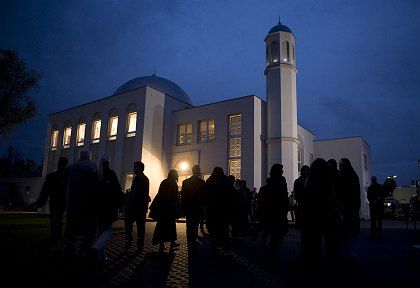 150 people showed up to protest the opening of the Khadija mosque, the first in East Germany.

Eastern Germany finally got its first Muslim house of worship, almost two decades after reunification, on Thursday with the official opening of the Khadija Mosque in Berlin's Heinersdorf district. With 500 hundred police on hand, security forces easily outnumbered the relatively small group of protesters.

Although four separate demonstrations had been planned -- two against the construction of the mosque and two against anti-Muslim hatred -- in the end only 150 people showed up for a single protest organized by the Heinersdorf Community of Interested Citizens, a group that has long opposed the mosque's construction.

"The polticians screwed us over," one protester declared to SPIEGEL ONLINE, complaining that the project had been pushed through despite local opposition. Another protester -- a retired man sporting a fedora hat and horn-rimmed glasses -- asserted that the Ahmadiyya were only building the mosque "to bother us." Many of those present held signs, including one reading: "Welcome to the Middle Ages."

Germany's far-right National Democratic Party (NPD) cancelled its planned protest at the last moment due to lack of interest. Still, at least 20 neo-Nazis showed up, decked in bomber jackets and armed with aggressive language. "They don't belong here, they're causing anxiety," said one, who couldn't quite identify the anxiety he was referring to.

All things considered, the demonstration was relatively small. "One hundred fifty protesters -- there were many more last time," noted student Asif Malik. "That's really an improvement."

Two years ago, in March 2006, ten times as many people showed up at an information meeting held at a local school to register their disapproval of the project. That meeting descended into chaos when a group of neo-Nazis began chanting "Wir sind das Volk" -- "we are the people" -- a slogan from the anti-Communist protests of the 1980s. In the end, police had to shut down the meeting and escort the Ahmadiyya away under special protection.

The Amadiyya sect, whose numbers in Germany total about 30,000, come mostly from Pakistan and style themselves as a "conservative reform movement" within Islam. Founded in 1889 in India by Mirs Ghulam Ahmed, the Ahmadiyya take an unorthodox approach to Islam, recognizing lesser "shadow prophets" in addition to Mohammed. As a result, the group often faces persecution in the Middle East. In 1974, the Pakistani government declared them to be "un-Muslim." The following year they were expelled from the Saudi Arabian-led Muslim World League.

This isn't the first time the Ahmadiyya have tried to erect a mosque in Berlin. Back in 1920, an attempt was made to build a structure entirely using the savings of members of the congregations. The plan was called off, however, after a world economic downturn diminished many of the investments that were supposed to fund the project. Now, as the world reels from yet another economic crisis, the Ahmadiyya have finally achieved what they set out to do so many years ago.