The patient at the Hamburg-Eilbek Hospital describes to doctors how she first had diarrhea, and then grew progressively weaker to the point where she could no longer eat and barely make it to the toilet. When blood appeared in her stool, she became terrified. The young woman at the hospital's intensive-care unit in the northern German port city suspects that lettuce was responsible for putting her in this deadly situation. She then breaks out in tears, completely distraught.

Thanks to several dialysis procedures, she will most likely survive her case of hemolytic-uremic syndrome (HUS), a particularly aggressive complication related to the enterohaemorrhagic E. coli, or EHEC, that has appeared in more than one-quarter of the patients infected by the bacteria. So far, around 2,800 people have been infected in the dramatic outbreak of this rare strain of E. Coli, with at least 722 contracting HUS and 29 dead so far in Germany and elsewhere in Europe. The number of new cases has diminished this week, but the outbreak has left doctors pondering serious questions about the new epidemic.

Rolf Stahl, a nephrologist at Hamburg's University Clinic Hamburg-Eppendorf, explains that, "Neurologists are being confronted with a totally new disease pattern." Never before has an EHEC germ been as aggressive -- and many consider this to be a new epidemic.

And although the majority will survive, some patients will have lasting and serious health problems. "A considerable number of the patients will permanently lose their kidney function and will be dependent on dialysis for the rest of their lives," says Stahl.

At Hamburg-Eilbek, the female patient's kidneys are faring far better, improving with each day that passes. However, a new problem has arisen: She is unable to completely raise her right arm. Eating with a spoon and writing have become difficult for her, and no one knows what will happen next.

Daniel Wertheimer, the physician-in-chief at the Center for Neurology and Neurological Early Rehabilitation at the Schön Clinic in Hamburg's Eilbek neighborhood, says that even something as seemingly mundane as the way she handles a spoon must be closely monitored. The young woman's conspicuous emotional distress also needs to be observed, he adds, because it could be a subtle precursor of much more serious neurological complications of the EHEC infection. They are the most uncanny concomitant feature of this E. coli outbreak.

"We were all looking at the kidney symptoms at first," says Wertheimer. "But perhaps EHEC will eventually go down in history as the pathogen that caused serious damage to the central nervous system." The replacement of blood plasma will likely safeguard most patients from a lifetime of dialysis, as long as there is enough stored blood and available staff at hospitals. In this respect, the two Hamburg hospitals handling the largest number of cases, in the Eppendorf and Altona neighborhoods, have been close to reaching their capacity at times since the outbreak.

But the bitterest realization of recent days has been that the neurological conditions can develop not only in patients with full-blown HUS, but also in those whose platelet counts have been severely reduced -- a much larger group of people. "Three weeks ago I would have said that 15 to 20 percent of the severe cases would develop neurological complications," says Wertheimer. "Today I would say it's about half."

The symptoms can appear very early on, which is why patients who arrive at the Hamburg hospitals with unclear neurological symptoms like epileptic seizures or paralysis are first asked about diarrhea.

Wertheimer requires that all EHEC patients with severe symptoms be seen as soon as possible by a neurologist with experience in intensive-care medicine. "They should be given a neurological exam at least once a day," he says. Otherwise, he points out, the minor alarming signs could be easily overlooked. They include symptoms like the young woman's noticeable distress, mild disorientation and personality changes. "At the beginning, patients are perhaps just very upset. They have emotional outbursts and shout a lot, but in the end it can turn into very severe neurological deficits."

The doctors are seeing patients who have trouble finding words, can't remember things, have extremely severe epileptic seizures or fall into a coma. "Neurologically speaking, EHEC is like a chameleon," Wertheimer explains. Practically all known complications are associated with EHEC, complications that can also trigger a stroke, traumatic brain injury or meningitis.

But why is this happening? Does the EHEC pathogen migrate all the way into the brain? No, says Wertheimer, it's more complicated than that. The E. coli strain involved, O104:H4, produces the Shiga toxin. The toxin itself isn't the only problem, however. The body's immunological response to the Shiga toxin causes the walls of all blood vessels, including those in the brain, to become inflamed and swollen. The blood vessels can be likened to pipes with an inside lining that becomes thicker and thicker, until they eventually become clogged. When that happens, parts of the brain are no longer supplied with blood and, in the worse case, can be irreversibly damaged.

At the same time, the blood vessels become abnormally porous. Toxins produced naturally in the body migrate into the organs, and water seeps into the tissue. The entire body becomes swollen with edemas. Pressure rises in the brain, which is as firmly enclosed by the skull as a nut by its shell. As a result, epileptic seizures can occur, and entire areas of the brain can malfunction, either temporarily or permanently. This can be extremely dangerous.

Wertheimer believes that it's too early to draw any conclusions about the neurological processes of all these patients. Although his family hasn't eaten any uncooked food for more than a week now, he says that this is a purely personal decision, and that he doesn't want to trigger a panic. Instead, Wertheimer would rather focus on the early treatment and rehabilitation of these deficits.

"When regions of the brain fail, they are gone for the time being, possibly forever." For this reason, it is important not to allow any valuable time to be lost, just as it is with strokes. "Acute treatment is needed, but early rehab needs to be started at the same time: occupational therapy, logotherapy and physical therapy, the full program."

Although the number of infections is slowing, no single treatment has been found that can be effective for the majority of patients. And that leaves people asking what will hapen the next time this super strain of E. coli infects a large number of people.

Parallels to AIDS in the 1980s

Indeed, O104:H4 is giving the medical world a feeling of powerlessness it hasn't felt in a long time. Wertheimer compares it to the AIDS outbreak in the 1980s. "In the era of antibiotics, we suddenly had an infection that we couldn't treat. That was a shock."

As in the AIDS epidemic, microorganisms are recapturing terrain once again, and doing so in a perfidious manner. The EHEC bacteria produce even more of their toxin when they die off. If antibiotics were used against the bacteria, the toxin would literally flood the body.

And what of the appealing view of mankind triumphing over the infectious diseases of medieval times? A myth, says Wertheimer. 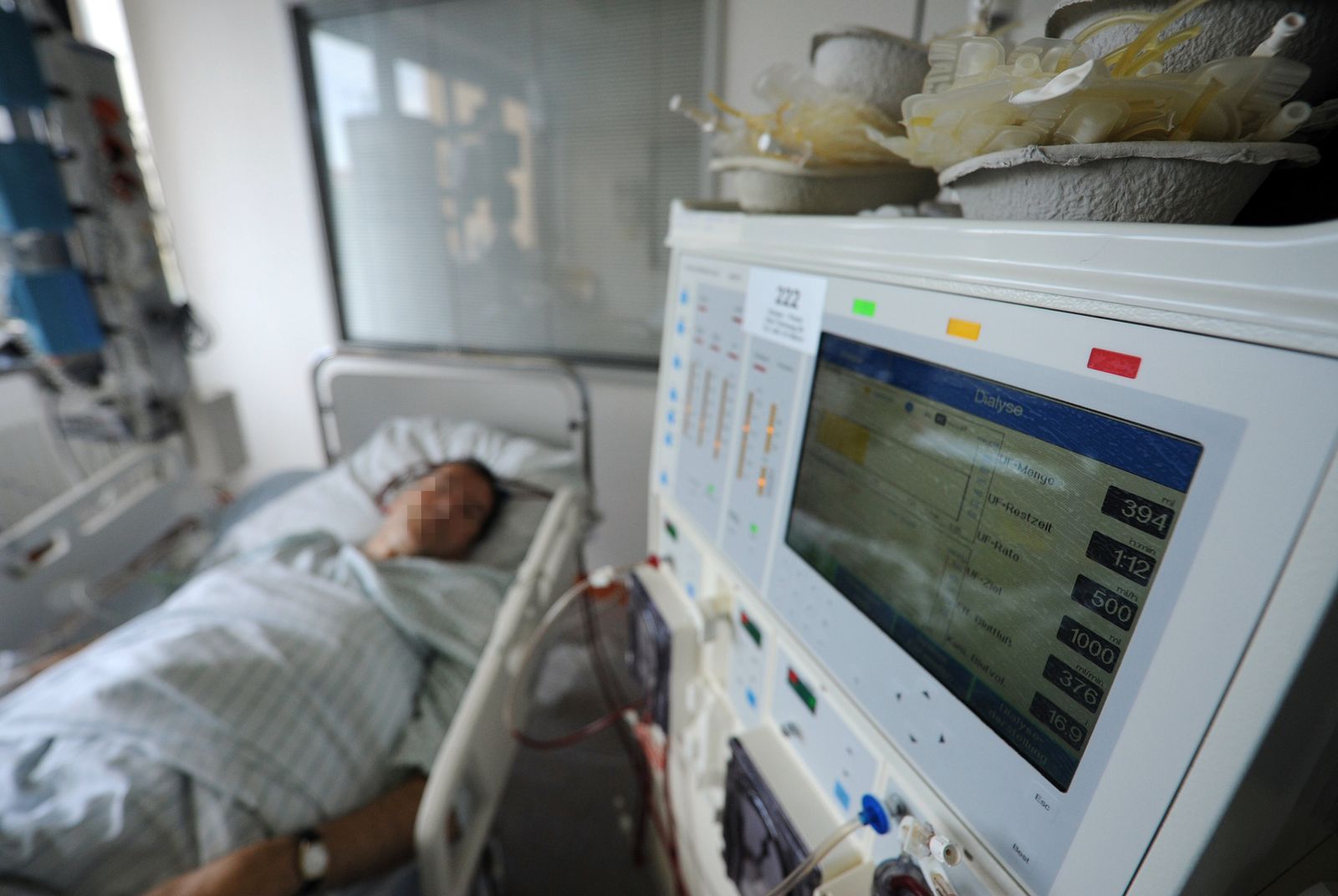 An EHEC patient receives treatment at a Hamburg hospital.