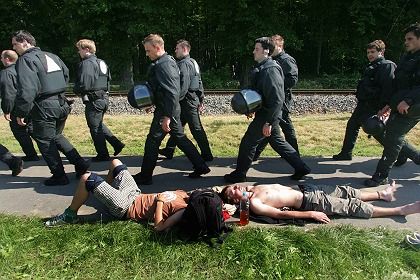 It was a long night just outside the fence surrounding the G-8 summit at Heiligendamm. But for the demonstrators manning the blockades on the streets leading to the meeting venue, it was a night of pleasant euphoria.

After a Wednesday spent dodging police during their trudge through fields and forests on their mission to block access roads as close to the summit as possible, hundreds spent the night at the two successfully established barricades not removed by the police. And on Thursday, with reinforcements on the way, planners said they don't plan to leave anytime soon.

"We are staying at the places where we are," a visibly exhausted Christoph Kleine, one of the organizers behind the "Block G-8" group which masterminded Wednesday's blockade strategy, told SPIEGEL ONLINE. Kleine himself spent much of the night near the race track near one of the gates leading into the fenced-off area. "We do not intend to try and improve on our success from yesterday. We will continue doing what we are doing. It has been a tremendous victory and nobody can take that away from us."

Despite police statements to the contrary, it is difficult to dispute Kleine's assessment of Wednesday's events. Scenes of thousands of demonstrators streaming across the landscape near Germany's Baltic Sea coast have managed to grab at least some of the headlines away from world leaders inside the Heiligendamm resort. Roads across the region were blocked for hours, with press heading for the summit ultimately having to board ships to ferry around the blockades.

The 16,000 police on hand seemed not to have an answer to the invasion. Indeed, on Wednesday evening, hundreds of protesters stormed the fence and managed to rip the razor wire from the top of the 2.5-meter-high barrier along a 250-meter section. Among them were a number of black-clad anarchists from the Black Bloc and there were scattered scenes of violence. Elsewhere during the night, barricades were set on fire and one blockade near the west side of the fence was removed by police armed with water cannons.

But the two blockades that survived the night remained peaceful, with Block G-8 organizers distancing themselves on Thursday from the violence. The police reported some 150 people arrested and also said that 16 officers were injured. On Thursday morning a Greenpeace ship managed to breach the no-go zone extending 11 kilometers offshore from Heiligendamm.

Organizers of Block G-8 in Rostock, however, disputed the police version of what happened on Wednesday and during the night. According to Ulrike Donat, from a legal support group in Hamburg, as many as 700 demonstrators were taken unto custody, many of them being locked in mobile detention centers. They also claimed to have reports of officers using excessive force in breaking up the blockades.

"I have heard from the demonstrators themselves that many have been arrested and put into cages like at Guantanamo," she said. "There were 20 people per cage. We have tried to get in touch with them, but it sometimes takes up to 10 hours before the police allow us contact."

Donat, who cut her legal teeth helping out those protesting against the Castor nuclear transports that periodically deliver nuclear waste to the storage facility at Gorleben in Germany, also complained that Germany's constitution seems to have been suspended for the duration of the G-8 summit. "Sometimes you have to accept that police power has the last say at certain moments," she said. "To be right and to have your rights are two different things."

On Thursday, the police were preparing for more of the same. A number of roads near Bad Doberan were blocked by a massive police presence and the protester camp at Reddelich, home to thousands of anti-globalization activists, was being kept under a watchful eye. Some of the first blockade marches on Wednesday emerged from the Reddelich camp.

The giant "star march" originally planned to descend on the Heiligendamm venue from all sides on Thursday, was banned by Germany's high court and organizers have cancelled the demonstration. It is unclear whether demonstrators will attempt to hold the march anyway. Originally, police had established a ban on demonstrations anywhere near the fence, but the protests of Wednesday essentially made a mockery of that ban and thousands of demonstrators are protesting outside the fence on Thursday.