The notorious Stasi prison in the Berlin district of Hohenschönhausen, a gray complex of cells and interrogation rooms where political prisoners were incarcerated and subjected to psychological torture by East Germany's secret police, has attracted so many visitors that it's close to bankruptcy. 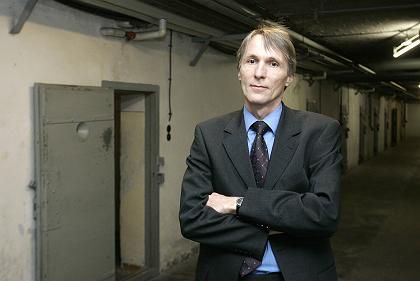 A total of 80,000 pupils have visited the grim site in northeastern Berlin this year, an increase of 26 percent from last year. "We have become victims of our own success," Hubertus Knabe, the director of the site, said on Monday. "We're pleased that so many pupils visit us, but the resulting costs are overstretching our finances."

In July alone, a total of 39,000 people of all ages took part in tours of Hohenschönhausen that are mostly given by former inmates. That was more than ever before and represented an increase of 50 percent from July last year. Pupils make up most of the visitors.

Knabe has responded by appealing for donations from companies, associations and celebrities. School classes are being asked for a voluntary donation of €1 per pupil. If the site doesn't manage to boost its income sufficiently it will have to cut the number of tours sharply, Knabe said.

The site can only be visited as part of a tour. Adults pay €4 and there's a concession price of €2 for students, pensioners, unemployed people and people with disabilities.

"We're already having to turn away groups for some days in September and October," André Kokisch, a spokesman for the site, told SPIEGEL ONLINE. "From May through July we had an average of 1,500 visitors a day. It's putting a lot of strain on the guides."

The museum employs more than 30 former prisoners as tour guides. They tell visitors about how the Ministry for State Security locked up a total of 250,000 political prisoners during East Germany's 41-year communist dictatorship, of whom 72,000 were held because they were caught attempting to flee the West.

The prisoners also explain conditions in the prison, which was so secret that it wasn't shown on communist-era maps of Berlin. They were subjected to humiliating strip searches and to psychological torture, such as being told that they might never be released and could be made to "disappear," or that their relatives would also be incarcerated.

Prisoners were kept in solitary confinement and were not allowed to touch their beds until 10 p.m. when the lights were turned out. During the night they had to lie on their backs at all times. The guards would check on them throughout the night and would scream at prisoners if they were found to be lying on their side.

"Our visitor statistics show clearly that eastern Germans continue to avoid confronting the dark side of their own past," Knabe said in April. "It's a sad development because at the same time the general denial of Stasi crimes and the embellishment of the German Democrat Republic have increased sharply."