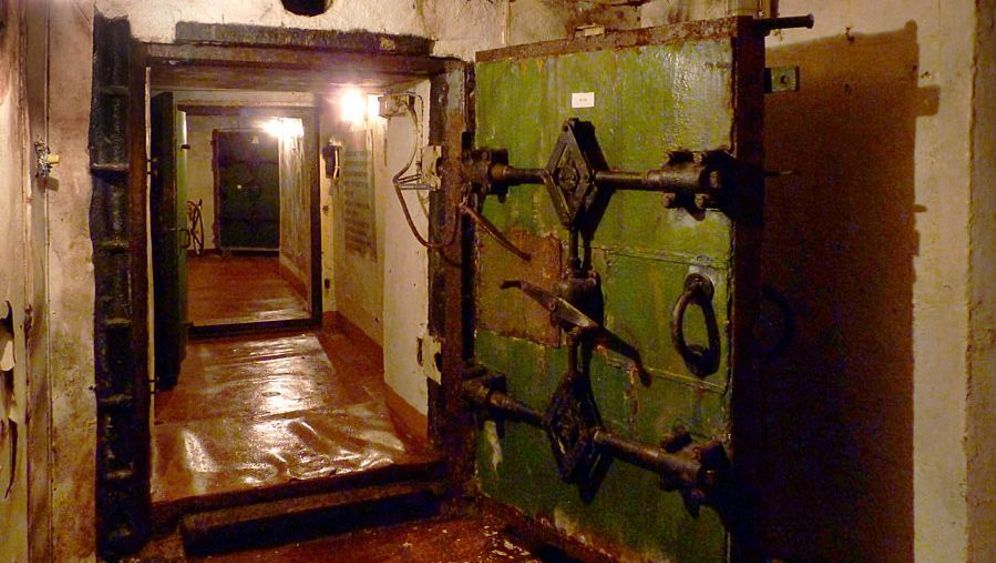 Warning signals wailed throughout the city, their strange rise and fall bringing bad tidings. For civilians, it was a sign to turn on their radios, but that wasn't an option for soldiers, since the German Democratic Republic's (GDR) armed forces, the National People's Army, didn't allow private receivers. Instead, the naval sergeant's whistle sounded before he commanded: "Retrieve your weapons!"

Still in their underwear, the sailors, currently stationed on land, hurried to the armory then back to the barracks, where they pulled on their uniforms and boots, grabbed packs from their lockers, jammed steel helmets on their heads, reached for their protective gear and ran to the waiting fleet of vehicles. After waiting 10 minutes, the driver declared the troops ready to march. The next commands came: "Drive! Put on full protective gear!" That's when things got uncomfortable, as the sailors had six seconds to slip on gas masks and two minutes for their complete protective gear. Seconds later, a column of camouflage vehicles set into motion carrying over 200 rubber-suited apparitions.

From their command center in the Gehlsdorf district of Rostock, a city near the Baltic Sea in what was then East Germany, the People's Navy headed down the 110 motorway, through the village of Sanitz and the small town of Tessin. In a patch of woods, the vehicles turned toward the town of Laage. A road made of concrete slabs began a few kilometers later, followed by a double line of fencing and a keep out sign. Behind this came a boom gate, a watch building, three-story barracks and other auxiliary buildings.

"Disembark!" an officer commanded as the column of vehicles halted some 70 minutes since the battle alarm sounded. Other apparitions in rubber protective suits showed the way into the woods, revealing a flight of stairs leading 12 meters (40 feet) into the ground. Beneath a heavy steel door a hallway opened up, revealing an airlock and four additional steel doors. In the space of 20 more minutes, the reputedly nuclear fallout-proof bunker had swallowed up 300 leaders of East Germany's People's Navy. The entire operation took 90 minutes. "Remove protective gear!" came the next command as the doors were locked. The sailors, drenched in sweat, helped each other out of their suits, setting down their weapons and assigning tasks.

All that, at least, was the plan. This location was meant to serve as a base from which to direct the naval combat in the event of war -- but such a situation never came to pass. With the collapse of communism in the GDR, the People's Navy's central command post in the northern German town of Tessin slipped into obscurity. In 1993 the Bundeswehr, the armed forces of reunified Germany, sealed off the bunker that few people -- even in Tessin -- ever knew existed. Now, in the summer of 2011, it's possible for the first time to tour this mysterious Cold War time capsule, an enormous 3,000-square-meter (32,000-square-foot), two-story facility, roughly equivalent to two ice hockey rinks stacked on top of one another.

The oppressive atmosphere that reigned there is still palpable. It must have been warm, uncomfortably warm. One thermometer shows 34 degrees Celsius (93 degrees Fahrenheit) as the normal temperature. The heat came from electronic equipment, the computer center and life support systems that supplied air, water and food. A maintenance unit of 69 men kept the facility ready for use around the clock. A maximum of 15 percent of the unit was allowed to be absent at any time, meaning that at most five men could be on vacation or otherwise outside the bunker, even at Christmas. Absolute secrecy was required, with the project categorized as "classified."

'Don't Look at the Atomic Flash'

The bunker was designed and built during the Cold War in Europe and an actual war in Vietnam. The Berlin Wall had been standing for just eight years when design and construction began in 1969. The facility went into operation on December 1, 1974. Construction cost 62 million East German marks, an amount equivalent to the average monthly salaries of 100,000 East Germans.

At the time, the Iron Curtain divided Europe from the North Atlantic down through the Baltic Sea and all the way to the Black Sea. The western part of the Baltic Sea was the theater of operations for People's Army ships.

Germany, at the front line between the two military blocs of NATO and the Warsaw Pact, was seen as a strategic playing field for nuclear, biological and chemical weapons of mass destruction. This is where the global powers faced off, threatening one another and employing entire armies and segments of their countries' industries to do so. If it had come to a conflict or an inadvertent exchange of blows, all of Germany, east and west alike, would have been destroyed by nuclear weapons. Every person in the country would likely have fallen victim to the blast wave, the heat and the radioactivity.

For those many millions of people living in both East and West Germany, there were hardly any protective measures in place for cases of emergency. In the GDR, the laughably absurd instructions were, "Don't look at the atomic flash, seek cover and lie down flat on the ground."

There is no doubt that the city of Rostock on the Baltic Sea coast, with its 250,000 residents and a surrounding area with half a million people, was one potential target for NATO's nuclear missiles. A naval fleet was stationed here, along with an artillery regiment, a motorized guard regiment with tank battalions, anti-aircraft missiles in the woods, Red Army facilities and a naval air wing with a fighter jet squadron -- all near city limits. A naval ship repair yard and various production facilities, including ones for military shipbuilding, also employed countless people.

The World War III scenarios thought up by both sides of the conflict have remained largely secret, but there are indications that these bunkers were dug into the forest floor within range of NATO's nuclear missiles specifically to provide the ability to conduct a "preemptive" first nuclear strike. Historians estimate that the intent was to anticipate the enemy by three minutes, although this still would have triggered a hierarchical chain reaction. The principle was, "Whoever shoots first, dies second." It was a plan that entailed complete mutual annihilation.

The first bunker with the highest protective rating was erected to serve as the main command center for the GDR's National Defense Ministry and located in Hennickendorf, south of Berlin. The second was built in Tessin, near Rostock, and appears to have been designed and built with the intention that its occupants would first kill, then die themselves. In the case of a nuclear attack, once 3.5-ton entrance door was locked, the bunker would become a grave, albeit one offering a reprieve of 16 to 20 days, depending on the air supply.

Decisions about Life and Death

Massive amounts of air compressed into reservoirs, together with filtering and ventilation systems, provided a constant supply of oxygen for the bunker. In the case of radioactive contamination, a commander in charge of the air lock would decide whether a person died outside the bunker or inside -- assuming that person was still able to knock at the door. If a nuclear weapon detonated with around 25 kilogram-force per square centimeter -- equivalent to a five-ton shockwave directly to the skull -- death would have come more quickly outside, while inside the bunker, the force would have thrown people against one another.

For the same reason, all technical equipment inside the bunker was suspended from springs. The floors between the nine long hallways have vibration-cushioning suspension, giving way when stepped on, with concrete walls up to 1.5 meters (five feet) thick between them.

The dispatcher at the technical control center, who was technically the head engineer for the bunker's engine room, controlled all of the equipment from an armchair with a headrest. Water came from enormous storage tanks and from the bunker's own well, which could draw water from a depth of 15 meters (50 feet), as long as it wasn't contaminated. Three diesel engines saw to the electrical power supply, while also recharging batteries that served as backup for emergencies. The bunker's galley provided food, with storage rooms full of meat, potatoes, bread and other ingredients, including spices. The sailors were familiar with such conditions. Sleeping quarters were cramped, with washrooms, showers, toilets, and mess halls for both officers and sailors. There was also a doctor on hand in an infirmary to treat both women and men.

This combat post existed to serve only one purpose: commanding the fleet, in coordination with the military leadership of the Warsaw Pact. In order to do so, the commanding officer and his staff needed information sent in over radio, cable and pneumatic tubes. All divisions worked to support the command center, a large room furnished with a carpet and a map of the western Baltic Sea as its centerpiece. This is where, if it came down to it, decisions would be reached about the life and death of millions of people in West Germany, East Germany and Denmark.

Nodding Off in Paradise

The officers, sailors, secretaries, cooks, technicians, communications specialists, photo lab technicians, doctors or nurses who would have ended up in this bunker in the case of an attack would presumably have realized the situation they were in. They would likely have been forced to leave their families without saying goodbye. They would have known that if they opened that steel door, they would find a hostile nuclear desert. Meanwhile the stuffy air inside would be slowly running out.

At this point, people inside would have likely drawn closer together, nearer to the ventilation system. This is precisely the location where someone saw fit to arrange a pleasant room with wallpaper and a sitting nook where the survivors could simply nod off when the oxygen was gone. Perhaps someone would have smuggled in a bottle of East German brandy. They would have told stories, had a drink and laughed, even though reality was impossibly sad. On the wall of this room is a framed picture by Jean Effel, a cartoonist who was popular in the GDR despite being French, a member of the class enemy. The picture shows Adam and Eve making love in paradise. The title is "The Creation of the World."

A larger and more modern expansion to the bunker was planned for between 1990 and 1994 for a further 63 million East German marks, but the democratic revolution in Eastern Europe and the fall of the Iron Curtain negated those plans. Those who knew of the secret bunker were never actually released from their vow of secrecy after the collapse of East Germany's Socialist Unity Party (SED) or during the course of German reunification. The matter was simply forgotten. Military regulations hadn't provided for the possibility that the Cold War might someday end.