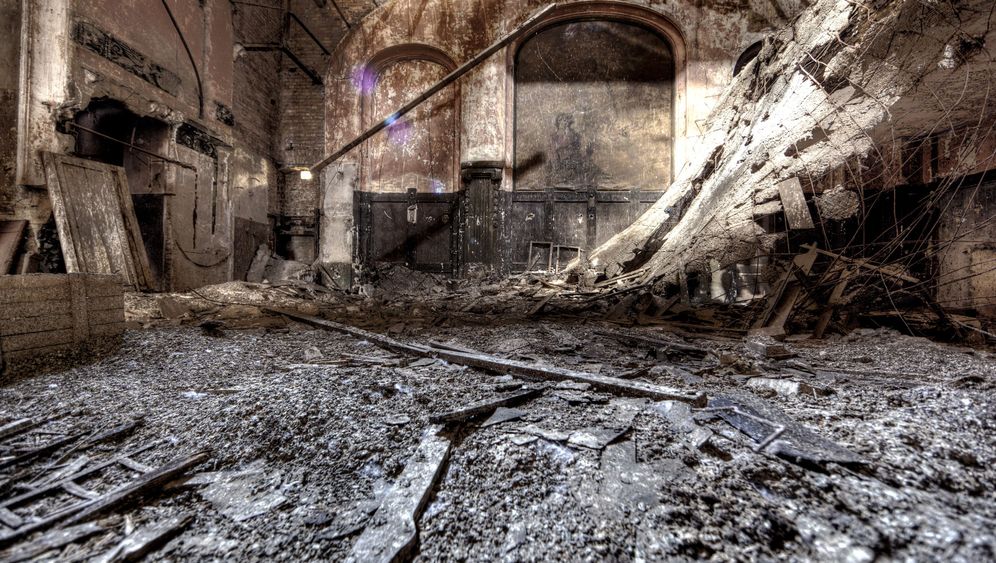 It was nearly four years ago that real estate developer Dirk Moritz first noticed a run-down building in the trendy central Berlin district of Mitte. He was visiting a public indoor swimming pool with his daughter next door when he saw it, hidden from the street inside the courtyard of another property, Gartenstrasse 6. It was three stories high and of all its windows were boarded up. Moritz describes it as "deserted and dilapidated."

"Something just didn't seem right with the building," he says.

Out of curiosity, Moritz asked the caretaker for the keys to take a peek inside. What he found was a mess: 30 tons of garbage that included everything from old sofas to shoes to construction rubble. Much of the building wasn't even accessible. Still, its high ceilings, wall paintings and big theatrical stage clearly had a story to tell. The discovery inspired an odyssey of research, the results of which Moritz has only now revealed.

He first got in touch with the owners -- a group of Czech heirs that had reacquired the property amid the post-reunification privatization of former East Berlin. He wanted to know more about its history, imagining an old private residence or church property. Sadly, all the owners' records and documentation had been lost or destroyed.

Internet searches and trips to the city registers and museums produced nothing. Finally, after teaming up with the Berlin-Mitte municipal archives and putting out calls to private collections, he came across postcards containing pictures of the interior when it was in use more than 80 years ago as a swinging cabaret hall and restaurant. Gradually, the property's rich history began to emerge.

From Theater to Locksmith's Shop

The building was erected in 1905 by Oscar Garbe, one of Berlin's prolific builders in the late 19th and early 20th centuries. It was equipped with arched ceilings and a stage, and was first used to house "Fritz Schmidt's Restaurant and Party Hall."

In 1919, the site became the "Hummingbird Party Hall and Cabaret" and apparently remained so throughout the 1920s -- the heyday of German "Kabarett" as a form of political satire and cynical comedic entertainment.

From 1934, one year after the Nazis came to power, Moritz found no mention of the building as a theater or restaurant. There's no information on exactly why the venue closed, but the Kabarett scene, with its saucy parodies, was often subject to Nazi suppression. After World War II, when the neighborhood fell under Soviet-occupied East Berlin, it was used to store garbage and building rubble. Later, the ground floor was used as a locksmith's shop. By the time the Czech organization inherited the building, it had been abandoned and fallen into disrepair.

Moritz, founder and CEO of the real estate firm Moritz Group, bought the building last year and has since been clearing out the mess. Last week, he revealed both his discovery and some of his plans for the building. Going by the project name Secret Garden, it will presumably the first public use of the building since the 1930s.

Further Renovation in the Works

Part of the building is being rented by an art gallery, which is currently housing an exhibition by British artist Mike Nelson. But after the show ends on Oct. 13, Moritz plans on closing the building down again to draw up plans for further renovation, budgeted at about €1.7 million ($2.2 million) and due to start by the end of the year. One of his ideas is to turn it into a mixed-use art gallery and temporary residence.

Returning the building to its original use as a cabaret theater and restaurant, however, isn't feasible, he says. Its cramped surroundings and close proximity to residential buildings present a logistical nightmare. But Moritz does plan on bringing back at least some of the interior's original feel, and continuing to dig into the building's past.

"We would be ecstatic if someone turned up with an old menu from the restaurant or a program from the theater," he says.

Moritz is careful to distinguish his firm from the many other real estate developers in the German capital, who are often despised for their big building projects that some residents believe push up property values and trample on the city's alternative vibe. He says Moritz Group goes after the most complicated and ambitious properties and tries to flip them for better use -- in this case, something well within reach.