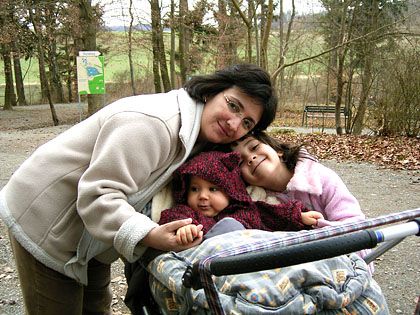 Sule Eisele-Gaffaroglu says she was discriminated against when she was pregnant with her youngest.

Employers in the United States have long known that if you discriminate against a worker on the basis of race or gender, the price tag could be huge. Aerospace giant Lockheed Martin found that out the hard way at the beginning of the year by being whacked with a $2.5 million settlement for its treatment of former employee Charles Daniels, an African American.

But in Germany, companies on the losing end of discrimination cases have typically been given little more than a slap on the wrist. Fines are often low enough that they hardly make a dent in the petty cash drawer. Now, though, a case is working its way through the German court system which may lead to a significant increase in the penalties associated with such lawsuits. Set for an initial trial date in May, it could also add teeth and contours to the country's 19-month-old anti-discrimination law.

"This case will surely be a signal," Klaus Michael Alenfelder told SPIEGEL ONLINE. Alenfelder is the lawyer trying the case of Sule Eisele-Gaffaroglu, a German citizen of Turkish heritage who is suing her employer for €500,000 ($785,000) on claims she was demoted because she became pregnant. "The effect will be a reduction in discrimination. If it's no fun any more. If it's expensive and it hurts, companies won't do it any more," Alenfelder said.

'I Stopped the Meeting Immediately'

Eisele-Gaffaroglu, 38, first informed her employer R+V Insurance that she was pregnant with her second child in December 2006. She told her boss that she planned to take her allotted three-month pregnancy leave, but intended to return to work soon after childbirth without taking advantage of parental leave -- an extended leave option available to mothers.

Her employer, though, had other ideas, she claims. Soon before she was set to go on pregnancy leave, Eisele-Gaffaroglu says her boss introduced her to the person she thought would be her temporary replacement. But it soon became apparent to Eisele-Gaffaraoglu that the new employee had been hired to replace her not just for her pregnancy leave, but also for the longterm. In short, her job was being handed to someone else.

"I stopped the meeting immediately and said I wouldn't say one more thing without a lawyer," Eisele-Gaffaroglu told SPIEGEL ONLINE. "I went back to my office and cried. I was destroyed. I don't even know how I got home that day. I had to go to the doctor immediately because of a pain in my belly. I thought I was losing my baby."

Eisele-Gaffaroglu, who also has a five-year-old daughter together with her stay-at-home husband, works as an insurance agent and her salary is dependent on how many policies she sells. In a good month, she'll get a little extra on payday. But in a bad month, her employer may pay her less.

She claims that when she insisted on returning to work after the birth of her new child, R+V assigned her to a far less lucrative region which, on average, produces just 13 percent of the turnover of her previous area of responsibility in Bad Saulgau in southwestern Germany. Worse yet, the man given Eisele-Gaffaroglu's previous district, she says, was provided with an office, an assistant and a higher salary than she had been receiving -- all things Eisele-Gaffaroglu had been requesting for years.

"You simply can't be thrown out because you are pregnant. That is illegal," says Alenfelder. "I really think that the court will see that there has been discrimination in this case. I wouldn't want to be on the other side." He also says that, while sexism is the primary complaint, his client was also treated worse because of her Turkish background.

According to German law, mothers on pregnancy leave are guaranteed their job when they return. Should they opt to take advantage of the extended parental leave available to them, their employers are not obligated to give them back the same position, but returning mothers must be offered a comparable position that pays at least as much.

R+V Insurance, which, among the many products it sells also offers a policy protecting companies against discrimination lawsuits, denies any wrongdoing. "No one was discriminated against in this case," the company said in an e-mail statement. "R+V responded early (to the 2006 anti-discrimination law) by holding presentations and training sessions for all our employees. Thus, we cannot imagine that a violation of this law took place."

Eisele-Gaffaroglu's first lawyer was hardly an expert in the field of anti-discrimination law and advised her to take the €7,000 settlement R+V was offering her. She was unwilling to do so -- testament to the stubbornness which sets her apart from most victims of discriminatory treatment, says Alenfelder, who is also the president of the German Society for Anti-Discrimination Law.

"There are a lot of companies in Germany that deal with personnel issues through the practice of mobbing" -- group pressure to force someone to quit -- "or discrimination," Alenfelder claims. "It has become normal in Germany that companies push people out via mobbing. If they realize that they will just have to pay a €50,000 penalty, then they'll keep doing it."

The problem Alenfelder points to is exactly what the 2006 law, based on directives handed down from the European Union, was meant to address. In Germany, the idea of passing a strong anti-discrimination law was not a universally popular one. The public debate leading up to the passage of the law that August went on for months. Many conservative politicians backed industry leaders who claimed that the anti-discrimination law would be bad for business and that it even posed a real danger to the German economy.

But in the months after the law went into effect, there have been very few cases to put the statute's new provisions up to a test. Those that have gone to court have so far tended to be very low profile. A group of Lufthansa pilots were unsuccessful in an attempt to use the law to limit the amount of flying hours required of those aged 60 or over. A successful case against a Hamburg logistics company resulted in equal pay at the firm for women. But no case has yet resulted in the kind of expensive penalties Alenfelder hopes to see if the court rules in Eisele-Gaffaroglu's favor.

Alenfelder has spent years giving lectures across Germany in an effort to convince companies that treating employees with respect is simply good business practice. But, he says, the practice has persisted. Which is why he thinks it is time to fight companies that practice discrimination in court.

"In cases in the US, they know that the risks to such behavior are huge," he says. "Here in Germany, there simply hasn't been enough risk associated with the practice."

Eisele-Gaffaroglu has since gone back to work for R+V -- in the new region assigned to her -- so as not to make herself open to accusations that she is uncooperative. But she remains adamant about carrying her case through to the end. She and her lawyer Alenfelder are busily preparing for the first day of hearings, currently set for May 15.

"She is a very courageous woman with a strong backbone to carry this suit through," Alenfelder said. "Others let themselves be walked on. With some victims of discrimination, it has to be seen as a minor victory if they don't get down on all fours and lick their boss' shoes."