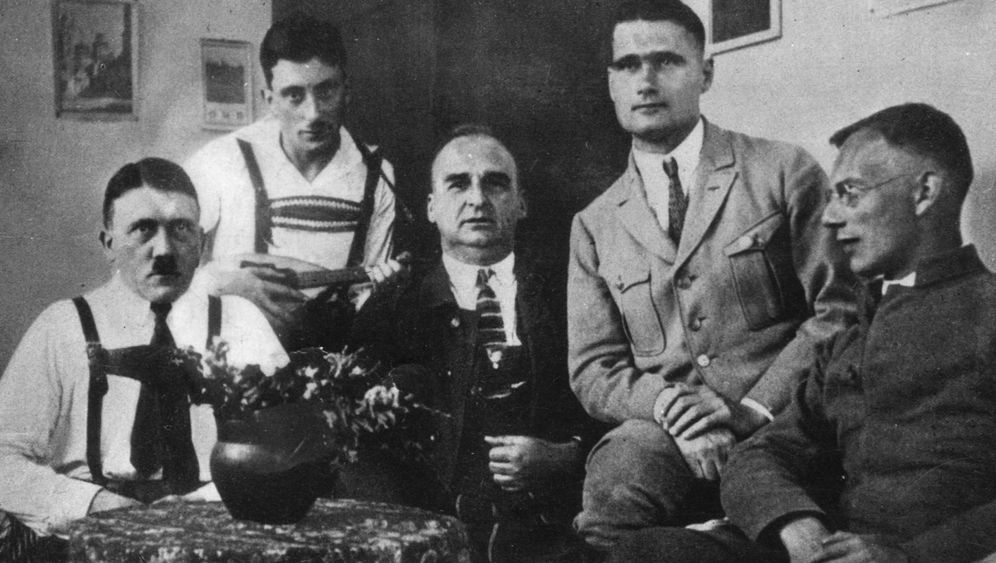 A personnel manager couldn't have been more well-meaning in his description. "He was always reasonable, frugal, modest and polite to everyone, especially the officials at the facility," prison warden Otto Leybold wrote about the inmate on Sept. 18, 1924. The prisoner, he added, didn't smoke or drink and "submitted willingly to all restrictions."

The prisoner to whom the warden was referring so reverentially was none other than Adolf Hitler. Still an ambitious beer-hall agitator at the time, Hitler was serving a prison sentence at Landsberg Castle for attempting to stage a coup against the Weimar Republic in November 1923, together with fellow right-wing extremists.

It was a defining period for Hitler and German history. According to his biographer Ian Kershaw, his time in prison Hitler served as the genesis "of his later absolute preeminence in the völkisch movement and his ascendancy to supreme leadership."

It is commonly known that the conditions of Hitler's incarceration in Landsberg am Lech were comfortable, and that he used his time there to write Mein Kampf. But historic documents now offer new insights into how he was able to continue to organize his network under the eyes of the prison management.

The material, which probably stems from the former records office at Landsberg Prison, is to be sold at auction at the Behringer Auction House in the Bavarian city of Fürth on July 2. The bundle of paper includes 300 cards filled out by Hitler's visitors, as well as extensive correspondence from the prison management.

Some of the documents were previously unknown, while others are transcripts of papers that have already been analyzed. They include a copy of the excessively mild sentence imposed by the Munich People's Court: five years imprisonment at Landsberg Castle, with the possibility of parole.

One of the newly discovered documents is the prison's "intake book," which contains an entry that reads: "Hitler, Adolf." Date of admission: April 1, 1924. Medical examination results: "health, of moderate strength." Height: 1.75 meters (5'9"). Weight: 77 kilograms (169 lbs.) The names of the loyal followers who joined Hitler at Landsberg are listed on the same page: Friedrich Weber, Hermann Kriebel, Emil Maurice and his later deputy, Rudolf Hess.

Hitler began to receive visitors shortly after he was admitted to the prison. Erich Ludendorff, the strategist behind the Battle of Tannenberg in World War I who, to his outrage, was acquitted of charges of involvement in the Hitler-led coup attempt, visited several times. Hitler's other guests included "Captain Röhm, Munich," "Councillor Dr. Frick, Munich" and "Alfred Rosenberg, certified architect and writer, Munich," the inner circle of leaders of the young Nazi Party at the time. Röhm, Frick and Rosenberg later became head of the SA, interior minister of the German Reich and the Nazis' chief ideologue, respectively.

Other visitors could more readily be categorized as wealthy benefactors, like Helene Bechstein, the wife of a Berlin piano manufacturer, who shared Hitler's love for the music of Richard Wagner. Another visitor, Hermine Hoffman from Munich's Solln neighborhood, was nicknamed "Hitler's Mommy." According to the documents, the attentive visitor and widow of a school principal also had securities sent to Hitler.

As an inmate, Hitler wanted for nothing. His wing on the second floor was nicknamed "Feldherrenhügel," or "the general's hill." His confidant Ernst Hanfstaengl later said, after having visited Hitler, that he felt as if he had "walked into a delicatessen. There was fruit and there were flowers, wine and other alcoholic beverages, ham, sausage, cake, boxes of chocolates and much more." Despite having gained a significant amount of weight as a result of his lavish diet, Hitler apparently turned down Hanfstaengl's suggestion that he get some exercise.

The details that are now emerging are unlikely to prompt a rewriting of history. But according to the Bavarian state archives and the Munich state archives, where Hitler's estate and the incomplete Landsberg Prison records are kept, the newly discovered papers provide "an impression of Hitler's intensive contacts and his opportunities to be in contact with people." Officials at the archives also say that there are "no questions" as to the authenticity of the material. Nevertheless, the documents have yet to be studied in detail.

Found in a Flea Market

They are being sold by the owner of a taxicab company, whose father apparently purchased them in the late 1970s, together with books from World War I, at a Nuremberg flea market.

It is quite possible that the documents were stolen when the Americans established a prison for war criminals at Landsberg in 1946, or that they were pilfered during the Third Reich, when Hitler's followers turned his cell into a pilgrimage site and a memorial to his supposedly harsh imprisonment.

A transcript of a letter to Jakob Werlin, a Munich car dealer, also reveals Hitler's true living conditions at Landsberg. Long before his release, on Dec. 20, 1924, due in large part to the efforts of Warden Leybold, Hitler was already thinking about what type of car to buy: a Benz 11/40, which "would meet my current requirements," or a 16/50 with a more powerful engine. His preferred color was gray, and he wanted "wire wheels."

Hitler asked the car dealer for preferential treatment. He wrote that he would probably have to obtain a loan for the purchase, and that the "court costs and legal fees" he owed were making his "hair stand on end."

In the letter, Hitler asked Werlin to inquire at his main office as to "what sort of a discount you can give me."