Almost a year after the devastating bombing of two tanker trucks hijacked by the Taliban near Kunduz in northern Afghanistan, the German military has found a way to compensate the relatives of civilian victims. During multiple discussions in recent weeks, almost all of the 102 families identified by the German armed forces, the Bundeswehr, agreed to accept a one-off payment of $5,000 (€3,800). The money will be paid into accounts with the Kabul Bank, in an attempt to stop the Taliban from seizing the money from the families.

The new solution follows a long period of negotiations, which also involved lawyers who claimed to be representing the victims. In the end, the Bundeswehr opted for its own solution, which expressly does not include an admission of guilt on the part of German soldiers. Instead, the military is emphasizing that the $5,000 is a so-called ex gratia payment -- in other words, a voluntary payment that does not recognize any liability.

The Bundeswehr has been criticized for its handling of the affair. Initially, the army did not take action on the case and -- contrary to clear NATO regulations -- did nothing to investigate the results of the air strike, which was ordered by German Colonel Georg Klein on Sept. 4, 2009.

Instead, the Bundeswehr behaved for months as if there had been no civilian casualties. When the military was finally confronted by a German-Afghan lawyer over the incident, it did not have a clear overview of the situation.

Most Victims Were Civilians

The new solution reflects the wishes of Defense Minister Karl-Theodor zu Guttenberg, who assumed office in late October 2009, several weeks after the bombing. In May, Guttenberg had made it clear that he wanted a resolution to the case. At the time, SPIEGEL reported on the minister's plans, which foresaw paying about €4,000 per victim.

In the early hours of Sept. 4, 2009, Colonel Klein ordered US jets to bomb two tankers which had been hijacked in the Taliban-controlled district of Chahar Dara. Up to 142 people died in the attack. It is now known that the victims included many more civilians, who were trying to siphon off fuel from the tankers, than Taliban. Most of the extremists had already left the river bed where the tankers were located, fearing an attack by the fighter jets that were circling the area.

Relying on a Journalist

The case has revealed a woeful lack of local knowledge on the part of the Bundeswehr. Indeed, the German army ultimately had to rely on the help of journalists to determine the number and the names of the civilian victims. The Defense Ministry contacted Christoph Reuter, a reporter for the German newsmagazine Stern who had painstakingly researched the number of civilians killed. He documented his work in a moving photographic exhibition which tells the story of each victim. Defense Minister Guttenberg visited the exhibition personally.

Reuter's figures are the basis for the current compensation. The Bundeswehr is paying money to the families of 91 dead civilians. A total of 11 seriously injured victims of the bombing are also receiving payments.

The Bundeswehr's numbers are far lower than those of the Bremen-based lawyer Karim Popal, who has always spoken of 179 civilian victims. The Defense Ministry, however, has serious doubts about Popal's research, especially after the lawyer demanded a hefty fee of around €200,000 on top of the €7 million compensation he wanted for the victims. It is unclear how Popal will react to the current agreement with the victims. He has threatened several times to file complaints in various courts, as have other lawyers involved in the case.

Bundeswehr lawyers, on the other hand, believe that the German government's recent reclassification of the mission in Afghanistan as a "non-international armed conflict" -- in other words, a war -- means that the victims of the bombardment no longer have any legal claims. Nevertheless, the Bundeswehr did not insist that the victims forfeit any future legal claims in return for receiving the ex gratia payments.

So far, the victims' relatives have apparently reacted with satisfaction to the news. According to a report by Reuter, the families are "relatively pleased and, more than anything, surprised." "We thought nothing was ever going to happen," said Abdul Daian, whose son died days after the bombing from his burns, as quoted by Reuter. "It is good that we are now being compensated." Daian welcomed the idea of placing the money in bank accounts. "Otherwise we would probably not have seen much of the money." The Defense Ministry is now hoping that the case will be closed once and for all.

The victims' lawyers, however, have reacted to the Bundeswehr's action with surprise and annoyance. "The way in which the Bundeswehr went behind our backs and negotiated directly with our clients is strange," said the Bremen-based lawyer Bernhard Docke, who has been working with Popal on the case. Docke said the compensation was "overdue," and stressed that, in comparison with other cases, the payment was "a relative pittance."

The lawyers are now considering how best to proceed. "We assume that our clients will want to lodge further claims against the German armed forces," Docke said. "If these can not be achieved in further negotiations, then they will want to resolve the issue in court." On Tuesday, before the announcement of the compensation, the victims' lawyers had already made an appointment with the Defense Ministry to discuss the issue. 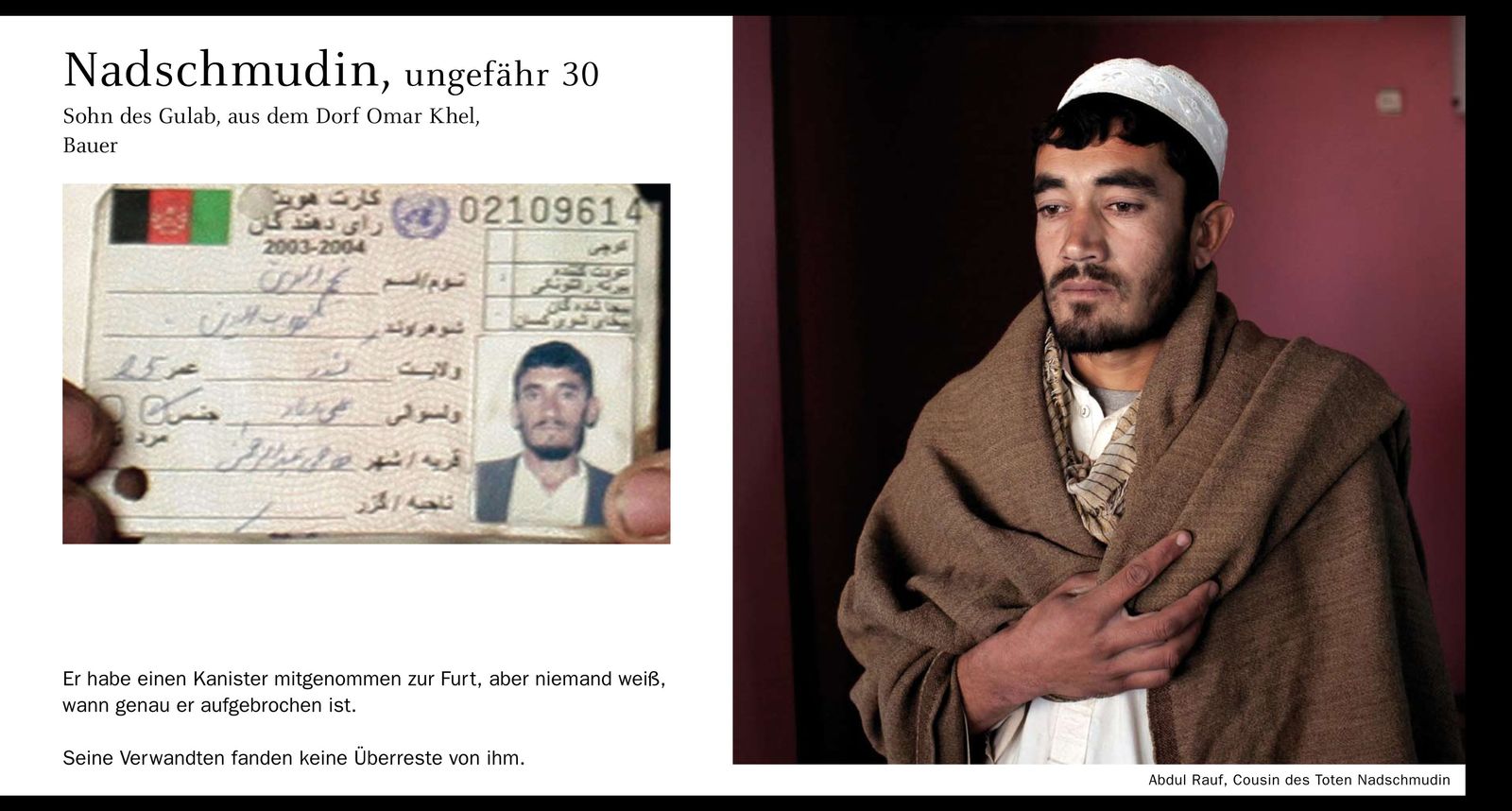 A photographic exhibition by the journalist Christoph Reuter tells the stories of the victims of the Kunduz bombing. Now their families are to receive compensation.