The governor of the German state of Thuringia, Dieter Althaus, was charged with involuntary manslaughter by an Austrian state prosecutor on Monday following his ski accident two months ago in which a woman died after colliding with him on a ski slope.

The spokesman for the prosecutor's office in the town of Leoben, Walter Plöbst, said Althaus had made a written statement accepting responsibility for the accident on New Year's Day on the Riesneralm slope in south-eastern Austria.

That statement constitutes an admission of guilit, the prosecutor's office said.

The district court declined to confirm whether Althaus had admitted guilt, but court spokeswoman Sabine Anzenberger told SPIEGEL ONLINE: "Of course such an admission would lessen the sentence." Involuntary manslaughter carries a maximum sentence of one year in jail in Austria. 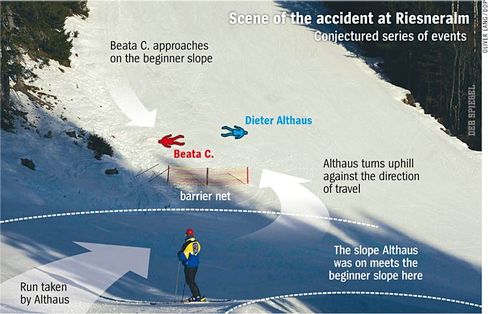 Graphic: The series of events at Riesneralm.

Althaus, who sustained a serious head injury in the accident, has said he has no recollection of what happened.

The 41-year-old Slovakian woman he collided with died on the way to hospital.

Althaus may not have to attend the trial. He is currently recovering in a clinic on Lake Constance in southwestern Germay.

It remains unclear whether Althaus, a member of Chancellor Angela Merkel's Christian Democrat party, will be able to return to politics in time to campaign for re-election in an August 30 state vote.