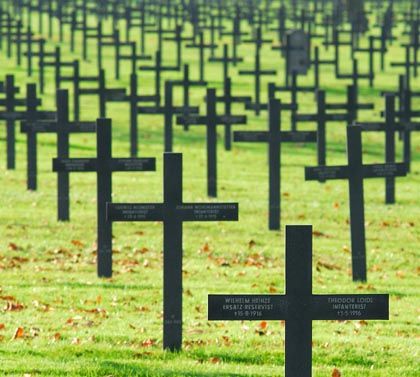 The last surviving German army veteran of World War I is reported to have died in Hanover, aged 107. No official confirmation was available nor is it ever likely to be. Germany keeps no official records on its veterans from the two world wars.

Dr. Erich Kästner, who was born on March 10, 1900, died on January 1, 2008, according to an announcement posted by his family in the Hannoversche Allgemeine newspaper.

According to the Wikipedia online encyclopedia, Kästner was the German Imperial Army's last known veteran of the war. He joined up in July 1918, four months before the end of the war, and served on the Western Front. Only one other World War I veteran is believed to be living in Germany -- Franz Künstler, born in July 1900, who served in the Austro-Hungarian empire's army.

Kästner's family could not be reached and the German Defense Ministry in Berlin said it was unable to provide any information on Kästner. The death notice says he was a retired judge and had earned the Lower Saxony Cross of Merit.

"In Germany such an event doesn't have the same kind of significance as it does in other countries," Bernhard Chiari, a spokesman for the institute, told SPIEGEL ONLINE.

The death on Sunday of one France's last two surviving World War I veterans, Louis de Cazenave, made national and international news. De Cazenave, who took part in the Battle of the Somme, died aged 110 at his home in Brioude in central France, where he was buried on Tuesday.

"His death is an occasion for all of us to think of the 1.4 million French who sacrificed their lives during this conflict, for the 4.5 million wounded, for the 8.5 million mobilized," President Nicolas Sarkozy said in a statement.

"Any form of commemoration of military events is seen as problematic here," he said. "Our veterans only take part in public ceremonies when they are invited abroad to join commemorative events with veterans from other countries. World War I is seen as part of a historical line that led to World War II. You can't equate the two but there is much debate about it."

The Federation of German Soldiers' Associations, which represents the interests of veterans, said it was unable to provide information on Kästner. "The Hanover veterans' association dissolved itself a few years ago and we keep no central records," a spokeswoman told SPIEGEL ONLINE.

An estimated two million German soldiers died in World War I and 4.2 million were wounded. Over one million soldiers from the allied Austro-Hungarian Empire were killed, with 3.6 million wounded.